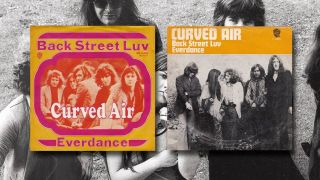 The first British band ever signed to Warner Brothers, Curved Air released two versions of Back Street Luv. The studio one was their sole hit, but four years later they put out a live rendering. The band made their only appearance on Top Of The Pops on September 9, 1971. Also performing on the show were Carole King, The Fortunes, Shirley Bassey, Marmalade and Rod Stewart. At the time, Back Street Luv was number nine at the time. A week later, it went up five places.

Where did the inspiration for Back Street Luv come from?

“When I was 15, I used to skip off school and one day noticed a blond man standing on the steps at the local snooker hall. I became fascinated with him, and ended up chasing and seducing him. He looked like a pop star, although I found out he’d been in prison and had a wife and child. But that didn’t deter me from my interest in him and also some of his friends. However, I could never think about taking him home as my father ran a borstal, and this guy had once been an inmate there. So my dad would know who he was.

“I got found out eventually, and was suspended from my convent school. But the whole episode gave me the idea for the song.”

“It was amazing. When it was released, I recall hearing it on Alan Freeman’s Saturday afternoon show on Radio One, and I had a feeling then it would catch on. It got a lot of radio airplay after that. And people really took to the song.”

“We did, actually. I had been to a Beatles gig at a theatre in Wembley when they got loads of screaming girls. But what we got were screaming boys. We were used to having audiences who would listen to our songs and then applaud. But now they would go crazy for us. We even got to do Top Of The Pops. It was all new territory for Curved Air.”

“It was a blessing. The song seems to reach out to our fans even now. Every time we play it, Back Street Luv gets a massive reaction. Like every hit single, this obviously means something different to each person. I know where it comes from, of course, however the fact it has resonated down the years is a big compliment. It’s a simple song, but then those are often the ones to stand the test of time.”