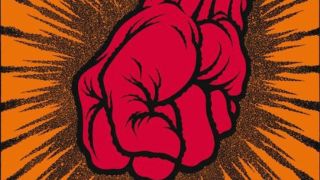 It’s the album most Metallica fans still love to hate. More so than even than Lulu, their collaboration with Lou Reed eight years later. At least with that, the hardcore fans had a ready made hate-figure in Reed to blame it on.

St. Anger, released this week in 2003, was different, though. Recorded at the tail end of a saga that saw the band’s reputation forever tarnished by their, ultimately, losing war against Napster, bassist Jason Newsted walking out after years of being the bitch of the band, singer James Hetfield spending 11 months in rehab, and drummer Lars Ulrich and guitarist Kirk Hammett so convinced the band was over they were already planning their lives without Metallica, St. Anger was the first album since Kill ’Em All that truly reflected who the people in Metallica were: conflicted, overstretched, insanely rich, and now, suddenly, immensely self-doubting. Musically, the results were far from pretty. Not only were there no guitar solos, the drums sounded machinelike, like an anvil being pummelled. And there were no quieter moments, no ballads, no instrumentals, no place to escape the fearful maelstrom of crazed guitars, rubber-band bass and utterly pained vocals.

Taken piece by piece, tracks like Dirty Window, Invisible Kid and Shoot Me Again were some of the fiercest, most convincingly honest, if musically disjointed moments the band had laid down since the sonically disfigured but brutally forthright _…_And Justice For All 15 years before. Taken as whole, however, which is clearly how St. Anger is meant to work, it was a bitter pill to swallow. “I’m madly in anger at you!” Hetfield wails on the title track; “My lifestyle determines my deathstyle,” he earnestly exhorts on Frantic. When the final track, All in My Hands ends with him repeatedly screaming, “Kill, kill, kill, kill!” the silence at the end leaves you staring into yourself, almost embarrassed.

Metallica’s marketing director told Kirk the album was “a fucking commercial disaster.” Relatively speaking, he was right. Although it reached No. 1 in America and another dozen countries, and No. 3 in the UK, overall St. Anger sold approximately half what their previous album, S&M, had done.

Yet zillion-dollar sales, or throwing the horns, were not what St. Anger was about. Historically, it has more in common with equally misunderstood, even loathed albums as Neil Young’s Tonight’s The Night, David Bowie’s Low, John Lennon’s Plastic Ono Band; as feral as the demented Funhouse by the Stooges; as self-pitying as its blood-cousin, In Utero by Nirvana. Albums that reflected the huge personal crises the artists had gone – or were still going – through but which everybody else originally found impossible to listen to without wincing, or simply taking them off, infuriated that they didn’t fulfil their remit and entertain in the conventional manner.

The reason the album sounds so fragmented, James told me, was because that’s “exactly where we were at that point… It’s more of a statement than an album to me. Here’s what’s going on in our lives and documenting it, you know? But in that fragmentation it brought us together. So it was a necessary piece of the puzzle to get us where we are today.”

Enter Night: A Biography of Metallica by Mick Wall is available as paperback and Kindle