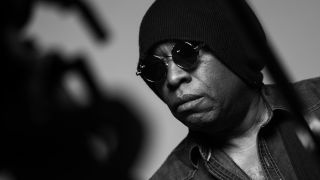 Former Big Country bassist Tony Butler has explained why he left the band in 2012 at the end of a reunion tour and during sessions for the 2013 album the band recorded with The Alarm’s Mike Peters on vocals.

Butler launches a solo career this month with an appearance at London’s Borderline on Wednesday 22 November, with a forthcoming solo album, My Time, and autobiography, Then Came The Great Divide, available for pre-order via PledgeMusic.

Butler tells TeamRock: “The point about writing this book was to explain, in detail, why I eventually ended up leaving the band for good.”

Butler and his drumming partner Mark Brzezicki were drafted into an early version of Big Country around 1981, after initial demos had failed to impress record companies. The new four-piece – led by singer/guitarist Stuart Adamson and guitarist Bruce Watson – clicked instantly and, signed to Phonogram, hit singles like Fields of Fire, Chance, Wonderland and Look Away, made them one of the biggest rock acts of the 80s, touring with the Rolling Stones and Queen, playing Russia’s first international rock festival and recording eight studio albums before singer Stuart Adamson took his own life in 2001.

The band reformed in 2007 to celebrate 25 years and then toured in 2010-11 with Mike Peters of The Alarm on vocals. Butler left in 2012, with no real explanation, to be replaced by Derek Forbes, formerly of 80s contemporaries Simple Minds.

“I refrained from commenting directly after I left because losing Stuart was a seismic ordeal that I don’t think any of us knew how to deal with,” says Butler now. “Re-involving myself in 2007, and again in 2010 was more to do with me not being selfish – I still felt emotionally involved with Bruce and Mark, and didn’t want to let them down when the opportunities looked promising.

“Without delving into the content of the book, a few things happened along the way from 2010 to 2012 that made me confront my own feelings and ambitions. One thing was that I wasn’t sure the material was there when we tried writing.

“I was always of the opinion that for the band to go forward, it had to come up with songs that were not only great but would withstand scrutiny from those who thought that the band could not function without Stuart. A band that was not looking to go forward in this way was not a band that I could be in. Hence my own album.”

Butler’s departure also coincided with the band parting ways with Ian Grant, the man who had managed Big Country (and Adams’s previous band The Skids) from inception. Butler suggests that internal in-fighting was another reason for his departure. “My former colleagues wanted to dispense with the management services of Ian Grant,” he says, “although this is something Mark has since denied.

“The guys have continued to work as Big Country, but I didn’t want to be involved in something that, for me, was not creative and forward thinking”.

Tony Butler plays London’s Borderline on Wednesday 22 November. His solo album and autobiography, Then Came The Great Divide, are available for pre-order via PledgeMusic.

The Life and Hard Times of Big Country and Stuart Adamson