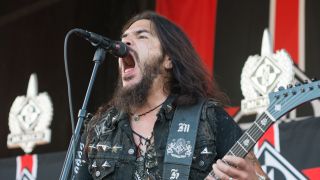 Robb Flynn, 48, is the frontman for Oakland metallers Machine Head. The band’s latest album, Bloodstone & Diamonds, is out now.

“If there was a band that affected me early on and took me down the rabbit hole, it was Black Sabbath. The first time I heard We Sold Our Soul for Rock ‘n’ Roll [Black Sabbath compilation album] I was terrified, fascinated, and enthralled – all at the same time. It was so evil and dark, and there were songs about smoking weed and doing cocaine, and wicked women and the devil. I had a friend who lived on the next street when I was growing up, and his dad smoked weed, so we’d cut school and go raid his dad’s stash and listen to Sabbath.”

**“I love Brian Johnson, but there’s something really special about Bon Scott. **You hear rappers go on about swagger. But you watch Bon Scott footage from around the Powerage [1978] album, and my God that dude’s got swagger. In some ways I envy singers who don’t play guitar, because I’m kind of stuck there in front of the microphone. You watch Bon Scott work a stage, and he’s up there just peacocking, man. He’s got the super tight pants and his package is hanging over to the right, and you’re just like, ‘Fuck, you’re awesome!’ He’s gnarly, and sexy, and a real bad ass. That, to me, is real swagger. The rappers don’t even know what swagger is. He’s the ultimate rock frontman.”

“**There was something dangerous, thrilling, and exciting about thrash concerts in the ‘80s. **I saw D.R.I. on the Violent Pacification [1984] tour, and that was full of burly, linebacker-sized skinheads. My friend Leeroy and I went with these two girls that we knew, and we were the only guys in there with long hair. We walked in and sat down, and we were trying to just hang at the back and not get in anybody’s way. I remember watching that show, and it was just 45 minutes of people fighting. There were all these skinheads on speed who would take broken bottles and cut themselves, and smear all the blood down their face. It was brutal. And it could be very dangerous. You really had to know the wolves from the sheep. But I survived it, and all I wanted to do was go to more thrash shows after that.”

“Slayer and Metallica didn’t tour together for 30 years for a reason. They talked shit about each other like crazy. They really didn’t like each other, man. One was always trying to be faster, and one was always trying to be better. And so much of that inspired me. I never wanted to ‘make it’ – whatever that means. I wanted to be the best. I wanted to be the best frontman and the best guitar player in the best band. It was always about making a better album than the other band. Whether we succeeded or not was for the world to decide. The intention was just to be the best.”

“Going in to the first Machine Head record [Burn My Eyes, 1994], I was a drug dealer running around with guns. I was leading a pretty hairy life. I was dealing speed to make ends meet, and I just happened to be good at it. I wasn’t getting high on my own supply. But it got to a point where it started getting big, and I seriously freaked out. I decided I didn’t want to do it anymore. It was never really what I wanted. I always wanted to play music and be on stage. So I stopped. And I was like, ‘This Machine Head shit better work!’ I invested all my money into the band. And somewhere along the line we wrote some good songs, and people took notice. We got signed and went into the studio, and I poured my life into that first record, and gave it everything I had.”

“**In my experience, the best musical moments are when you just let the music guide you. **It’s scary, because you don’t know where you’re going. But in the end the unknown is exactly what makes it so cool. When we started writing _The Blackening _[2007], we wrote for about five months and there was no indication that we’d suddenly start writing these long songs, because the first four songs we wrote ended up being the four shortest on the record. And we tried trimming the fat and shortening the longer ones, but it sucked. It was like taking all the loops out of a rollercoaster. So we just went for it and hoped that everyone would get it and enjoy the songs. You never know how it’s going to be received. You just have to trust your gut and go with it. And we did. If you’re going to aim for something, aim for the stars, right?”

**“I remember exactly where I was when I first read the article that inspired Aesthetics of Hate. **We’d just finished up an 80 day tour around the world, and on the last day I got a brutal sinus infection. I was in Greece, and I had to take three flights home. On the first flight my head hurt so much it felt like someone was driving a screwdriver into my eardrum. I was getting ready to change for the second flight, and I asked the stewardess if she had any decongestant. She said I had to leave the plane because I was too sick to take the next flight. I’d been on tour for 80 days and I just wanted to go home, so I refused to get off. She went and got the captain, and he told me that I had to get off otherwise my eardrum was going to explode. He said if I went up I risked bursting it, and it would take six months to heal. I was dumbfounded. So I had to go and heal for five days before I could take another flight. I ended up in a hotel in Zurich, Switzerland, and I had nothing to do because I was alone so I ended up looking on Blabbermouth to read about Dimebag’s murder, which had just happened. I was catching up on everything when I got to that article [Aesthetics of Hate: R.I.P. Dimebag Abbott, & Good Riddance by William Grim]. It was such an emotional time, and everything about it was so horrible. Then, to read that fucking article? To read that! I was like, ‘Fuck this mother fucker! Fuck this dude forever!’ There was even American senators out there, saying stuff like, ‘That’s what you get for playing metal music. You reap what you sew’, and all this other bullshit. I was so fucking pissed. So that’s where Aesthetics of Hate came from. I never really heard what our peers thought, and I never asked them. But I remember the first time we played the song and Rita Haney, who was Dimebag’s partner, was there at the show. I didn’t really know her that well, but I said that I’d really like her to be up there and catch us play the song. She stayed and watched the whole show, and afterwards she was crying and she came up to me and gave me a hug. That was the coolest feedback I could’ve hoped for.”

“Maybe it’s because I’m adopted, but the thing that I want most from music is a connection. I want to watch how people react to what I write, and feed off that energy. ”