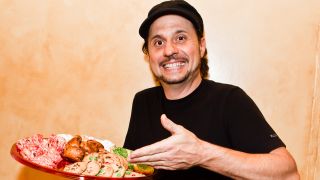 Dave Lombardo, 51, is best known for being the drummer and co-founding member of Slayer.

He drummed with the Huntington Park quartet from 1981 until 1992, before quitting the group to spend time with his first-born child. He later rejoined the band in 2002, but was fired 11 years later. To date, he has recorded seven studio albums with the thrash legends, as well as three live albums and an EP.

Lombardo has also played in a number of bands: Grip Inc., Fantômas, Philm and Testament. He’s currently a touring member of Suicidal Tendencies.

Here’s what’s on his mind…

“In 1958, my mom and dad sent my two older brothers to the States. It was with this program that was offered by the school system, called the Peter Pan Program, and about 15-17,000 children were sent from Cuba to America. Can you imagine being 10 years old and your mom and dad saying ‘We’ll see you in five months’? Well, within those five months the Cuban Missile Crisis happened, and my brothers were separated from their parents for five years. I was conceived during that time, so I was born in Cuba. When I was two years old, we moved to the States and the family was reunited.”

“There was always love for music in my house. I feel there’s also something genetic in me. I don’t know what it is but I have a deep love for music. My oldest brother liked R&B so he was very much into Chaka Khan, Tina Turner, War and acts like that. My second oldest brother Danny, who I think was the one who actually put the idea of drumming in my head, was into Zeppelin, Cream, Janis Joplin, Jimi Hendrix and all the classic rock bands. He was also into all those blues-influenced British artists like John Mayall. He used to come home from work and of course his little punk brother wanted to mess with his older brother, but he’d be tired from a long day so he’d turn on the stereo and play Ginger Baker’s Toad. He’d then set up little boxes and put pencils in my hand and I’d play along. He played drums as well, and he played in a band for a while, but when he heard me able play at such a young age he gave up. He said, ‘This isn’t for me. You must be the drummer in the family.’ And percussion has been a part of my life ever since.”

“I was still in high school when we started Slayer. There were these local musicians that I used to hang out with that were in a band called Sinister. They’d come over to my house and jam because I was only sixteen years old and I couldn’t play the clubs. My parents were very protective of me as well. So they’d come over to my house and we’d hang out and listen to music, and they told me there was a guy that lived about four or five blocks away who had a bunch of guitars. One day I drove by there and met this guy with curly hair. It was Kerry King. He was watering the grass and I pulled up and said, ‘Hey man, I heard you play guitar. I play drums. Do you wanna jam?’ That was my personality. I was always searching for drum sets in the neighbourhood or musicians to hang out and jam with, because that was my passion. He said, ‘Do you wanna come by tonight and check out my guitars?’ So we met up that night, and sure enough he had all these guitars laid out on the floor. I was impressed. He gave me a list of songs that he knew as well, and there were a lot of songs on there that I was familiar with. That impressed me, too. So we got together in my garage and covered some of the songs on his list, and it felt really good. After a couple more sessions Kerry said to me, ‘I know this other guitar player, I think it’d be good to jam with him,’ and that was Jeff [Hanneman]. All three of us played together in my garage a couple of times, and Kerry was playing with Tom [Araya] in another band called Quits. He brought Jeff and I over to Tom one day and said, ‘Hey man, check these guys out. We’ve got a new band!’ I guess they were tired of getting nowhere with the guys that they were playing with, so we got together and played for Tom and it all went from there – the magic was born.”

“Rick Rubin loves all styles of music. You can tell that from his repertoire. He definitely took Slayer to the next level as well. He was the one that showed the world what we really were, and he really defined our sound. Reign in Blood [1986] was a lot of fun to make, too. There was all kinds of shit going on in the studio. I remember one of the guys from D.R.I. showed up one day – Felix the drummer – and he passed out. That’s just something you don’t do. It’s an open door for a lot of nasty shit to happen. He had to take a flight the next day, and we got a Sharpie and drew all over his face. He couldn’t wash it off so he had to go on the plane with the word ‘dick’ on his forehead. It was a real party atmosphere but we always got the work done, and I’d never worked with a producer of that calibre before. He really taught me a lot, and some of the advice that he gave me still resonates today – as a drummer and a producer. So it’s definitely an honour to have worked with Rubin. And I think the power of Reign in Blood really came from the mixes and recordings that he narrowed down. He really honed in on the band’s sound, and thanks to him we were able to release a career-defining album that put the band where it is today.”

“My decision to leave Slayer was a personal one. We’d been touring a lot and my wife at the time was pregnant with our first son, and I wanted to be there. That’s the norm today. Bands say, ‘Let him go and we’ll just go ahead and tour with this other guy,’ and then you come back. But no, they decided to get rid of me and that was it. So I went on and created with Grip Inc. and Fantômas. I also worked with Testament, DJ Spooky, John – the list goes on. I really enjoyed the recording of Stand By Me that I did with Lemmy as well. That was a really cool production by a friend of mine called Piers Baron, who’s from London. Sadly I was never actually in the studio with Lemmy. I recorded my drum parts and he then took it to Lemmy, who played bass and sang on it. But I loved being a part of it. I did several tours with Lemmy back in the day and he knew me by my first name, so that was awesome. Mike Patton and Buzz Osborne are supremely talented beings, too. Igor Cavalera was actually Mike’s first choice as the drummer for Fantômas, but Igor heard the songs and said ‘You need to call Lombardo. This is more up his alley.’ So Mike contacted me and as he was explaining the music I said, ‘Mike, just send me the tape. I know exactly what you want.’ I felt a connection when he was telling me about it, and when I heard the tape I actually asked him, ‘Why do you want me to record drums for this? It’s already perfect as it is.’ But he wanted the human element and feel in the music, and he also wanted to perform it live. We went on to make four albums together, and there’s possibly more to come.”

“Rejoining Slayer was amazing. It was so much fun. It was like coming full circle again, as if no time had been lost. And working on those new records was great. To me, Reign in Blood and World Painted Blood [2009] are the two best Slayer albums. World Painted Blood was Jeff Hanneman’s last full effort, and he really contributed to the majority of the songs. He was there in rehearsal all the time and there are a lot of good memories from those sessions for me. I think those two albums are phenomenal. My lasting memory of Slayer is The Big Four shows that we did. Those were amazing. That was such a phenomenal point in my life, playing venues like Yankee Stadium with all of those bands. All those guys are incredible human beings and great musicians, and the camaraderie amongst everyone was amazing. We’d all peek into each other’s dressing rooms and say hello. There’s a video somewhere of Anthrax and myself invading Megadeth’s dressing room. They had a little practice area set up, so we went in and started jamming Whole Lotta Rosie [laughs]. It was such a great time, and the memories that I have are phenomenal. Obviously, I miss those guys. It’s been a while, but I’ll see them again no doubt. It just takes time to rebuild. But I’m sure we’ll be on stage together again some day.”