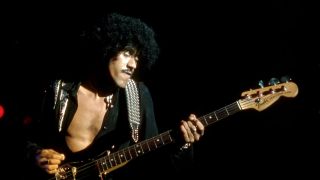 Thin Lizzy [named, like all great rock’n’roll bands, after a big, shiny car] sparked to life in 1970 as a trio of Dublin freakniks who played a Mulligan’s stew of traditional Irish folk mixed with bluesy rock’n’roll.

Led by the charismatic Phillip Lynott, a rare black Irishman with a wild, Hendrixy Afro and a mischievous glint in his eye, the young, scruffy group struggled to find their way until they discovered the simple pleasures of searing hard rock, soaring twin-guitar harmonies, mirrored basses and impish moustaches.

By the mid 1970s, the world had caught on, and the little band from Dublin became one of the best-known, and beloved, arena rock bands of all time. Thin Lizzy lived as hard as they played, and for every significant step forward in their career there was a crushing setback.

The band went through guitar players faster than most guitarists go through strings. The endless world tours took a physical and mental toll on the band. The members were plagued by poor health, erratic behaviour, violence and, in the case of their gregarious frontman, crushing chemical addiction. And yet they endured, enthralling audiences with their hard-driving tales of vagabonds, kings, fools and madmen.

If ever there was a rock band for the people, it was Thin Lizzy. Ah, but nothing lasts forever. Burdened by dwindling record sales and racked with addiction and dysfunction on all sides, Thin Lizzy finally called it quits in 1983.

Lynott and drummer Brian Downey formed the short-lived Grand Slam, hoping to build a new Lizzy out of old parts, but a disillusioned Downey threw in the towel within a year, effectively slamming shut the Thin Lizzy book for good.

On Christmas Day, 1985, Lynott collapsed at his home and was rushed to hospital. He passed away a few days later, on January 4, 1986. The official medical report cites heart failure and pneumonia, brought on by a drink and drug binge. Some, though, would contend that Lynott died from a broken heart, still mourning the break-up of his beloved Thin Lizzy.

Ironically, the band would reunite 10 years later, with Lizzy guitarist John Sykes also handling vocals, and various other ex-Lizzies hopping on and off at different points. They then morphed into Black Star Riders.

As for Lynott, a handsome statue of him was unveiled in Dublin in 2005, commemorating their fallen rock’n’roll son. And the years have been kind to the man’s legacy and his music.

This is the album most people think of when the topic of Thin Lizzy arises, thanks to the worldwide smash hit The Boys Are Back in Town. Uplifting, heroic, poetic and occasionally bare-knuckled, Jailbreak is the quintessential 70s riff rock album, full of timeless, rough-’n’-ready rockers like Warriors and Emerald, as well as the infectious, surprisingly tender love song Running Back, and the timeless fan favourite Cowboy Song.

Little known fact: the cover artwork, intended to convey a vague sci-fi theme explored in the original sleeve notes by Phil, was designed by Jim Fitzpatrick, the same guy who designed that iconic poster of Che Guevara from the 60s.View Deal

Guitarist Gary Moore and Phil Lynott were bandmates in the late 60s prog rock outfit Skid Row, and Phil lent his bass and voice to Gary’s first solo album, so Gary returned the favour and joined Thin Lizzy when Brian Robertson skipped town. Moore’s amazingly fluid guitar lines merged seamlessly with Lizzy’s chunky, funky hard rock, resulting in an almost perfect collection of songs on Black Rose, including the hits Waiting For An Alibi and Do Anything You Want To.

The line-up with Moore was short-lived, however. His solo career was taking off, and he quit the band among much public squabbling before the year was out. Still, Black Rose remains one of Lizzy’s very best albums.View Deal

Superior - The ones that helped cement their reputation

The double live album with gatefold sleeve had become a dino-rock cliché by 1978. But Thin Lizzy revitalised the tired form with this jaw-dropping live set, recorded with the classic Roberston/ Gorham line-up. Okay so some of it was overdubbed in the studio later [well, this was denied at the time by Lynott, and more recently by Gorham], but nobody knew that in 1978, when blistering renditions of Lizzy classics like Jailbreak and Don’t Believe A Word poured out of speakers all summer.

Befitting the album’s title, Thin Lizzy sound like street-tough rock’n’roll warriors on Fighting. Gone were the lighter folk, soul and blues touches, in favour of simple, head-banging pummel. The Robertson-Gorham slam-boogie meltdown was in full effect, and Phil’s soulful growl punctuated hard-luck stories like Suicide and Ballad Of A Hard Man and rabble-rousing anthems like Fighting My Way Back.

Still a year from the fame and fortune that 1976’s breakthrough Jailbreak would bring them, this is the sound of a hungry Thin Lizzy. On Fighting they sound as much like a riot-ready gang as Guns N’ Roses did in 1987. But they had better moustaches.View Deal

Astute punters will notice that there are only three faces on the cover of Bad Reputation. This is what happens when you piss off Phil Lynott. Brian Robertson severed an artery in his hand during a bar-room brawl on the eve of the Jailbreak tour. He recovered in time to play guitar on Bad Reputation, but his role in the group was severely diminished.

This, then, is Scott Gorham’s Thin Lizzy, a decidedly lighter, poppier and altogether more American version of the band. Featuring the finger-snapping hit Dancing In The Moonlight and a clutch of dreamy downtown rockers, Bad Reputation is Lizzy at their breeziest.View Deal

Thin Lizzy’s last stand. By this point drugs and alcohol had so poisoned the band and its main players that a break-up was not only inevitable but also necessary if any of them hoped to survive the 80s. Seeing the writing on the wall, Lynott concocted this fiery ode to hard times and harder living, and presented it as a explosive parting shot.

Aided and abetted by guitarist John Sykes, Thunder And Lightning is Lizzy’s heaviest record, full of fast an’ furious rock like Cold Sweat, Heart Attack and the pounding title track. Ironically, the band sounded more alive and vital on this album then they had in years.View Deal

Vagabonds Of The Western World (Deram, 1973)

1973 was a weird year for Thin Lizzy. Lynott almost left the band to join an ill-fated Ritchie Blackmore project. And when that fell through, the band recorded an entire album of Deep Purple covers under the name Funky Junction.

But Lizzy pulled it all together by mid-year. Still a three-piece with original guitarist Eric Bell, Vagabonds… was Lizzy’s first foray into hard rock, melding traditional Irish folk with funky riff’n’roll. Songs like the vampy Gonna Creep Up On Ya and the classic bad-ass anthem The Rocker paved the way for the full-blown arena rock to come.View Deal

The loss of guitar giant Gary Moore somewhere on the road in 1979 might have been a fatal blow to lesser bands, but the ever-scrappy Lizzy simply moved on, bringing in the unlikely Snowy White, whose fluid, bluesy playing resulted in a lighter, frothier version of Thin Lizzy.

Chinatown is a throwaway album, really, full of simple bar-room rockers like Having A Good Time and Sugar Blues, but it’s a great listen for Saturday night, especially when carousing and punch- ups are on the menu. The Jack the Ripper-themed Killer On The Loose caused some controversy at the time, since the Yorkshire Ripper was still, well, on the loose.View Deal

The first Lizzy album to feature the twin-guitar attack that the band were later known for, from new recruits Scott Gorham, a skinny, American who narrowly escaped a tenure in Supertramp, and Brian Robertson, a fresh-faced teen from Scotland.

Nightlife is one of the band’s most accomplished early albums; an eclectic collection of bruising boogie rockers and slower, more soulful songs like the tender She Knows, Showdown and the rainy title song. Both the Cream-like blues rocker Sha-La-La and the slow-burning ballad Still In Love With You became enduring live favourites.View Deal

Thin Lizzy never really made an album bad enough to avoid. The only one that comes close is the ill-conceived Renegade, a dicey collection of downer-rock tunes heavy on Darren Wharton’s prog rock keyboards, and a surprisingly apocalyptic world view from the normally optimistic Lynott. It’s no wonder, really, as the band were fractured and failing at the time, with Scott Gorham in poor health.

The album is remembered mostly for the [very] minor hit Hollywood (Down On Your Luck). Renegade is the sound of a weary, battle-scarred Lizzy on the brink of collapse. Still, it retains a desperate, grubby charm.View Deal