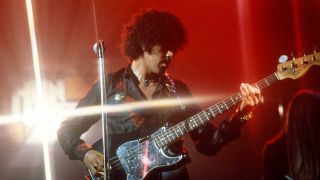 It may be difficult to believe, but Thin Lizzy came very close to dumping what went on to be arguably the most iconic song of their career.

“We had demoed about fifteen tracks for what became the Jailbreak album, and we’d selected those we felt were the ten best ones,” explains guitarist Scott Gorham. “Then our co-manager Chris O’Donnell came down to listen to the songs, and we played him all fifteen. He picked up on something we’d titled GI Joe, but we had already rejected it as not good enough for the album.

"He liked it, and told us that we should include it. We accepted his judgement, but there was still work to be done, because the lyrics were anti-war, which wasn’t really right for us, and musically it wasn’t there. However, we sorted it all out, and GI Joe turned into The Boys Are Back In Town.”

Gorham remembers vividly when he first heard the idea that would turn into this seminal track: “I was at Phil Lynott’s house, and we were in his living room, going over songs we’d been working on for the album. At the end of the sessions, Phil played me this bass line and asked what I thought of it. He then started to scat sing some lyrical notions he had in his head. From there we fleshed out a verse and a chorus.

“It was just Phil and me involved. But the next day at a band rehearsal, all four of us – including Brian Robertson and Brian Downey – played through the skeleton of the track. Brian Downey did this shuffle on the drums, and that’s when things began to take shape. Because I got the idea from him for what became the guitar harmony you hear now. We had an eight-track recorder in the rehearsal room, which was used to demo songs, and that’s when we did the version of GI Joe which our manager heard and liked.”

However, the song still wasn’t fully realised when Lizzy went into Ramport Studios in South London during late 1975 to record the Jailbreak album with producer John Alcock. “No, it wasn’t a complete track even by this time,” Gorham recalls. “We actually still didn’t have the title. But then one day. Phil came into the studio and said he wanted to call the song The Boys Are Back Town.

"He also had the lyrics written, and I read through them, thinking: ‘Hey, now this is fucking cool!’ Brian Robertson and I then got the guitar harmonies finished to our satisfaction. Although the guitar part in the middle of the song that helped to make it work so well came from Phil. He played it on the bass, and then Brian and I adapted it to the guitar.

“I have to say that recording this track was a pretty quick process. It wasn’t easy, but nor was it too hard.”

There was no belief from the band, though, that what they had was the game changer it would soon become. “To us, this was a decent album track, no more. We certainly did not think it could be a single!”

What happened next was a happy accident, as the finished The Boys Are Back In Town took on a life of its own. “We were out in America touring in 1976. We had no fan base there, and had achieved no success at all. But two radio DJs in Louisville, Kentucky heard the Jailbreak album and began to play it on air. They especially loved The Boys Are Back In Town, and gave it multiple spins every day.

"People then began phoning the station, requesting the song. Then other radio stations picked up on it and also gave it a lot of exposure. Suddenly it was everywhere. The States, it seemed, had fallen in love with this tune.”

It was at this stage that Thin Lizzy’s US label, Mercury (in the UK they were on Vertigo), decided to put out The Boys Are Back In Town as a single.

“If you listen to what the record company say now, of course they take full credit for releasing the single,” says Gorham. “But it was the backing we had from radio stations up and down America that forced their hand.”

Despite the enthusiasm of those DJs, incredibly the band still had little faith in the track, as Gorham amusingly admits. “One night, Chris O’Donnell came into our dressing room while we were touring in the States and said: ‘Well, guys, it looks like we have a massive hit single on our hands.’ We just said to him: ‘Hmm, maybe it’s time to put this song into our set.’ Can you believe we weren’t actually playing it live at the time? Leave it to musicians to get things wrong!”

For the band, the success of The Boys Are Back In Town was never going to lead to a repeat of the formula in the search for another hit.

“Sure, there was some pressure from the label. But that was never gonna work for us,” says Gorham. “Every album we did was different, and we were not the sort of band who would follow a formula, however successful it might have made us.

"I think this is what true fans loved about Thin Lizzy – the fact we were unique. But it inevitably prevented us from appealing to a mass audience the way in which Styx or Journey did at the time. That’s part of the reason why we never became a big name in the States.

“The most important impact The Boys Are Back In Town had on us as musicians was that it allowed the band to make further albums and to continue developing our style. Jailbreak was our third for the label, and it really was make or break. If it hadn’t sold, then I’m sure we’d have been dropped, and who knows what would have happened.

"As it was, The Boys Are Back In Town ensured the album sold well and therefore we could carry on. We owe a lot to that single, and to the foresight of Chris O’Donnell and those DJs in Louisville, who saw in it something we as a band had missed."