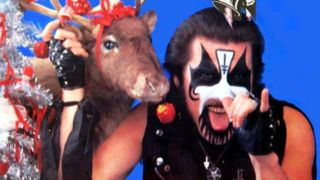 We've polished off the brandy, scoffed the chocs and someone is cracking open the Advocaat– it must be Christmas! But here at Metal Hammer we're not fans of the usual Christmas carols or listening to Wham! for the tenth time that day, instead we fancy something a little heavier at this time of year.

King Diamond – No Presents For Christmas

Even on his debut solo endeavour, you can trust the King Diamond to tackle such credibility-baiting seasonal high-camp with fearless conviction, nailing the inherent comedy of the concept while still offering up an explosive Christmas cracker of a tune that stands up with his best work, a righteous heads-down barrage of infectious theatrical heavy metal that puts fists in the air and delirious grins on the face.

Bad News – Cashing In On Christmas

In the words of Bad News bassist Colin Grigson – aka much-missed comedy legend Rik Mayall – “My uncle owns the record company and he assures me that was heavy metal.” A perfect parody of the artistically bankrupt cash-in Christmas single, this artfully awful ditty is best heard on Bad News’s 1988 Bootleg album, with the band arguing all over the playback (“We’re a heavy metal band, we’ve still got some credibility haven’t we?”).

Effectively a Christmas carol invaded by crazed, occult death metal brutality, Floridian sci-fi nutters Nocturnus give a surprise twist to the story of the first Noel, the birth of baby Jesus: a robot from the future turns up with a bloody big gun to erase Christianity at its source. How many metalhead parents would like to cast their own kid as the assassin in their junior school Nativity play?

With this direct blast of belligerent punk-metal, Germany’s drunkest thrash hooligans take a cynical swipe at the rampant corporate exploitation of the festive season, making a fairly serious political point even while snarling the irresistibly catchy title over grudging sleigh bells (although Gerre delivers the closing line, “He was fucking born in August anyway,” with perfect comic timing).

One of the Drab Four’s mightiest slabs of gloom – and one of Pete Steele’s best vocal performances – Red Water is all frostbitten atmospherics, depressive sleigh bells and radiant seasonal gloom, playing around with the melody and lyrics of God Rest Ye Merry Gentlemen, but the sheer force of the song’s conviction is perhaps more surprising, given the band’s mordant sarcasm and arch self-deprecation.

Christmas Dreams neatly exemplifies this symphonic prog-metal collective’s blend of Lloyd Webber melodrama, stately metallic grandeur and transatlantic schmaltz, but if you want Xmas atmos you’re spoilt for choice with TSO; this is their third Christmas-based rock opera (after 1996’s Christmas Eve And Other Stories and 1998’s The Christmas Attic), and their best-selling, astonishingly certified double platinum in the USA!

Christmas has always been important to Twisted Sister; they were ‘fessing up to stealing the melody from O Come All Ye Faithful for We’re Not Gonna Take It years before they covered the carol, on this fairly excruciating collection of jingle balls. Full marks though for these hilariously tenuous metallised lyrics to The Twelve Days Of Christmas, and especially to the bass and drums going joyously shitnuts.

Even the Metal God snuck out a solo album of Christmas covers when no one was looking, and this galloping, jubilant rendition of the mid-19th century American carol emerges triumphant from the decidedly variable platter, impressing and amusing with its audacity but breathing new life into the familiar school-assembly melodies, with Roy Z a reliably inventive and classy presence on guitar.

“Inspired by the onset of the Christmas period and the onset of emotions and feelings of nostalgia, joy and sadness that the period often evokes,” says Justin Broadrick of this glacial, grinding, bleak midwinter lament, but it’s best heard in early January, surrounded by empty bottles, shredded wrapping paper, dead pine needles and vomit-stained shards of the Twisted Sister Christmas CD.