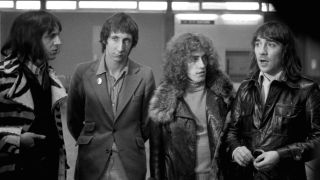 When one considers the greatest British rock bands of all time, The Who have to be right up there. Whether it be smashing up instruments during their powerhouse live performances or creating epic rock operas, Townshend, Daltrey, Moon and Entwistle (and Jones) constantly challenged themselves and their audiences, creating a body of work which continues to inspire. Here are their 10 very best recorded moments…

The last great Who single, which ushered in a new era with Kenney Jones on drums. All the great Townshend trademarks are here: the alluring synth pattern, the power chords, the swift changes of tempo and autobiographical, self-mocking lyrics (’I drunk myself blind to the sound of old T-Rex, who’s next?’). Another mid-life crisis, another Top 10 hit.

From the moment Townshend arm-windmills across the strings for the intro through to the psychedelic hypnotic fade-out, this is a total Who tour de force. Behind it all, Keith Moon is at his flamboyant best, flailing across the kit in a mass of percussive eruptions.

The light and shade of The Who – the delicate acoustic opening paving the way for the high-powered entry of Moon and Entwistle. As the harmonies mount, Daltrey takes total command of the vocal, leading them back to a tranquil close. A brilliant example of Who dynamics.

The big hit single from Tommy – the story of the deaf, dumb and blind kid with crazy flipper fingers propelled them into the Top 20 on both sides of the Atlantic – Pinball Wizard paved the way for a high profile Woodstock appearance. The intro, with Townshend’s gentle acoustic strumming rudely interrupted by Entwistle’s colossal bass riff, is pure theatre. Elton John’s version from the 1975 Tommy movie was also a big UK hit.

Another year, another rock opera. Quadrophenia, Townshend’s mod odyssey, inspired some of their most cohesive playing. This frantically paced tale of mod Jimmy’s pill-popping, speed-fuelled journey on the London to Brighton line is suitably embellished by some excellent piano from Chris Stainton and swaggering horns from John Entwistle.

The grand Quadrophenia finale chronicling Jimmy’s disillusionment with the mod lifestyle, opening with the sound of the sea before a series of plaintive piano chords sets the scene. A towering operatic vocal performance from Daltrey leads to a truly epic climax. Still a highlight of any Who live performance.

Led by Townshend’s instantly recognisable acoustic opening, this definitive mid-60s Who single is driven relentlessly on by Moon’s drumming – which is quite simply syncopation gone mad. Within three taunt minutes, Daltrey delivers those controversial lyrics (‘I look all white but my dad was black’) with the necessary tough guy resolve. Another live favourite, and often used as their set-opener.

First mooted for Townshend’s abandoned, overly complex Lifehouse project, it became the opening track on Who’s Next. The captivating synth and organ-treated intro heralds another galvanising performance. Daltrey’s cries of ‘teenage wasteland’ are a genuine call to arms. As for the title, Baba refers to Meher Baba, Townshend’s spiritual leader, and O’Riley tips the hat to electronic composer Terry Riley – another key influence on Townshend at the time.

Time has done nothing to diminish the sheer rush of adrenaline that pours out of this mod anthem from the off. Daltrey’s hesitant lyrical delivery amid the recognisably Who-like chaos resonates as clearly now as it did back in 1965 when they were hoping they would die before they got old.

Lyrically we’re talking about a revolution here – in fact the line ‘meet the new boss, same as the old boss’ carries fresh overtones in the light of current events. Moon’s crashing re-entry after the synth solo and Daltrey’s microphone-spinning final primal scream are just two reasons why this is the ultimate Who anthem.

Buyer's Guide: The Who

The Who: From Purple Hearts To Power Chords