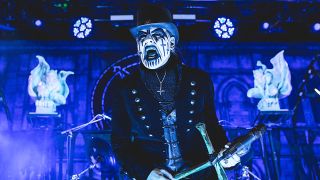 He inspired Metallica, annoyed Gene Simmons and took rock for a walk on the dark side, but King Diamond remains a divisive figure in rock music. Cult hero to some but no more than a clown to others, what’s indisputable is that from in his early days in Mercyful Fate, to his current and eponymous band, he’s made some outstanding music. Here are 10 of his best.

The lead track on Mercyful Fate’s debut EP is wilder and scarier than Venom’s album Black Metal. With brilliant, NWOBHM-inspired riffing and King’s harrowing screams, this is an occult metal classic.

You want riffs? There are 16 of them in this labyrinthine epic from Fate’s first album: a tale of ritual sacrifice, with King’s voice, multi-tracked, a choir of the damned.

In this grinding, Sabbath-referencing track, there’s a warning to amateur devil worshippers: ‘Some people have lost their mind’, the grim message stated gleefully.

A suitably wicked sense of humour was evident in King’s first post-Fate release, a satirical ‘festive’ single of bludgeoning ferocity, in which he played Scrooge in true pantomime villain style.

The dramatic curtain raiser on the first KD album was a blend of old and new: Fate-style blood and thunder enriched by keyboards to create a heavy gothic atmosphere.

The horror-story concept album Abigail is King Diamond’s masterpiece. Black Horsemen is its grand finale and crowning glory; a dark, twisting ride that leads to a chilling and grisly denouement.

The follow-up to Abigail was another spooky concept album, its story based in a house filled with strange spirit voices – Them. In this manic, tumultuous track, insanity and terror reign.

Again a concept album, The Eye was King’s “historically accurate” study of the French Inquisition and the burning of witches – its cruelties and its victims’ agonies, powerfully evoked in Burn.

Mercyful Fate’s comeback album had the heavy vibes and sinister aura of their classic work. And on the bonus track Return Of The Vampire, King’s famous friend Lars Ulrich played drums.

King’s most recent album – conceptual, of course – imagined a journey into the afterlife of two children murdered by their father. The Cellar, inevitably, is where someone, some thing, is waiting…

What does King Diamond get up to on his day off?