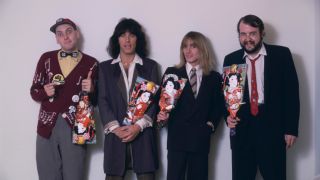 When I was a little kid, I was watching TV past my bedtime and they were playing this movie called Over The Edge. There’s a scene where he goes upstairs and slams the door, puts on his headphones and he’s playing Cheap Trick’s Surrender. And when I heard that, I wanted to be in a band that sounded like that. I was a really little kid, but I completely fell in love then.

I didn’t know who that song was until maybe four or five years later. I was really heavily into punk rock in high school and I was working construction with a bunch of convicts and they had this classic rock station on and Surrender came on again and I was like, ‘Fuck, man! This is what I want to be like!’

They’re always a template for me with their songwriting. And Robin Zander is my favourite vocalist. I just got married and my wife is from Rockford, which is where Cheap Trick’s from. My wife’s mother went to high school with Rick Nielsen and Robin Zander, and apparently my mother-in-law went on a couple of dates with Robin Zander, which is fucking awesome! And my now wife was taking guitar lessons in high school and the guitar teacher quit, so my mother called up Rick Nielsen, because they’re friends, told him the teacher quit and asked if he knew anybody, and he said ‘Just bring her over to the house – I’ll teach her guitar!’ So Rick Nielsen gave my wife a couple of guitar lessons!

10. SCENT OF A WOMAN (Special One, 2003)
To me this is really catchy and anthemic and it almost sounds like Against Me! borrowed from it. It’s killer. It’s kind of a deep cut and it’s great. And it’s kind of nasty – The Scent Of A Woman. I don’t know how Rick Nielsen gets away with it. And I’m one of those guys who’s guilty of loving the golden era of bands, but Cheap Trick got away with some stuff in the ’80s, and kind of came back in the ’90s. They did a Slade cover, When The Lights Are Out, on an album [The Latest] a couple of years ago, and they just fucking killed it.

9. CALIFORNIA MAN (Heaven Tonight, 1978)
This is a classic. It’s a cover of a song by The Move and it got the boogie-woogie and it shows off some of Rick Nielsen’s old school, kind of blues, rockabilly guitar playing. And Robin Zander’s vocals are crushing on that, as usual. It’s killer!

**8. DREAM POLICE (Dream Police, 1979)
**This album came out in ’79 and the cover’s cheesy as shit. They came back with that big chorus and those Pete Townsend chords, but the pre-chorus is just fucking killer. It’s almost got this Queen-ish vibe, like Brian May wrote it, and then Rick Nielsen does the talking part – “They won’t leave me alone.” It’s tough, but it’s also got a bubblegum switchblade flair. And Robin Zander’s vocals are wailing! They’re high as shit. It starts the album and it’s the highlight of that record for me.

**7. COME ON, COME ON (In Color, 1977)
**This is a singalong from hell. Anytime you can get a chorus that has shit like, “Come on, come on” in it is killer. And it’s got that ascending guitar riff with the open strings. This is classic Cheap Trick at its best. I don’t even know how to say it – just great songwriting and a super catchy, power-pop anthem. You can’t fucking beat it!

**6. STIFF COMPETITION (Heaven Tonight, 1978)
**That fucking riff – bow doo now doo dow now now…wah-ah-ah! – I mean, Angus Young could have wrote that riff. It’s tough as fuck. It’s ripping, man, and Robin comes up with this ripping vocal line. But the appeal to me is they can be tough and rock’n’roll, and then go into these kind of snotty, massive pop choruses. And to me, that’s the template for Biters. I love hard rock riffs and I love that kind of punky, big, anthemic chorus stuff. They’re one of the few bands that have married the two. A lot of bands will just stay very hard, or a lot of bands will just stay very poppy. When I was writing Restless Hearts, I wanted that tough kind of verse and I wanted that big, fat, bubblegum pop chorus.

5. HE’S A WHORE (Cheap Trick, 1977)
This is from their debut record and it was right when punk was happening, so the production isn’t as big on it. When I started Biters, this was the first we ever covered. Jut the riff, and the vibe – he’s talking about being a male prostitute, a gigolo, and he’s talking about bitches teeth being green and stuff. Rick Nielsen, or whoever wrote those lyrics, must have been out of his mind, because they’re just freaky, but man, it’s right up there with any of the classic ’70s punk albums to me. And it’s got a vibe from hell. Big Black covered this song, too.

**4. IF YOU WANT MY LOVE (One On One, 1982)
**I’m a sucker for ballads, and this ballad is massive. They start with the chorus – and you know you’ve got balls when you start with the chorus right out – and then the verse-bridge thing is this weird Beatles, minor E, crazy thing. I don’t even know how it works or how they developed that vocal melody over the top of those verses, but it’s fucking killer, and this was when Robin was really showcasing his voice. The chorus sounds like it could have been a Slade chorus to be honest – it’s that arena, to me. I love it.

**3. SOUTHERN GIRLS (In Color, 1977)
**This has got a different groove to the other songs. The chords are really big and open and it kind of just flows. We covered this on New Year’s two years ago. And of course I’m from the South and I love that it’s about Southern girls. It’s got a low bass piano in it that kills and, again, it’s one of Robin’s best vocal moments. It’s super simple, but it shows you how smart they are as songwriters. They do a couple chords, a couple moves, and it keeps you captivated, and to me, that’s what it’s all about.

**2. REACH OUT (Heavy Metal OST, 1981)
**This one was off the Heavy Metal soundtrack and it was produced by Roy Thomas Baker, who did the first Cars record, and he put the synths all over this song and goddamn it rips! It just crushes. It’s one of my templates for how I like to feel when I listen to music. A lot of modern music today, I don’t feel the emotion and I can’t relate, but a song like this makes me feel really good.

**1. SURRENDER (Heaven Tonight, 1978)
**I know that it’s very contrived, but this is the song that made me want to start a band and which has really influenced me. It’s probably their biggest hit, but it captures teenage angst and teenage rebellion, and it’s snotty. The line about the parents having the KISS records out, that’s just fucking genius. I know I should probably pick something cooler that’s not their biggest hit, but I don’t really care. This will probably be my favourite song until the day I die. I have a big problem with trying to write this generation’s Surrender – I get mad at myself because I want to recapture it and I try and fucking try. Let’s hope on the next record I can do it!