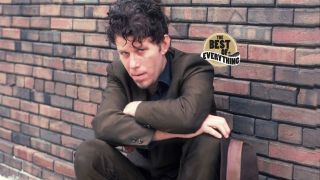 I feel like maybe lots of people have heard of Tom Waits and would like to check him out. Maybe they’re just overwhelmed by the sheer volume of his work and the changes in his material so they don’t know where to start. Hopefully this might be a little road map for someone looking for a way in.

I first heard Tom Waits when I was about 16 or 17. I’d just got into punk rock and one of my friends, Graham, brought me two records – Greetings from Ashbury Park and Rain Dogs – and said ‘You should check out these records, because what you’re doing with the punk thing is cool, but really your songs sound like this.’ I’d known Bruce Springsteen from my mom listening to him, but when I heard Tom Waits I thought, ‘Ah, okay, cool, so Tom Waits is like after hours Bruce Springsteen. When all the people in Bruce’s songs go to sleep, this is what happens, this is where the narrative continues.’

I liked the fact that Tom Waits songs had elements of folk and singer/songwriter influences but were quirky and non-mainstream, which was exactly what I wanted to hear at the time. After that Graham gave me The Heart of Saturday Night and Closing Time and they drew me deeper in, but then one day he played me The Black Rider and I was like ‘No, hold on, this is too much, I need to get used to this’, it was too weird for me, and I probably didn’t really get it until I was in my 30s. But listening to those albums when I was very young was really helpful, because Tom Waits made me feel like I didn’t have to be the most perfect singer in the world to make a record, that you could almost use your voice as another instrument, which was something that I took to the fullest extent that I could on the Horrible Crowes record [Elsie].

The only person that I know who in any way knows Tom personally is the photographer Danny Clinch, but all of my friends are convinced that I’m going to turn into a Tom Waits-style character, that by the time I’m 40 I’m going to be this weirdo who bangs on drums and sings songs about crazy people… and I take that as a compliment! There’s a running joke among my friends where every time it’s my birthday they’ll hold up a photo of Tom Waits and go ‘In five years, this is you… In four years time, this is you…’ I don’t know Tom at all, but I have this impression that perhaps he views being a musician in the same way that I do, where it’s something that you do from 9pm to 11pm on a show day, but that at every other time you’re just a guy, just an ordinary guy who washes dishes and takes out the garbage like everyone else. He seems like he doesn’t take all this too seriously and that he has fun, that he still has this child-like sense of wonder about the world, and I think that’s something that everyone should try to retain.

DOWNTOWN TRAIN (Rain Dogs, 1985)
When I was 17 I went through this break-up with this girl that I was convinced I was going to marry – so stupid, the hopeless romantic! – who ran off with this guy from another band and just crushed me. I had just got Rain Dogs and as soon as I heard the intro to Downtown Train I just knew it was going to be my favourite song. It’s this rough and tumble, beautiful, romantic love song, with this amazing clumsy poetry that I totally understood. At the time I felt like a misfit – I didn’t fit in with the cool kids, but I didn’t fit in with the punks because I wasn’t punk enough, so I was in this weird middle – but when I heard Tom Waits sing ‘But I’m shining like a new dime’ I kinda understood that here was this misfit who looked a bit funny who had invented this imaginary world where he was something special, where he had this swaggering confidence, but kinda knew that it was all a joke. I think that’s been my M.O. since I heard this song, like I could pretend to be this cool, suave guy even if I felt like the complete opposite.

ANYWHERE I LAY MY HEAD (Rain Dogs, 1985)
This is the last song on Rain Dogs and when I heard it it kinda blew my mind. The chord progression is one that comes from hymn music, from gospel church music, but then he’s just screaming over the top of this beautiful music. I kinda thought, ‘This is the stuff you want to say at 4am to your girl when things didn’t work out’, not the ‘John Cusack standing outside her window playing Peter Gabriel’ thing from Say Anything [In Your Eyes], but blaring trumpets and “My heart is in my shoes.” It’s so beautiful.

RUBY’S ARMS (Heartattack and Vine, 1980)
This isn’t one of Tom Waits’ best-known songs, but it’s from Heartattack and Vine and I remember hearing it for the first time and just bawling crying listening to it in my car. It’s one of the heaviest song I’ve ever heard, in terms of emotion.

**HOLD ON (Mule Variations, 1999)
** The Mule Variations record is amazing, and was a huge influence on me. When I first heard Hold On I thought, ‘This is everything I’ve been trying to do my entire life.’ I think there’s a maturity that you need in order to do this kind of music, but I thought ‘When I’m old enough, when I’m maybe 50, this is what I want to sound like, this is the weight I want my music to have.’ I borrowed lines for this for [The Gaslight Anthem’s] Film Noir, that line about ‘Monroe hips’ is giving a nod to Tom Waits. What a great song.

DOWN THERE BY TRAIN (Orphans: Brawlers, Bawlers & Bastards, 2006)
It has that old religious thing that lots of people who grew up with a religious background bring into their music…I do it, Bruce [Springsteen] does it, everybody does it… where you have this conflict in your songs like ‘Am I living in this world right?’ where you half feel like a saint and half feel like a sinner, and you’re not really sure what you’re doing. This is a beautiful song; there’s a line like ‘Even the soldier who pierced the heart of the Lord can be forgiven, down there by the train’, and that’s a beautiful thing to think of when you struggle with that kind of mentality.

NEVER LET GO (Orphans: Brawlers, Bawlers & Bastards, 2006)
This is one of the most beautiful love songs ever written. There’s a lyric that goes ‘You can send me to Hell, but I’ll never let go of your hand’, which is just so wonderful. He’s just thumping on the piano, screaming out these incredible lyrics, and it’s just so powerful and beautiful and passionate.

LONG WAY HOME (Orphans: Brawlers, Bawlers & Bastards, 2006)
I always felt that this song spoke to my life, because as a musician you have this juxtaposition where you love being on the road and playing shows and taking your music to people but at the same time you want to be at home with your family and the people you love. There’s a line where he says ‘I love you pretty baby, but I always take the long home’, which is just perfect. I once had a hat made for me by a wonderful hat-maker called Cat Havstad who lives in Oregon and works as Havstad Hats and inside the brim of all her hats she’ll write a quote if you like. When she asked me if I wanted one I instantly thought of the line ‘I got a head full of lightning, and a hat full of rain’ from this song, which I just think is so cool, and which totally speaks to that ragamuffin, Jack Kerouac part of me.

I DON’T WANNA GROW UP (Bone Machine, 1992)
As with The Black Rider, it took me a long time to get into the Bone Machine album, until I heard this song, which the Ramones later covered. When I heard this I felt like ‘Yeah, this is my mission statement: I just want to do my thing, growing up sucks!’ Going back to Springsteen, there’s often an element in his songs where characters are kinda regretting how life has turned out, and I think a lot of people have that feeling like growing up is only ever going to take the fun out of life.

DIRT IN THE GROUND (Bone Machine, 1992)
This is another amazing song from Bone Machine, and it’s just so chilling. It’s got an amazing melody and again, it sounds like a hymn, but it’s my kind of hymn, where it sounds broken and wrong and dark and crooked, it’s the real type of religion, for people who’re not sure that they’re doing it right. This song is basically saying ‘It doesn’t matter what you do in this life, or what you have, because guess what, you’re all going to be dirt in the ground.’ I always thought that was a sad, weirdly beautiful thing to say.

WHO ARE YOU (Bone Machine, 1992)
This is from Bone Machine too, and there’s one line that sold the song to me, where he sings ‘Are you still jumping out of windows in expensive clothes?’ Again, it’s that juxtaposition, the misfit meets the Casanova, where he’s wanting to be cool and have nice things, but at the same time he kinda knows that this isn’t the world for him.

CHRISTMAS CARD FROM A HOOKER IN MINNEAPOLIS (Blue Valentine, 1978)
I got the Blue Valentine album, and I’m not usually a jazz guy, but right in the middle of the record there’s a song called Christmas Card from a Hooker in Minneapolis which just floored me. It sounds like a letter from an ex-girlfriend who’s telling you that she’s doing well, but then at the end she’s confessing ‘I’m a mess.’ The lady is telling her story, like, ‘Charlie, I got a husband and he plays trombone and he bought a used car lot so I’m going to drive a new car every day of the week’ but then at the end of it she’s like ‘Actually Charlie, I’m in jail, and I need some money’. That just shows his sense of humour. One thing Bruce said to me one time was ‘I like the fact that you don’t take yourself too seriously with the songs, you know how to balance the line between the serious, and the desperate, and the jokes, that’s the key’. I was like ‘Cool, man, thanks!’ and I think that’s something that Tom Waits does in his songs too.

Brian Fallon’s new album Painkillers will be released on March 11 through Island. He was speaking to Paul Brannigan.