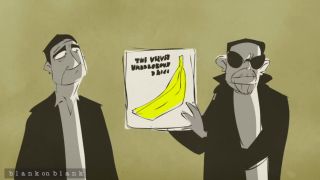 Lou Reed branded The Doors “stupid” and The Beatles “garbage” in a lost interview released after 28 years.

The late Velvet Underground frontman’s interview with journalist Joe Smith was recorded in 1987 but has only surfaced now in an animated video created by Blank On Blank.

In it, Reed insists the Underground never intended to make money out of their music and says he was amazed by the negative reaction to their 1967 album The Velvet Underground & Nico.

He says: “There wasn’t any recognition. What there was, was a lot of bad press. I got a little puzzled at how savage the reaction against us was. ‘Savage and decadent, look at what these song are about. Venus In Furs is about all of this.’ They didn’t even know that Venus In Furs is a book. I didn’t write it, I just said I’d be interested to take this book and put it in a song.

“The other thing that killed me was that stuff like this had been in books for so long. I wrote a song called Heroin and you would have thought that I’d murdered the pope. What I wanted to do was write rock ‘n’ roll that you could listen to as you got older and it wouldn’t lose anything, it would be timeless.

“We didn’t expect to sell records, that’s not what we were doing. We had ambition and a goal. To elevate the rock ‘n’ roll song and take it where it hadn’t been taken before.”

Asked how he thought his music stacked up against rival bands of the time, Reed pulls no punches.

He says: “I know this sounds pretentious, but the other stuff couldn’t even come up to our ankles. The level that we were on compared to everyone else, I mean they were just painfully stupid and pretentious. What I mean by stupid, I mean like The Doors.

“I never liked The Beatles, I thought they were garbage. I liked nobody.”

Lou Reed died in 2013 after a series of health setbacks following a liver transplant. His former bandmate John Cale paid tribute to Reed by reworking his track If You Were Still Around.