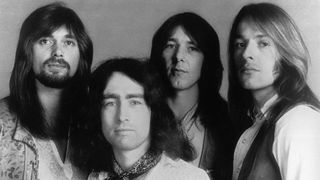 More than just a supergroup, Bad Company are one of the great British bands. They took the blues rock template of Free and gave it an arena rock attitude. In the process, the band recorded some of the most memorable and inspired songs of the 70s. These are their 10 most acclaimed tracks.

For the most part, the original line-up’s final album, Rough Diamonds, was underwhelming. But this track is a genuine sparkler. It has that lazy, easy action style the band had made their own. Rodgers’ smoothly pirouetting vocals butt nicely up against Mick Ralphs’ sedate guitar motif. A last hurrah from the Bad boys.

From the Desolation Angels album, this has a distinct funk twang, as Rodgers stretches out a little on a song that’s a celebration of the band’s live audience. Ralphs delivers a curt, sharp solo, while Simon Kirke on drums and bassist Boz Burrell provide a clipped rhythmic accompaniment. As close as the band ever get to being flashy.

The title track of the band’s fourth album, this has an ominous, almost dark atmosphere. It combines a tale of wild passion with an account of a fugitive on the run. The combination works well, as Rodgers tells the story with a fiery yet distant vocal, while the musicianship is effectively heavy.

From the band’s debut album, this has the atmosphere of someone trying to convince his lover that things are changing for the better. It’s all done with that sense of simplicity and acuity for which Bad Company became renowned. Despite being seen as a supergroup, songs like this prove they had a natural chemistry.

From the album of the same title, Run With The Pack opens up with a bar room piano piece before the rest of the band crash in to great effect. There’s a strolling boogie rhythm to the first half of the song, but it gives way to a more majestic arrangement, with a swelling string section. It has panache and subtlety in spades.

From the Straight Shooter album, Ralphs and Kirke dish out a high-stepping rhythm, as Rodgers croons about the confusion wrought by a relationship with an unpredictable woman. It alternates lengthy passages with a searing pace, with the occasional, effective drop in tempo. A powerful statement of good time intent from the four.

Again from Straight Shooter, this is an epic tale of the rise and fall of a rock star. It’s told in a matter-of-fact manner that brings home the tragedy of his demise. Said to be inspired by the deaths of Janis Joplin, Jimi Hendrix and Jim Morrison, it now also seems to predict the sad loss of former Free guitarist Paul Kossoff in 1976.

Yet another classic from Straight Shooter, this was a big hit on both sides of the Atlantic. It has an unmistakable guitar opening, and builds from a strolling introduction, opening out into a more strident chorus. It’s Ralphs’ stunning guitar pattern that provides the solid foundations for the track, elevating it to iconic status.

One of the most recognised songs not just of Bad Company’s career, but of the era it came from. As soon as the opening guitar chord is struck you know exactly what’s in store. No wonder it was the band’s biggest hit single, because it combines a shuffling riff with a classy melody, all done with a big production that still sounds intimate.

The eponymous anthem from the band’s first album, this epitomises everything that made the band essential and influential. From the dusty atmosphere to Rodgers’ almost enigmatic vocals and Ralphs’ haunting guitar chime, this is a momentous song. An epic that took a blues rock template, and used it as a springboard for something that resonates down the decades. This is the best proof you’ll find of Bad Company’s timeless impact.