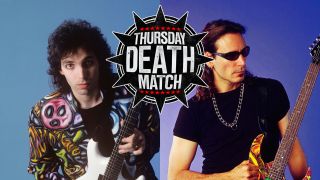 In the red corner, virtuoso guitarist extraordinaire Joe Satriani. In the blue corner, virtuoso guitarist extraordinaire Steve Vai. They’ve learned together, they’ve toured together, and they redefined what’s possible to extract from six strings and an overdriven amp. But which player’s better? Polly Glass straps on her own instrument and starts shredding for Satriani…

There’s a myth that shred is only for bookish guitar nerds. Or testosterone-charged bulldozers with an unartistic need for speed. But this simply isn’t true. Yes, ‘techy’ guitar can be bore-ish, unimaginative and downright painful. No, most rock listeners don’t want mindless twiddles through the augmented dorian mode or the Byzantine minor pentatonic or what-have-you. But in the right hands, the dizzying heights of super-technical playing can be employed to magical effect.

No one proves this more effectively than Joe Satriani. Rooted in Albert King blues, which he then swerves thrillingly through outer space – having grown up on Black Sabbath and Jimi Hendrix – Satriani is an exciting, easily loveable tour de force of axe histrionics. As revered by people like Brian May as Yngwie Malmsteen, he is the guitar in man form.

Steve Vai is a sensational player. I’m not about to deny this for a second. With a vibrant catalogue of Eastern influences and devilishly difficult, inventive performances, he deserves his place in guitar hero world – as his psychedelic quest for cosmic noodler utopia goes on. But where did he learn his first chops? From his high school pal Satriani. Impressed by Satch’s teenage playing at school dances and showcases, the younger Vai called on him.

Kirk Hammett also became a Satch student, ditto Larry LaLonde from Primus, Rick Hunolt from Exodus, Alex Skolnick from Testament… Vai might have gone on to achieve greatness, but without his lessons from Satriani those fearless, scale-buggering licks may never have seen the light of day. And in their own ways, all his students (and let’s not forget what an interesting, varied bunch they were) owe him a nod of their immense reputations.

More important, of course, is the simple pleasure of Satriani’s music. Yes some of his weirder moments have had mixed reception (electronic experiment Engines Of Creation, for example) but at his best his appeal is genuinely wide-reaching. Not confined to purist fretboard fanatics. The Extremist had the popular Summer Song plus lesser played beauties like Motorcycle Driver and New Blues. His more recent run of back-to-basics works has been peppered with killers; Pyrrhic Victoria, A Door Into Summer, Come On Baby, San Francisco Blue… Naturally fans will differ over favourites, and yes he’s had some debatable moments (was Borg Sex a good idea?? You decide). But nevertheless, his output has been considerable, inspiring and engaging since the 80s.

And of course Surfing With The Alien is still one of the most joyous examples of guitar wizardry since records began. Its title track and Satch Boogie especially are still the tracks budding guitarists want to learn. It’s fun, it’s theatrical, it spans blues, metal, mystical and rock’n’roll touches…it’s fucking cool. In a very unapologetically comic booky way, with its Silver Surfer theme.

Yes, Vai looks stylish. Yes he shimmies around stages like a well-dressed dragonfly after a long yoga retreat. Satriani, by contrast, is a black-clad bald dude in shades. And he looks a bit like an alien. But while Vai occupies a more holier-than-thou plane of existence, Satriani’s is an altogether more welcoming, groovy show – mixing enigmatic mystique with friendly rock’n’roll fun.

You admire Vai, you enjoy Satriani. For that, he has to be the winner.

‘David? What we doing now?’

The guitar. It was… talking. Not the way Gilmour or Knopfler’s guitars would, through their players’ beautiful musical phrasing. No, Steve Vai’s wah-wah axe was actually saying words.

It gave a ‘Whoa!’ as it and David Lee Roth clocked the foxy Yankee Rose on the sidewalk. (In mid-80s Wales where the teenage me was soaking this up, we called it a pavement.) Then an inhuman wolf whistle, a salacious laugh. ’She looks wild’, growled Roth. ‘Wild’, his six-string bud concurred. Wherever this was leading, I was in.

I must’ve rewound and replayed those first 30-odd seconds of Eat ‘Em And Smile until my hooky C60 copy snapped. But it was the solo on Ladies Nite In Buffalo (still up there with Brian May’s on Killer Queen for me) that turned Steve Vai into my childhood hero, idol even. On further investigation the guitar didn’t just come to electrifying life in his hands, he also looked the business: big hair to kill for (that was long ago and even human sacrifice wouldn’t help me now); cheekbones you could slice sushi with and hands Paganini would’ve torched his Strad for.

He had interesting musical form too - with Alcatrazz, on PiL’s Rise, as Zappa’s ‘stunt guitarist’ who inspired the loud ‘n’ lewd Stevie’s Spanking. Then there was Flex-Able, his off-the-wall, home-made solo album filled with whacky humour and containing The Attitude Song, an extraordinary compact and replete piece of guitar music, still. He was clearly a master musician – hell, he could even read ‘the dots’ – and he came across as very zen in interviews. Every guitar mag wanted to speak to the guy who’d stepped into Eddie Van Halen’s hi-tops at Roth’s side, and he would happily name-check his old friend, guitar teacher and mentor, Joe Satriani.

This shone invaluable light on Satch’s steady career, notably his breakthrough album Surfing With The Alien. Later, I’d come to appreciate this for the stunning, eclectic work it is; at the time though, somehow it left me a little cold. It didn’t have the rock ‘n’ roll pizzazz of Vai’s stuff. Then how could you compete with a guy smashing out Just Like Paradise on a heart-shaped double-neck geetar?

Or the guy literally playing the Devil’s Advocate and duellin’ axes with The Karate Kid?

The doozy was 1990’s Passion And Warfare - that rarest of things, an instrumental UK Top Ten record, complete with the quintessential Vai track For The Love Of God, and the Montgomery/Hendrix-esque beauty, Sisters.

All this and his Ibanez Jem guitar was just the coolest axe I’d ever seen. It even had its own handle, CARVED INTO THE BODY! He talked of constructing artificial scales, of bringing off his own pet cat with a thermometer to get an orgasmic sound effect on The Riddle. To the adolescent guitar nerd, these things were very, very important.

Also an Ibanez guy, Satch would grow constantly into his otherworldly persona; losing his hair and going the full egg only added to his alien aesthetic. It’s actually heartening how entwined these old friends’ careers became. Along with the likes of Eddie VH and The Edge, they became two of the most broadly influential players of their generation, cited by everyone from Dimebag Darrell to, well, every wannabe widdler since. Seeing the two on their numerous G3 tours, you couldn’t really put a Rizla between them for charisma, skill and entertainment value, and both have continued to display their capabilities on a raft of albums since.

It’s always struck me that, his fun stint with Chickenfoot aside, Joe seems most comfortable flying solo, releasing a high-calibre record every two years or so. His new one, Shockwave Supernova, is typical of his later work – nothing ground-breaking work, but still an hour-long window into the enthralling soundworld of perhaps the most easy-going, centred and eloquent axe god you could hope to meet.

Vai’s last album, 2012’s The Story Of Light was characteristically experimental, but not really his best. Yet he’s proved himself to be the stronger collaborator of the two, and his career’s been more varied for it. His gun-for-hire work was the best thing on Whitesnake’s otherwise ball-shrivellingly bad Slip Of The Tongue album, and Holland’s Metropole Orchestra made a good fist of interpreting his own (Zappa-lite) classical pieces.

Sadly, the one time I interviewed him he was slightly abrupt, focused on flogging his new DVD, and was just a little bit more starry than I’d expected. But then in the 25 years since his guitar first talked to me he’d been a giant in my mind, one to be revered, rewound, replayed. And what actual human could contend with that?

Disregard the common maxim about meeting your heroes – you should always do so if lucky enough to be given the chance. Even if they disappoint you, your teenage self will be glad you did. Mine is.

LAST WEEK: WHICH IS BETTER? HIGHWAY TO HELL OR BACK IN BLACK?