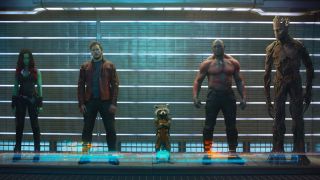 The main ‘thing’ that everyone wants is metal

There’s this weird orb thing that basically everyone in the film wants to get their hands on, either for money or because they want to take over the world with it (obviously). Well, it’s metal. The whole point of this movie is metal. Think that’s a good one to start with.

The main character has a Walkman

The film is set in space but our main hero carries around an old Sony Walkman with an ‘80s mixtape inside. The songs aren’t really that metal, but we bet you listened to a Walkman back in the day. Unless of course you’re too young to remember what one is – IT’S LIKE A BIG SOLID MP3, YEAH?

He also has a cool metal mask

Quill, his name is – that’s the main character. And he’s got this cool mask. Not only is it made out of metal, it’s also a mask. You know who wear masks? Slipknot! Hey, loads of people wear masks – surely one of Mushroomhead has a metal mask, too? Not sure why though, we can’t imagine how sweaty it’d get in there…

There is a WWE wrestler in it

It’s Dave Bautista, or Batista. Saliva did his WWE entrance music, which is unfortunately not played at all during the film. Still, you could bring it with you on your Sony Walkman and play it whenever he comes on screen, you know, to get the full experience. Up to you.

There is a giant tree in it

This is about as WOOD as it gets, but there’s a scene where he (Groot) turns a crowd of henchmen into what looks like the most insane mosh pit you’ll ever see. They all die, so it’s probably not one you’d want to get involved in, but still…

The giant tree is voiced by Vin Diesel

Vin Diesel’s voice is so low he could have given Peter Steele a run for his money. He should be in a death metal band. Unfortunately, he’s content with singing stuff like this:

His name is even Ronan The Accuser – if he’s not the frontman for some sort of intergalactic black metal band then we don’t know who is.

That’s the director by the way. Before he hit the big time he used to work at Troma, which is about the most metal movie studio on the planet – think gore, sex, anarchy and enough bad taste to kill a thousand Smints. Troma president Lloyd Kaufmann even pops up in a cameo as a prisoner.

It is FUCKING brilliant

The end credits sequence is sending people insane the world over

There’s a special cameo revealed in the post-credit scene that we won’t ruin here (you can easily find it if you search elsewhere), but it’s making people go mental. That’s only one letter away…

Guardians Of The Galaxy is out now. Seriously, go see it, it’s amazing.