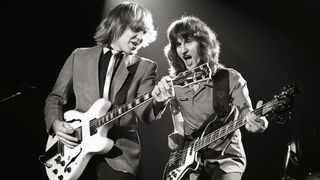 Within Rush’s 37-year recording career there are a number of landmark songs: Working Man was their first track to get key radio airplay outside of their native Canada, and led to a worldwide deal with Mercury Records; 2112 secured the band’s future when that Mercury contract hung in the balance; The Spirit Of Radio gave them the unlikely distinction of a UK Top 20 hit. But of all the songs in the Rush catalogue, the most famous is Tom Sawyer, the opening track from 1981’s Moving Pictures, the band’s greatest and biggest-selling album.

“Tom Sawyer is a real trademark song for us,” says Rush guitarist Alex Lifeson. “Musically it’s very powerful, and lyrically it has a spirit that resonates with a lot of people. It’s kind of an anthem.”

Rush had arrived at a crossroads when they came to write Tom Sawyer. In the 70s they had become the undisputed masters of progressive hard rock, famed for their epic conceptual pieces that played out over entire sides of vinyl. But with their first album of the 1980s – Permanent Waves – came a significant change.

“We began writing in a tighter, more economical form,” says Lifeson. The result was that hit single, The Spirit Of Radio: a virtuoso-rock tour de force compacted into less than five minutes. And the song’s lyrics fit neatly with this more direct approach. Bookish drummer Neil Peart, the author of all Rush lyrics since 1975, had previously found inspiration in ancient mythology and science fiction, but for Permanent Waves his writing was simpler, his subject matter more worldly.

Tom Sawyer was the crystallisation of this new, modern Rush: a powerful, finely crafted hard rock song with a punchy yet deeply philosophical message. But it was also a song for which Rush were indebted not only to a giant of American literature, Mark Twain, but also to a rather peculiar Canadian named Pye Dubois.

A poet and lyricist, Dubois worked with the band Max Webster, who were based in Sarnia, Ontario, in the same province as Rush’s hometown of Toronto. The two bands were close, recording a song together, Battle Scar, that featured on Max Webster’s 1980 album Universal Juveniles. “Those guys were big friends of ours,” Lifeson recalls. “But Pye was a little mysterious – kind of a strange fellow! He was very quirky, a bit of a nut, but he did write great lyrics. And around 1980 he sent a poem to Neil with an idea to collaborate on a song. The original draft was called Louie The Warrior.”

The poem was based on Twain’s 1876 novel The Adventures Of Tom Sawyer, which all three members of Rush had studied in school. Peart in particular identified with the book’s central themes of rebellion and independence. From 2112 through to Freewill on Permanent Waves, individuality was a recurring subject in Peart’s lyrics. What Dubois created in Louie The Warrior was, in Peart’s words, “a portrait of a modern-day rebel”. Says Lifeson: “Neil took that idea and massaged it, took out some of Pye’s lines and added his thing to it.” Peart chose the simpler title of Tom Sawyer and completed the lyrics with an element of autobiography. As he put it, “Reconciling the boy and man in myself.”

The music for Tom Sawyer was also a departure for Rush. “Structurally, the way the song develops is very interesting, going from that first verse into a bridge into a chorus and into the solo and then repeating,” says Lifeson. “It wasn’t a typical kind of structure for us at the time.” Likewise, the music was written in an unorthodox fashion – for Rush, at least.

“Moving Pictures was different for us in that it was more of a jam sort of thing,” Lifeson explains. “A lot of the material for that record was written off the floor. That was certainly the case with Tom Sawyer. We were rehearsing in a little farm outside of Toronto. Half the barn was a garage and half was a small rehearsal space. We would typically just go in and jam and develop songs that way.”

It was high summer when Rush wrote the songs for Moving Pictures. But by the time they began recording the album at Le Studio in Morin Heights, Quebec – the mountain retreat where the band had cut Permanent Waves – a mean Canadian winter had set in.

“It was the coldest I’ve ever been in my life, that’s for sure,” Lifeson laughs. “We were living in a house beside a lake, and the studio was on the other end of the lake. If we were brave enough, we walked through the woods. It was really beautiful, but it was minus 40 out there! I’m serious!” The promotional video for Tom Sawyer, shot at Le Studio, begins with a view of this snowbound landscape and ends with a pan out across the frozen lake.

“On Tom Sawyer, the synthesiser is such a key part of that song,” says Lifeson of the recording. “There was a good integration between the three of us and the keyboards. We still had that trio feel. Plus, we always felt that we had to replicate each song as faithfully as possible when we played it live, so Tom Sawyer was written in that way. There’s no rhythm guitar under the guitar solo or anything like that.”

It’s a song that proved pivotal to the band’s development. Geddy Lee has called it the “defining piece of music” from Rush in the early 80s. For much of that decade, keyboards took an increasingly important role in the band’s sound. More than three decades on, the power of this song, and its message, has not diminished. “There’s a freshness about that sound that still stands out,” Lifeson says proudly. “And there’s something in the lyric that people have always related to very strongly – the spirit of independence and adventure. It’s just one of those special songs.”

In recent years, a wave of unlikely Rush fans have emerged from the woodwork, not least South Park co-creator Matt Stone. Belying his serious reputation, Neil Peart asked Stone to create a cartoon skit of the South Park kids performing Tom Sawyer, in which the cartoon characters are billed as Lil’ Rush. Their performance quickly unravels when singer Eric Cartman fluffs his lines and rival Kyle Broflovski exclaims: “Those aren’t the right lyrics, fat-ass!” Cartman snapped back: “I am Geddy Lee, and I will sing whatever lyrics I want!”

The skit was screened at Rush gigs before the real band played Tom Sawyer. “Matt did such a great job with it,” says Lifeson. “We all had a great laugh. And the fans loved it!”

The History Of Rush by Geddy Lee & Alex Lifeson: The Early Years