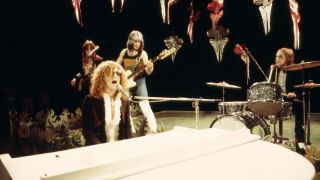 Fate always seemed to deal Mott The Hoople a peculiar hand. Four years’ toil on the Island label had brought them a reputation as one of Britain’s must-see live bands, yet no one seemed to be buying the records. By 1972 they were resigned to sharing stages with circus jugglers and comedian Max Wall. Utterly dispirited, they’d all but split. Then David Bowie offered them one of his own new songs, All The Young Dudes, and Mott The Hoople were reborn as swaggering rock’n’roll hit-makers. By the following year they’d become regulars in the British charts and were playing to packed crowds both here and in the US.

Lead singer Ian Hunter, the quintessential early-70s frontman in outsize shades and a cascading frizz of big hair, had emerged as their primary songwriter. The major success of singles Honaloochie Boogie and All The Way From Memphis, both from Top 10 album Mott, suggested the band’s rollicking glam’n’roll was finally here to stay. And when Hunter came up with another big smash later in ’73, Roll Away The Stone, it seemed like the good times might never end.

Peaking at No.8 in November ’73, Roll Away The Stone was the crowning glory of Mott The Hoople’s commercial era. It even sounded like a celebration. With honking sax, a squealing guitar and ‘shoop-shoop’ backing vocals from all-girl trio Thunderthighs, the song transposed the euphoric flash of 50s rock’n’roll onto the hard-bitten 70s.

“The song was originally written for the Mott album,” recalls Hunter. “The piano I had was an upright that cost me 30 bob, and I’d slammed all the white keys out. So I made myself learn how to play the black ones, which was great because I didn’t understand what I was doing. I knew where I was going with the white ones, but it’s better firing away somewhere you don’t know. I wrote All The Way From Memphis, Roll Away The Stone and something else all in sharps and flats.”

Roll Away The Stone’s main riff bore a passing resemblance to The Beatles’ While My Guitar Gently Weeps. But, as Mott’s then-guitarist Mick Ralphs offers: “Any similarity to anything else was purely accidental. I just played the song as I felt it. Like anything I’ve recorded or played on, I just got into the feel and mood of the song. I never plan or work anything out, although I did have to come up with the guitar hook in the intro, as I did with All The Young Dudes. Ian had started to write in a certain commercial way, and we both thought that a good guitar hook was important for Roll Away The Stone.”

The band nearly had the song swiped from under their noses. “We went to the States,” says Hunter. “And somehow The Hollies tried to get it. The guitar player from The Hollies – that kid who looked young his entire life [Tony Hicks] – had gone into the publishing company and said they wanted Roll Away The Stone. ‘But that’s a Mott The Hoople song. You can’t do that.’ So he said: ‘Oh yeah, they’ve given us permission.’ This is the story I got.” The song stayed with its writer, but then fate took another strange turn. With the song in the bag, Hunter appeared to jinx himself. “I made a fatal error,” he winces. “Tony Brainsby was our publicist at the time and I remember walking into his office and saying: ‘I’ve got the formula. I’ve cracked it.’ And that was the minute I stopped having the formula.”

The Golden Age Of Rock’n’Roll would dent the Top 20 in ’74, but Roll Away The Stone was effectively the band’s last major hit.

Another factor in their decline, says Hunter, was the departure of Ralphs, who quit to form Bad Company in August 1973. Roll Away The Stone was one of his final contributions to the band. “By that time I’d decided to do something with Paul Rodgers,” Ralphs explains. “Something more bluesy and basic. Don’t get me wrong, I loved Mott. But after the success we became a pop band. Which was great in terms of acceptance and popularity, but I felt we’d lost some of our wildness and simplicity. It was tough to leave my dear friends, but I had to move on. It was during the recording of the Mott album when I told the band I wanted to do something else, although I did finish the album, and did a US tour, before leaving.”

Ralphs’ replacement was ex-Spooky Tooth guitarist Luther Grosvenor, aka Ariel Bender. More flamboyant than his predecessor, Grosvenor added a dash of showmanship to Mott The Hoople that chimed with the vaudevillian madness of glam rock. He ended up playing on the album version of Roll Away The Stone that appeared on The Hoople. Lynsey de Paul, incidentally, did the spoken bridge part.

Mott The Hoople had ended 1973 on a roar, climaxing a 22-date tour of the UK, supported by Queen, with two shows at Hammersmith Odeon. The second sparked a near riot when the venue’s management brought the safety curtain down on the band during the final encore. But with Ralphs gone, Hunter was starting to feel the strain. Bowie’s former guitar hero Mick Ronson was brought in to replace Grosvenor later in ’74, but Mott The Hoople were essentially over.

“I seemed to have a handle on what Mott was, but nobody else was coming up with anything,” Hunter explains. “So it was stressful and it got worse. Then when Mick Ronson joined, something went haywire there, which added to the distress. It’s well documented that I ended up not being very well during that time [Hunter was diagnosed with mental and physical exhaustion]. Six years is a long time flat out, most of it failure, then a little bit of success. It’d probably run its course by that time anyway. But when you’re young you don’t know that.”