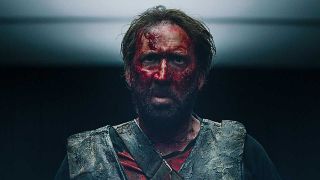 With the sad passing of the great polymath Sir Christopher Lee in 2015, it was inevitable that there would be some debate over who would succeed him as the actor deemed most metal. The suave and worthy candidate Michael Fassbender has spoken of loving Sepultura and Slayer in his youth, while Jim Carrey’s fascination with grindcore and death metal led to him famously hiring Cannibal Corpse to appear in Ace Ventura: Pet Detective. Then there’s Jack Black, who proudly proclaims his devotion to rock across various projects, albeit with a large dose of tomfoolery thrown in for good measure.

But when it comes to an actor who not only loves the genre, but deploys that extreme intensity and nakedly bares his soul on-screen, few could be more deserving of the title than Nicolas Cage.Want proof? Look no further than his recent batshit crazy horror epic Mandy. In a near-40-year career that has seen him take on wild roles that have been acclaimed and lampooned in equal measure for their ostentatious delivery – coining the phrase ‘going full Cage’ – his role as Red Miller might just be his wildest yet. Starring as a desperate and broken man out for bloody vengeance after the horrific murder of his girlfriend, Mandy sees Cage going, well, full Cage.

Speaking exclusively to Hammer from Vienna, the actor famous for his roles as a maniacal terrorist in Face/Off, the Kauffman brothers in Adaptation, a deranged hypochondriac would-be vampire in Vampire’s Kiss, and his Oscar-winning turn as an alcoholic in Leaving Las Vegas, is thrilled to discuss his pride at his latest performance that has been as rapturously received as the visual delivery of acclaimed director Panos Cosmatos. Measured and friendly but with an eccentricity running through his discursive answers, you forget you’re talking to a thespian, such are the similarities to explanations given by musicians of their art and delivery.

In particular, it’s his explanation of how the cathartic release of his own feelings of the loss and grief channelled from “an inner cauldron of emotion” that helped him to convey Red’s unimaginable tragedy, as well as how he takes inspiration from some of music’s most distinctive orators when he embarks on an unhinged trail of retribution, that forges a link with some of metal’s leading figures.

“For me, all art is inspired by music on some level. Even when I come up with ways of speaking dialogue it has a musical intent to it,” Nicolas explains in that riveting enunciation that’s become his trademark. “There’s one example in Mandy where I say, ‘Did you rip my shirt?’ I knew I was going to go there with the melody and vocalisation, and even though I’m a ‘film person’ and not a singer, I can still hear some of the dialogue as if I’m singing, almost like a metal singer. To me, the voice is very gravelly and goes almost operatic, from a growl to a scream, which is metal all over. I think there is some influence there, from Dave Mustaine of Megadeth, or sometimes Axl Rose’s vocalisations come into the process by virtue of osmosis, by being around it.”

Set in 1983, Mandy is cut through with rock references, from the guitar widdling of the intro, to King Crimson playing over the opening credits and the Mötley Crüe and Black Sabbath t-shirts worn by Mandy herself (played by Andrea Riseborough) to a monstrous motorcycle gang that resemble Slipknot mutating into Kaiju monsters, the berserk fantasy axe wielded by Red and the movie’s title card, with its thorny, none-more-metal, indecipherable font.

With the lavish visuals and synth-heavy score attacking the senses over the plot’s berserk manifestations and philosophical tangents, Mandy more closely resembles a nightmarish progressive rock album come to life, shot through a cocktail of hellacious mind-altering chemicals, with the second half the inevitable, searing comedown of visceral carnage and wild-eyed fury.

There’s a fair claim that this might be the most metal film Nicolas Cage has been involved with to date – which is no small claim for a man who once shot a faux-trailer for Werewolf Women Of The SS directed by his friend, Rob Zombie. As Nic reveals, it was a love of horror that saw him become friends with our Rob, via another rock luminary, Johnny Ramone, one of Cage’s closest friends and best man for his marriage to Lisa Marie Presley.

“We were very close because we had interests in horror films,” says Cage. “Johnny was a huge horror fan and would come over to my house and look at the great old horror comic books and posters I had. I would go over to his house and he would play me a very extensive video collection of horror that he had collected over the years. Rob [Zombie] was a friend of Johnny’s and he brought Rob into my life, so he and I became friends. So we had this connection with horror and music.”

If the thought of Nicolas Cage, Johnny Ramone and Rob Zombie hanging out and discussing music and movies seems too cool to be true, that’s nothing compared to others who were brought along to join the party.

“My friends were Tom Waits and Kirk Hammett from Metallica. So I brought them to the table and Johnny brought in Eddie Vedder from Pearl Jam,” explains Nicolas. “We all became friends together, this circle of horror movie fans and music fans. That was a great time. It was a lot like the old French salons, where we were talking art, film and music. Eddie and Johnny would do this funny thing called ‘The Mentalist’, where Eddie would start reading people’s minds – I don’t know how they did that but that was one of their jokes. Tom went on and did a cover of a Ramones song. It was a very creative, give-and-take experience that I was proud to be a member of.”

While hanging out with punk rock founders, grunge legends, the guitarist in the biggest metal band of all time and being married to the daughter of Elvis are an incredible list of references, it’s when Nic starts to discuss metal’s roots and his appreciation of more extreme realms that the actor’s metal credentials become iron-clad. While he’s keen to stress his love and appreciation of a wealth of music, from rock and blues to gospel and classical – he’s on his way to the opera after our chat – it’s thanks to his son, Weston, who has performed with the black metal bands Eyes Of Noctum and Arsh Anubis, that a fondness for musical forms as terrifying as his beloved horror movies developed.

“Weston got me into the black metal music that is so popular in Norway. Black metal is something that gets a pretty bad rap, because of the church burnings [in the early 90s] and so on, but the music itself came from classical music! Weston was listening to bands like Dimmu Borgir and I thought the singers were outstanding, and the music was classically influenced – I think that’s the root of metal, which is interesting enough in itself as it springs from Bach, Wagner and Beethoven. You can’t say that about so many forms of music, as so much of it came from gospel and African music. I think there’s something to be said for that.”

Well read in metal theory, a student of Dave Mustaine for Mandy and BFFs with metal royalty. There’s no doubt Nicolas Cage is Hollywood’s most unlikely defender of the faith.

Mandy is out now on DVD and Blu Ray