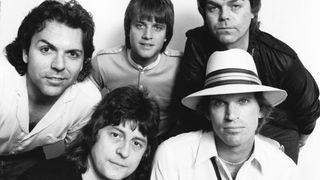 The title track of Survivor’s third album became the biggest hit song of 1982. Eye Of The Tiger topped the US singles chart for seven straight weeks, and brought the melodic hard rock band from Chicago a Grammy and an Oscar nomination.

Survivor’s creative linchpins were guitarists/composers/producers Frankie Sullivan and Jim Peterik, but it was Sylvester Stallone who made Survivor stars. Impressed by the band’s first couple of hits, the movie star/director sounded out his friend, Scotti Bros label boss Tony Scotti, to see if Survivor would help with the soundtrack to the upcoming Rocky III.

Peterik is no longer with Survivor, but he recalls how Stallone left the pair identical answerphone messages (“Yo, Jim. This is Sylvester Stallone. Gimme a call. We need to talk”) to begin the collaboration. Sullivan, however, begs to differ.

“I love Jim, but he embellishes things a little,” he chuckles. “Sly had liked Poor Man’s Son [the band’s first Top 40 hit, from 1981’s Premonition], but it was Tony [Scotti] that played cupid between Stallone and us.”

They both agree, though, that Stallone insisted the song had “a pulse” to accompany boxing glove-clad fists being slammed into bruised eye sockets. The song’s punchy, staccato riff was perfect.

“Stallone sent the first 10 minutes of the film for us to watch, and I was so upset when it cut out,” he laughs. “So I told him I needed to see the rest of the movie to do it justice. It was totally untrue, I just wanted to know how it ended.”

In fact, although Sullivan and Peterik offered a ballad called Ever Since The World Began that they thought would be used instead, Survivor broke through with a tough-coated anthemic rocker.

“We’d recorded Eye Of The Tiger as a demo on February 1, 1982, and that’s the version used in the film,” Frankie recalls precisely. “Sly liked it so much he didn’t wait around for us to re-cut it, though the version on our record was done in a professional studio.”

In fact, on the VHS cassette of the film that Stallone sent Sullivan and Peterik, Queen’s Another One Bites The Dust is in the place where Eye Of The Tiger ended up.

“That’s right,” Frankie confirms. “When one of my idols, Brian May, attended one of our shows in Los Angeles in 1984, he brought up that subject. I offered to send him a copy of the tape, which I still own.”

Eye Of The Tiger was released as a single three weeks after Rocky III hit the screens. The song’s long stint at the top of the chart was almost like winning the lottery for the group, especially for Sullivan, who unlike his partners had been struggling to make ends meet.

“My bandmates were making six figures a year on sessions and commercials,” he says. “I couldn’t read music and didn’t know what a jingle was, but I did know that those guys all had nice cars and houses, whereas I could barely afford my $200-per-month apartment.”

Asked if the overnight success went to anyone in Survivor’s head, he laughs: “Of course. But I won’t tell you who. Going to the Golden Globes and winning Grammys at 24 years old, you have to pinch yourself.”

After a 13-month tour and just one more album, 1983’s Caught In The Game, beret-wearing frontman Dave Bickler’s worsening voice problems caused him to leave the band, to be replaced by Jimi Jamison.

“Playing five nights a week took its toll on Dave,” Sullivan says. “I think he knew he was done with Survivor when we made Caught In The Game.”

Sullivan acknowledges that everything the band have done since – including the theme tune to Rocky 4, Burning Heart – will forever be in the shadow of their biggest and best hit. But he insists he’s comfortable with that.

“Trying to compete with the past is for fools. But I’ll never, ever tire of playing Eye Of The Tiger. That song still kicks butt, man.”

This originally appeared in Classic Rock 94