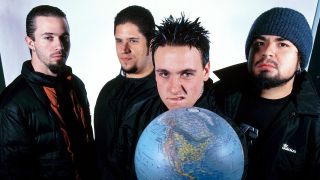 If someone tells you to name a Papa Roach song, you’re going to say Last Resort. It’s a song that has become a staple not just of the P Roach live arsenal but every alternative club night you have been to in the past 17 years. The lead single from breakthrough album Infest back in 2000, it sent the Californian nu metallers into stratosphere, rapidly finding themselves with a mass following, all locked in to the message within Last Resort.

But where did the song come from and what is it really about? We sat down with frontman Jacoby Shaddix to get the full story on the song that made Papa Roach superstars.

It was written on a piano

“We were living in this infamous house in Sacramento with some other bands from the scene, and we were rehearsing in there at the time. The first time the Last Resort riff came around, Tobin [Esperance, bass] was playing it on piano. It sounded like a classical music piece, but we put it on the guitar, gave it that beat, and I remember our manager heard it through the wall and he barged through, like, ‘Play that again, man! that was sick!’ I was like, ‘We need to put this on the record.’”

The lyrics weren’t about Jacoby

“A lot of people thought this song was about me, but it wasn’t. I had been living with a friend of mine, and he attempted suicide. I wanted to write about him, and this song just felt like the time. He went into a mental facility and eventually came out better. He’s in a better place now – he’s a family man, his life’s on fire, he’s killing it. But that song was his story, and I told it in the music.”

It’s different to any other Papa Roach song

“I was working as a janitor in an Air Force hospital, so I was walking around with my headphones in, and I was humming the melody to it, and I brought that melody back to the guys, spit a verse on it, and they were like, ‘That’s just fucking dope!’ I was like, ‘I wanna start this song with a vocal.

"Every other song starts with a riff, but I wanna come out with, ‘Cut my life into pieces…’ the band said, ‘Fuck it, man, let’s do it. Let’s get people’s attention.’ And as soon as we took that song and started playing it at shows, our fans at the time were just like, ‘Play that one again!’ We were playing it at small clubs, parties, coffee shops, shopping centres, skate parks…”

It doesn’t rip off Iron Maiden. Not deliberately anyway

“We caught some flack for that. Some people were like, ‘Oh, you fucking ripped off Iron maiden [the main riff sounds similar to ’81 Maiden track Genghis Khan]’. With all due respect, I wasn’t an Iron Maiden fan when I was a kid. I didn’t become a Maiden fan until 2004.

"I saw them in Canada, all my road crew were big fans and were like, ‘You gotta come see it!’ I was like, ‘Fuck it, let’s go’ and I fell in love with it. And then I listened to [Last Resort] back and was like, ‘Well, of course it sounds like a fucking Maiden riff! Listen to it!’ Ha ha ha!”

It influenced a generation

“The cool thing was that, as years have gone by, we’ve met so many different guitar players who are out now that are like, ‘That was the riff that made me wanna pick up the guitar.’ Brian [Haner Jr, aka Synyster Gates] from Avenged Sevenfold was a guitar teacher, and he told me, ‘You have no idea how many kids came to me with Last Resort and asked me to teach them it.’

"And Zoltan [Bathory] from Five Finger Death Punch told me, ‘Man, when I heard that song, I was just a kid from Hungary, and that song got me into metal.’ You think about those moments and how much of an impact that song really had.”

“It’s still fresh, it still means something, it still unites audiences every night, and it’s saved many, many lives. I meet people every single day of my life, and somebody will tell me that shit. Maybe my purpose on this Earth was to write that song, and that’s fuckin’ A, man. It’s something that’s had a massive impact on music, but also on individuals, and I’m so grateful. It’s one of those songs where it could just be a riff, and you rock out to it, or it could be a liferaft. And for me, that’s dope.”