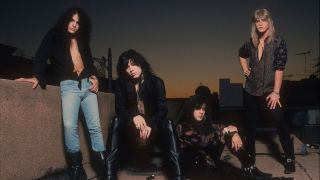 Don’t Know What You Got (Till It’s Gone) is a heart-rending ballad and MTV favourite recorded by the Philadelphia-based foursome Cinderella during the hair-rock explosion of the 1980s. Cinderella singer/guitarist Tom Keifer wrote the song shortly after the band signed their contract with Mercury Records in 1985, but it wasn’t until the summer of ’88 that it became their biggest ever hit single.

“I was on an absolute high back then,” the singer recalls. “We were working with Andy Johns, the legendary producer of the Rolling Stones and Free, on our debut album, Night Songs, and things could scarcely have gotten any better.”

It was while driving to the studio in Gladwyn, Pennsylvania during the recording of Night Songs that Keifer was struck by the idea for a song. Little did he know that it was destined to become something of a self-fulfilling prophecy.

“I was thinking about how great life was and how sad I would be if [the success] all went away,” he explains. “The chorus made a big impression upon me. And although we already had another similar song, Nobody’s Fool, lined up for our first record, when I got to Kajem Studios I sat right down at the piano.”

Cue the arrival of Andy Johns, keen to crack on with the album and in no mood to listen to a half-written song idea.

“Andy is no longer with us and I miss him dearly,” Keifer sighs. “He was well over six feet tall and had quite a presence. He told me: ‘Stop dicking around and get in here, there’s work to do. We don’t need yet another ballad’.”

Under playful duress from Keifer – “Andy said: ‘Okay, Thomas…’ well, he was English!” – Johns agreed to sit alongside Keifer at the piano for an impromptu preview of his new song’s first draft.

“I became carried away with my playing, and when I finally turned around, Andy, this hard-as-nails guy, had a tear streaming down his cheek,” Keifer recalls. “At that moment I knew I had quite a song.”

By Keifer’s own admission, Cinderella had been “banging around in the clubs of Philadelphia” before being discovered by Jon Bon Jovi, although Gene Simmons had sniffed around them a little earlier. However, once JBJ recommended them to his label their rise seemed amazingly fast. The Night Songs album peaked at No.3 on America’s Billboard chart, selling two million copies and later being certified triple-platinum. When Cinderella renewed their relationship with Johns on the follow-up, Long Cold Winter, the inclusion of Don’t Know What You Got (Till It’s Gone) was a complete no-brainer.

“The problem was that we cut the song way too fast,” Keifer recalls. “So here’s a secret: we had to start over again and slow down the drums, which we wanted to keep. That’s why they sound so huge; because Varispeeding affects the pitch.”

Those drum parts were actually played by Cozy Powell, and not the credited band member Fred Coury, who Johns considered “a little inexperienced” for the track’s groove and drive.

In what became a puzzling trend over the course of Cinderella’s first three albums, Long Cold Winter was a better record than Night Songs and yet it sold fewer copies than its celebrated predecessor. The bluesy maturity of 1990’s Long Cold Winter also defied an artistic spike to continue the group’s commercial decline.

“I didn’t see it that way, but people accused us of changing our style from record to record,” Keifer says with a shrug. “To me it was a progression; we became better musicians and learned how to paint landscapes, using Dobros, pianos and harmonicas to build up the colours. The writing style didn’t change at all because it was all based on the blues, country and gospel – the ups and downs of life, or falling in and out of love.”

Cinderella’s early status as press darlings would soon cool, and one bemused UK reviewer famously said of Long Cold Winter: “Tom Keifer wouldn’t know the blues if somebody rubbed him face face-down in Mississippi mud”. However, tougher times still lay ahead for Keifer; the four-year wait for Cinderella’s next album, Still Climbing, was due to paresis of his left vocal cord that had been diagnosed as career-ending (see sidebar, left).

By contrast, Don’t Know What You Got (Till It’s Gone) grew ever more popular, and made a poignant appearance in the cartoon TV series South Park as Eric Cartman lay motionless on his bed for its entire duration, surrounded by tissues. “That was hilarious, it really sums up what the song’s about,” Keifer says, laughing.

Some 26 years after Heartbreak Station, Keifer still makes music, and toured extensively for his 2013 debut solo album The Way Life Goes. Cinderella’s best-known line-up (completed by guitarist Jeff LaBar and bassist Eric Brittingham) reunited for live shows in 2010 but have been inactive for the past four years due to LaBar’s ongoing problems with alcohol. Keifer recently admitted LaBar is “pretty much done playing music”. And having pledged as a band not to try again until LaBar sorts himself out, their future looks bleak.

“I’ll make another solo record, but that’s probably it for Cinderella,” Keifer acknowledges sadly with shake of his head. “I’ve moved on, and so have the rest of the guys.”

Cinderella’s one-time superstar status may have ebbed away, as have the band’s future prospects, but as a self-confessed “sucker for ballads” Keifer has no plans to stop performing Don’t Know What You Got as a solo artist, although in slightly different form.

“A few years ago my wife Savanah [Snow, Nashville-based singer/songwriter] and I remodelled it in acoustic form for VH-1, and now we do it unplugged for a while before the band busts into the electric version that everybody knows,” he explains, smiling. “It brings the house down every night.

“Sometimes when Savanah’s not with me on tour at that part of the show when the roadies pull up the stools, I’ll call her and ask the audience to sing the chorus to her at the top of their lungs,” he adds, smiling. “It helps us both out. Nobody wants to be lonely, right?”

How Tom Keifer defied the odds…

Cinderella singer Tom Keifer lost his voice due to to paresis after the band’s world tour for their 1990 album Heartbreak Station. Getting it back involved a long, involved and painful process that saw him tumble into severe depression.

“It was a neurological condition, and I was told that there was no known cure,” Keifer explains. “A doctor actually told me that I’d never sing again. I ended up working with a speech pathologist coach but there was collateral damage. It took six surgeries to repair what happened when I tried to sing.”

Keifer eventually retrained himself to both talk and sing, but, he reveals, “my voice still requires daily maintenance”.