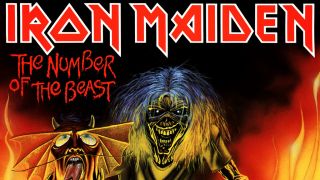 In the new issue of Metal Hammer we're giving away TEN of Iron Maiden's most iconic single sleeves as posters for you lucky lot. But there's more to the Irons' artwork than pictures, here we look at the stories behind each one.

If you want to cover your walls in all this artwork, then pick up the new Metal Hammer here.

Derek Riggs had already painted the punkish ghoul that ended up as Iron Maiden’s debut LP sleeve, but for the first single – his first bespoke piece for the band – he was asked to introduce Eddie in the shadows, holding back the revelation of his hideous features for the album. Riggs painted the skeletal menace wielding a broken bottle (by a wall scrawled with graffiti homaging Led Zep, Scorpions, AC/DC, Judas Priest and Sex Pistols), as a terrified rocker runs down a rubbish-strewn alleyway towards what appears to be another Eddie lying in wait…

Again setting the scene in the streetlamp-dappled East End back-alley milieu where all Maiden’s early artwork takes place, this is a sequel to the Sanctuary sleeve where Eddie controversially slew Britain’s new prime minister Margaret Thatcher. As our smug-looking hero stalks the night with a woman in uniform on each arm (one’s a schoolgirl; let’s hope Eddie won’t be another ‘80s icon brought down by Operation Yewtree), Thatcher is poised for revenge. “I couldn’t find a profile of her so I made one up,” admits Riggsy on his website derekriggs.com. “It’s just luck that it looks anything like her really.”

Frantically painted in a weekend on the wrong drawing board, Riggs wasn’t happy with the result. “That was supposed to be a portrait of a friend of mine called Sylvia,” he reveals on his website, “but because of the other problems it doesn’t look like her and her head’s too small.” Still our fullest glimpse of Charlotte The Harlot, this sleeve was criticised by the right-on press for depicting Eddie attacking a scantily-clad girl, but as Rod Smallwood pointed out, the signed photo of Eddie on the dresser suggests “it’s obviously her boyfriend, coming back from the dead to give her a cuddle!”

The artwork originally intended for Purgatory was deemed too striking for a mere seven inch, and re-appeared a year later as the Number Of The Beast album sleeve. Meanwhile, Riggs set to work on a grisly close-up that more effectively birthed the new series of Satan-themed sleeves, depicting the devil’s face apparently emerging from Eddie’s – or vice versa. “In the shadow of the Devil, there’s Eddie…” explains Riggsy. “The shadowed parts of the Devil were supposed to be crumbling away showing Eddie. The shadow thing didn’t really come across and it just looks like he’s crumbling on one side.”

Having shown the Devil and Eddie manifesting out of the same face, Riggs extrapolated the logical next step in this struggle and depicted the two beasts in hand-to-hand combat on top of a boulder in Hell. “I did this one on my own just because I thought it was a good idea,” Riggs reveals. “It kind of fitted in with the power struggle in Hell kind of idea. The Devil’s wings were supposed to be made of smoke and lightning, but it never came across.” Eddie’s weapon was turned into a tomahawk to reflect the lyrical content of the song.

As if there was any doubt about the conclusion of the Devil vs Eddie fight depicted on the Run To The Hills sleeve, this follow-up piece confirms victory for our hero, who’s seldom looked so chuffed, jubilantly proffering the Devil’s dripping severed head (complete with lolling forked tongue) to the viewer. “The Devil was supposed to look like Salvador Dali but I couldn’t get any good pictures in time,” says Derek Riggs on derekriggs.com, adding “This picture was done stupidly fast as well.”

Although set above the Hellish landscape of the previous year’s artworks, the airborne padded cell from Piece Of Mind’s sleeve is visible as the floating box in the sky above the burning Icarus, rendered as the falling angel from Led Zeppelin’s Swan Song logo. “I could have done a much better job with the wings, but for some reason, that day I really didn’t want to paint wings,” Riggs reasons, eccentrically. He had fun with other bits though: “The rock magazines censored this because of the angel’s penis, but there’s a couple fucking doggy-style on top of the hill…ha!…I win.”

Eddie sheds his tatty jeans-and-T-shirt combo for the first time, changing into a smart red cavalry uniform for arguably his most popular incarnation – the Trooper tattoo taking pride of place on Steve Harris’s forearm. There is something highly stirring about this image of bullish resilience, but Riggsy reckons its appeal is more simple: “I think this is popular because it has a lot of red and blue in it,” insists the artist. “The other covers don’t have much red. I resist using red just for the sake of it (can you put more blood in it Derek… whinge whinge).”

The second of three ‘Eddie At War’ sleeves, 2 Minutes To Midnight casts our hero as a soldier of the near-future adopting the iconic stance of the ‘Lord Kitchener Wants You’ recruitment poster from the First World War, enjoying a cigar and coolly poking an accusatory finger at the viewer as a dazzling mushroom cloud explodes behind him, effectively kick-starting metal’s mid-80s aesthetic obsession with nuclear armageddon. The descending flags are from topical contemporary trouble spots engaged in armed conflict around the time the single was released: USSR, Afghanistan, Iraq, Iran, UK, Argentina, USA, Israel and Cuba.

Instantly cementing the band’s reputation for dogfighting derring-do even before Bruce or Nicko learned to fly, the thrilling Aces High sleeve sees Eddie move in to fire at the mainstream of bombers in the cockpit of a Battle Of Britain Spitfire. “I stole the idea from a comic cover, Sgt Rock I think, sometime in the 1960s,” admits Riggsy on his website. “The film poster for the Spielberg film 1942 stole the same idea but they gave the pilot a cigar as well, but Eddie has a healthy lifestyle and doesn’t smoke.” Unless an atomic bomb has just dropped, obviously.

All of these posters come FREE with the new issue of Metal Hammer – get your copy now.