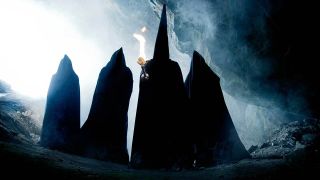 “I’m 44 years old, I have too many responsibilities and no free time at all. I had to beat my demons, to find some free time to escape from this life, and to create something that is unique. These are the demons you have to fight, and sometimes you don’t want to fight. But I like to fight to the end.”

It would be something of a shock to hear Sakis Tolis, the man behind a band called Rotting Christ, speak of backing down from a fight. But the name is not the story of the band. The Greeks successfully morphed from an infernal underground thunder in the early-to-mid 90s into a quasi-goth metal band around the turn of the century. They then promptly went back to acerbic viciousness for 2007’s stunning Theogonia, and have spent every record since getting simultaneously nastier and (bar 2010’s slightly mixed AEALO) better and more epic. Latest album Rituals is not the sound of a band mellowing out well into their third decade of existence, but of a dark, hypnotic exorcism of the demons within.

“When I was a kid, everyone said metal was music for kids. The more I grow up, the more appetite I have for fierce metal creation,” says Sakis. “I’m true to my own spirit, and I love what I’m doing. I take metal very seriously. Some people just think, ‘I was a kid and listened to metal – I was bad – but now I’m grown up’ and all this bullshit. I have also grown up, but I’m still into metal music because I’m faithful to my roots.”

The change over the course of their career – particularly their recent career – may on the surface appear to be a mystery wrapped in an enigma, but after a little digging, quickly makes clear, no-bullshit sense. Sakis is the sole composer in the band, so there is no creation-by-committee steering the band back into creative ruts or rehashed ideas, and any spark of invention in a hitherto uncharted direction is free to be followed. As a result, changes in approach or attitude or viewpoint – or, indeed, musical preference – can have a profound effect on the music.

There are demons you have to fight, and I like to fight to the end

“I like more epic metal! I like Manowar!” Sakis laughs when asked why Rotting Christ got more epic in the last decade. “It’s the way I think these last years; I like to make things a little bit bigger – not in my life, but in my art. I work on different techniques. For example, sometimes I use choirs – not like symphonic choirs, but choirs that are influenced from all around the world. I read a lot before I write a song. It’s not like in the past, where I would grab a guitar and play it for 10 hours, then when I had a riff, I would record it, and come up with a song. Now, I work a little bit differently. The creation is more rounded, so it makes more epic songs.”

That explains the stylistic evolution. It also explains why Rituals is highly conceptualised, taking in Sanskrit chakra (Devadevam), Christian Orthodox exorcism (Apage Satana) and William Blake’s Poetical Sketches (_For _A Voice Like Thunder, narrated by Paradise Lost’s Nick Holmes). The missing piece of the puzzle – how a band started doing their best work 20 years after their first songs – is even easier to explain.

“I think we have taken the band more seriously the last few years, and I don’t know why. Maybe because I had my first child in the last 10 years. I have faced life differently,” muses Sakis. “I have two kids now. If I had never had any kids, by my age, I could easily be in jail. Having a kid in my life made me less selfish. I concentrate on the most important things in my life – which, apart from my kids, is music. I take music more seriously. I say, ‘Don’t be wasted anymore. Try to create what you love. Do it seriously.’ This is the result.”

If there is a recurring theme talking to Sakis Tolis, it is of how important it is to him to stay true to who you are. For all of extreme metal’s occasional adherence to orthodoxy, denying the individual their truest expression, and for all the bands happy simply to aspire to be someone else, the reason the greatest bands – from Bathory all those years ago to Bölzer now – stick out so strongly is always the strength of their personality. Perhaps the key component of what makes Rotting Christ continually creative is that they are aware of how important it is to be true to your nature – albeit with a little room for self-reflection.

“I don’t want to be very big. That would destroy my life. I just want my music to touch people’s souls around the world. This is what I fight for. I just like to be myself, and I have to fight for this. If we’re more successful, I don’t care that much. I don’t care about being rich, I would just like to be rich in my soul. If I touch someone else’s soul on the other side of the planet, for me, this is the best ambition I could fulfil.”

There are few parallels to be found in extreme metal to the story of Rotting Christ. Primordial are perhaps as close as you can get, and they have (the frontmen’s mutual love of Manowar aside) many immediate differences – and you sense this is how the Greek band want it. The recurring refrain in talking to him is of the virtue of uniqueness, of honesty over artifice, and of spiritual rewards being of the greatest value. Perhaps the true heart of Rotting Christ is best summed up with how Sakis says goodbye to Subterranea: “Be true to your own spirit.” A preaching Sakis appears determined to practise.

Rituals is out now via Season Of Mist