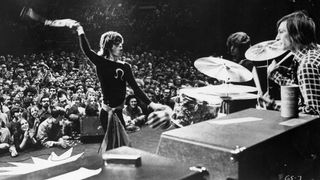 Arguably, the Rolling Stones defining recorded statement, with its louche and languid feel, its casually decadent travelogue-of-shag lyric, Honky Tonk Women marked the band’s final ascent to No.1 on the UK singles chart.

The fateful timing of its release on July 4th, 1969 (the day after the death of their recently sacked ex-guitarist and erstwhile focal point/leader Brian Jones and the day before a free Hyde Park concert swiftly re-purposed as his memorial), may even have helped seal its chart-topping success. It’s not even beyond the realms of possibility to suggest that of the Stones’ eight UK number ones, the sole example not to feature Jones only made the top spot having been adopted by bereft fans as his final epitaph.

That said, Honky Tonk Women is more than anything an emphatic indication that there’s been a changing of the guard at the Rolling Stones. Until Jones’ replacement, 20-year old ex-John Mayall’s Bluesbreakers whizz-kid guitarist Mick Taylor, got his hands on it, Honky Tonk Women was an unremarkable Gram Parsons-influenced tribute to (or perhaps more accurately a self-conscious parody of) Nudie-suited classic country.

Honky Tonk Women started out life as Country Honk. It was December ‘68 and Mick Jagger and Marianne Faithful, along with Keith Richards and Anita Pallenberg were on their way from Lisbon to Rio, with the ship-born leg of the journey complete and the Mato Grosso on the near horizon.

“We lived for a few days on a ranch, where Mick and I wrote Country Honk sitting on a veranda like cowboys, thinking ourselves in Texas,” remembers Keith Richards. “It was written on acoustic guitar, and I remember the place because every time you flushed the john these black blind frogs came jumping out”. How very Rolling Stones.

Once in the hands of Mick Taylor, Honk was reinvented, and as a consequence the entire modus operandi of The Rolling Stones shifted ever so slightly further from roots-angled pop toward raunch-wrangled rock. Where Brian might have thrown a marimba into the ring or blown an opium-scented wheeze into a recorder, Taylor provided the wiry, six-stringed musculature of a well-matched sparring partner for Richards, and as they locked gin-soaked guitar necks and weaved for the very first time, magic happened.

“Our styles were very different,” Taylor remembers. “Keith was influenced by Chuck Berry and me by B.B. King – and it worked really well. During a song we would switch back and forth between rhythm and lead and we were very supportive of each other.”

And that’s Honky Tonk Women. And give or take a freshly laid Mick Jagger having both nose and mind blown simultaneously, Jimmy Miller giving it plenty on cowbell, and a pair of pugnacious saxophones virtually coming to blows on the break, that’s what the Stones’ have been doing ever since. Jagger preens priapically, Charlie’s propulsive kick-drum lifts the beat by the seat of its pants and Richards and Taylor (or latterly Richards and Ron) employ ever more audacious intricacies into their ancient art of weaving. An arcane art, which while not exactly rocket science will invariably fly you to the moon and back again.

Charlie Watts: a drummer’s guide to surviving the Rolling Stones