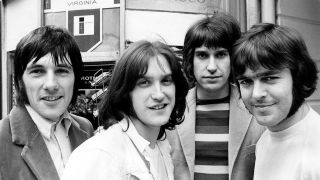 You Really Got Me was Britain’s Tutti Frutti, a brutal thunderbolt of teenage lust that explosively changed the game. Ray Davies was the singer-songwriter of The Kinks’ first hit, but it was kid brother Dave Davies who created its fuzzed-up guitar sound by slashing his amp’s speaker with a razor in hooligan frustration, to finally express his adolescent rage.

Thereby inventing hard rock, Hendrix was among those who listened in awe, and later asked Dave how he did it. Subsequent tracks such as All Day And All Of The Night and Who’ll Be The Next In Line were templates for The Who and US garage rock, while a sequence of innovative singles stretched from See My Friends’ use of sitar-like sounds to Lola’s sly gender-play in 1970, which rode in on a last great riff to predict the new decade’s glam themes, and surely influence the same year’s Layla.

In between, A Well Respected Man introduced local subject-matter and literate satire to British pop, Waterloo Sunset was a dream-like hymn for lonely Londoners, and Sunny Afternoon soundtracked England’s World Cup win. The Beatles or the Stones? For many misfit listeners, the answer was always The Kinks. Pete Townshend for one rates them above even The Who.

Dead End Street meanwhile smuggled scenes of grinding poverty into the Swinging Sixties chart, to the particular delight of fellow working-class listeners, and many future punks. “The Kinks were a major influence on The Clash,” Paul Simonon says. “Their lyrics and subject matter were an important template for us as a band.”

The Kinks were always punk in spirit: while the Stones gained bad boy press for discretely pissing on garage walls, Dave was almost decapitated during an onstage ruck, and The Kinks became the sole British Invaders to be banned by America, partly due to consistent bolshiness.

Frustrated at the lack of attention given to now-classic albums such as The Kinks Are The Village Green Preservation Society, Ray turned his back on singles in the 70s, instead writing sometimes lumbering concept albums still studded with fine songs.

Cussedly climbing back to the top in the States, where they became the 80s’ least likely arena-rockers, The Kinks finally fell apart in 1996. They have several legacies: violent sonic innovation and achingly personal emotion, powered by the unbowed, extreme individuality of two tempestuous North London brothers.

The Kinks Are The Village Green Preservation Society (PYE, 1968)

"With Village Green,” Ray considered of the flop that now defines The Kinks, “I wanted to write something that… if we were never heard of again, this is where we came from. This is what we like, and who we are.”

Turning North London’s parks and woods into a mythic kingdom where nostalgia for childhood and a rustic past are subverted by harsher adult emotions, this was, Ray has said, “a final stand”.

Working up the varied, gentle music in Ray’s back room after years of studio rush, the original band peaked here.View Deal

Ray was hanging out with Warhol in New York by 1971, his roots in Muswell Hill unravelling fast. His response was to add pub-jazz brass to The Kinks’ line-up, and write a raw English country-rock album about his working-class family. 20th Century Man’s muttered blues about napalm-dropping modernity pines for Shakespeare instead.

Though Dave’s screaming guitar has been silenced, this is one of rock’s most rebellious albums. It also contains maybe the most gorgeous Kinks song, the ballad Oklahoma U.S.A., about the dreams which make hard lives bearable: ‘She walks to work but she’s still in a daze/She’s Rita Hayworth or Doris Day'.”View Deal

Written to soundtrack a TV film that was never made, beaten to the punch by Tommy as the first rock opera, and continuing a period of commercial freefall for The Kinks, Arthur - subtitled The Decline and Fall Of The British Empire - filters themes of imperial decay through the Davies family’s bitter post-war disappointments.

Its chief glory is Shangri-La, an epic single which chucks in the kitchen sink, firing brass and guitar barrages as it demolishes the suburban dream. Some Mother’s Son mourns a young man’s brains being blown out on the Western Front, and Australia channels the Beach Boys, on The Kinks’ most angry, epic record.View Deal

The Kinks’ most perfect recording, Waterloo Sunset, is of course the towering highlight. Death Of A Clown, in which Dave “the Rave” Davies describes the hungover end of his swinging London party in Dylanesque terms, was the first single under his own name.

Elsewhere, this is the sound of The Kinks slipping away from the new psychedelic mainstream of Sgt. Pepper and the Summer of Love, instead favouring quietly profound songs about small English things: cigarettes, toy soldiers and tea. As their peers’ minds cosmically expanded, The Kinks became mature miniaturists.View Deal

Lola Versus Powerman And The Moneygoround, Part One (PYE, 1970)

Lola was a blockbuster chart comeback, but the LP containing it was roundly ignored. Ray’s decision to make it a protest album about the music biz probably didn’t help.

Dave, still battered by the effects of a brain-snapping 1969 acid trip, paused in his tailspin to write Strangers, a plea for understanding perhaps directed at Ray, whose This Time Tomorrow meanwhile found him wistfully alienated by the rock life. Such tender, bruised songs would define the early 70s Kinks at their fragile best.View Deal

Divorce and depression made Ray crack up next. Following a tragicomic onstage declaration that “The Kinks are dead” which was missed by most when his mic failed, he overdosed on pills.

You’d hardly know it, though, listening to this sequel developing the world of the Village Green. Sitting In The Midday Sun returns to that sanctuary at its most bucolically blissful, and Sweet Lady Genevieve is a charming plea to Ray’s missus to give him one last chance.

The second half gets bogged down in an Orwellian plot which would sink the bloated double-album Preservation Act 2 (1974), as the Green’s gauzy concept became too solid.View Deal

Ray jettisoned the concepts and put his pop genius back to work re-invading America; helped here by one last transatlantic smash, Come Dancing, built on a Wurlitzer organ hook which cut through all the synths on the radio. ‘Woke up in a panic, like somebody’s fired a gun,’ Ray announces on the title track, after a series of screams.

With Dave fighting drummer Mick Avory onstage, and Ray’s relationship with Chrissie Hynde hitting the rocks, what follows is crunching arena-rock with hairline, human fractures. The satire of Young Conservatives shows that even in this second act, The Kinks kept their cutting edge.View Deal

Being lauded as Britpop’s godfathers couldn’t save the modern Kinks from 90s irrelevancy, and Ray and Dave were relieved when they faded away.

This US double-album version of a less ambitious UK live release still finds them in fine musical health, combining the jet-engine roar of a monstrous You Really Got Me with an acoustic session, which more delicately revisits their past.

A brace of new studio cuts concludes with To The Bone, in which a rock musician returns from tour to find his wife has left him, with only a Kinks album remaining to remind him of the past. “The needle cut just like a nail,” Ray sighs as the record and his band spin to an end.View Deal

Though Ray’s wish to make Face To Face more cohesive through linking sound effects was mostly abandoned, it’s their first ambitious LP, full of baroque touches, from A Rainy Day In June’s brooding fantasia of lightning-lashed demons glimpsed in a suburban garden to Fancy’s sitar-like drone.

Dandy includes this necessary health warning to Dave: ‘Two girls are too many, three’s a crowd and four you’re dead.’ Too Much On My Mind then confesses Ray’s own shaky condition after keeping The Kinks’ hit machine fed caused a breakdown.View Deal