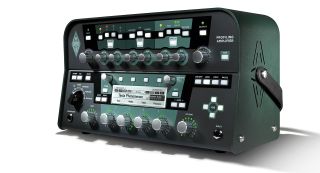 Leaps in digital technology have enabled guitar amp and effect modelling to fill gaps in many a recording and live set-up, with many established players supplementing their backline with modelling units.

While the choice of modern products ranges from high-end Fractal Audio Axe-FX systems to more modest set-ups from companies such as Line 6, all of them open doors to a veritable multitude of new tones and inspiring options.

The Kemper Profiler represents, in effect, the next stage of the evolution of digital modelling, inasmuch as it doesn’t provide actual amp models, but amp profiles. So far, so meh. But here’s the really interesting part: you can profile any amp you like. This in turn enables you to build up a library of all manner of high‑end, high-price boutique amps and combos – a lot more convenient, not to mention thousands of quid cheaper, than having a stack of amps piled up in your living room – without having to sign your soul over to a loan shark.

To do this you simply mic up – or use direct injection (DI) if appropriate – the amp you want to profile, use its controls to get a sound you’re happy with, plug the mic/DI and your guitar into the relevant sockets of the Profiler, connect the Profiler to the amp’s input and away you go. The Profiler does its thing, you save the profile, and you’re set. You can then use the profile as you would if it were a genuine amp. Altering the EQ, the gain and volume authentically changes the tone, and what’s more, it feels right too.

Digital recreations of valve amps still find mimicking idiosyncrasies such as bloom and compression a bit difficult to pull off, thus compromising the ‘realness’ of the playing experience. However, playing through the Kemper feels very close indeed. What’s more, you can visit Kemper’s cloud-based rig exchange service to download hundreds of amp profiles into your own unit. If you don’t have £3,580 to spend on a Two-Rock Classic Reverb 50 (you’re not the only one, mate), the profile is but a click away. You can also download a selection of artist rigs too.

Great for when playing live, even better for recording, the Kemper is easy to use and offers virtually limitless possibilities. The Profiler Classic, pictured here, sells for around £1,450.

Get ready to Dumble: When mere valves and electronics blur into legend.

If Kemper’s style of digital wizardry isn’t for you, consider the mysterious world of Alexander ‘Howard’ Dumble, the man whose name is on what are arguably the most revered guitar amps ever built.

Those colloquially referred to as ‘Dumblebores’ guestimate that he made fewer than 300 amps throughout his entire career, and an Overdrive Special, if you can find one, will set you back at least £70,000. Why? Because not only are they preposterously rare, but they also sound utterly incredible.

Joe Bonamassa has three of them, and other owners include Carlos Santana, Robben Ford and Larry Carlton. Texan blues deity Stevie Ray Vaughan (pictured) also used a Dumble, specifically a 1984 Steel String Singer head, which, according to his lauded tech René Martinez, was “beautiful, just gorgeous”.