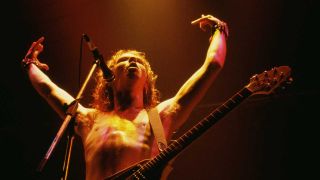 In 1984 he joined Elecktra Records as an A&R man, where his first signing were Metallica. In this excerpt from his upcoming autobiography 'I Am Michael Alago: Breathing Music. Signing Metallica. Beating Death', he tells the story of that night.

I Am Michael Alago is available to pre-order from Backbeat Books.

That night, in 1984, as my friends and I arrived at Roseland and quickly made our way to the bar, I knew I was in for something earth-shattering. We ordered a few beers and met up with Bob Krasnow and Mike Bone, vice-president of promotion at Elektra. I had asked them to come and see Metallica with me, because I knew I would ultimately need Bob’s approval in order to get them signed.

Bob and Mike both hung out at the bar during the show, while I pushed my way into the crowd and eventually lost my friends.

The place was packed. There must have been over 3000 fans – all of them screaming, head-banging, and raising their fists in the air. There was an intense electricity everywhere. The place reeked of beer and most of the crowd was made up of sexy young men in jeans and black leather jackets. They all knew they were about to hear something that would completely blow their fuckin’ heads off.

When Metallica finally hit the stage, the crowd went ballistic. Although Anthrax had played a raucous first set and got a terrific reception, ultimately, the crowd wasn’t there for them. They weren’t there for Raven either. The crowd was waiting for Metallica to come on and destroy the place.

At the start of the show, they smashed into the pounding lead of Phantom Lord with speed and brutal force, followed by The Four Horsemen, then the debut of the song For Whom the Bell Tolls. The sound was loud, raw, and crushing. The music was more intricate than I’d ever heard before – it broke down everything any of us knew about metal.

In the early eighties, thrash metal was still a slowly simmering scene. Not unlike the punk rock world six years previously, these types of metal bands were boiling under the radar – though it wouldn’t be long before they became the radar themselves, the standard against which everything else in that genre would be judged.

When the show ended, the crowd was still insane, screaming madly, banging into each other, crushing and stomping on the balcony, I thought the ceiling rafters would crash down on us. The fans were all grabbing one another’s leather jackets, in awe and disbelief. We never wanted Metallica to leave the stage.

After the set, I ran to the backstage area. Muscled, tattooed, security guards wandered around with suspicious looks at everyone. My heart was pounding. Raven was gearing up to go on stage and roadies and techies dashed around, prepping for the headlining stars.

I found Metallica’s dressing room and I pushed open the door, startling all of them. I remember James pulling his towel off his face and looking at me, completely confused. I quickly turned, shut the door, and locked it. Then I looked back at all of them: James Hetfield, Lars Ulrich, Cliff Burton, and Kirk Hammett.

I ran up to each one and hugged and kissed them, screaming how fuckin’ awesome I thought they were, how I had never heard anything like them, ever. I could see that these four young guys from the West Coast with sweat dripping down their long, curling hair, thought I was out of control. After they wiped the moisture off their faces, and looked at me, I’m sure they were thinking, “Who the fuck is that guy?”

Well, I certainly didn’t look like a fucking record company executive. I was the same age as they were – twenty-two, twenty-three – from Brooklyn, New York, in black jeans and a Metallica T-shirt. I looked at them with excitement and said, “I’m gonna sign you and your lives are going to change forever!”

At first, it seemed like they were about to laugh until Lars suddenly announced, “Guys! That’s Michael Alago from Elektra Records!”

The next day, the four of them showed up at the Elektra offices. I met them in the conference room and ordered up Chinese food and beer. Everyone was excited and anxious to talk. Cliff Burton, the dashing bass player with long, dark, reddish hair and bell bottoms with elephant-sized flared legs, was the most talkative and professional.

He led the conversation as we bounced ideas and plans back and forth. They were also interested in Elektra’s recording history so I gave them cassettes and LPs of The Doors, The Stooges, and The MC5. We had a terrific afternoon. There was only one problem.

They were still under contract with Megaforce.

I Am Michael Alago: Breathing Music. Signing Metallica. Beating Death is published on March 25 in the US and April 1 in The UK.