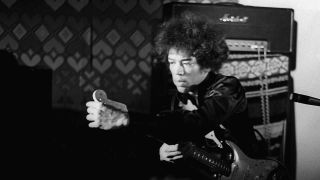 A new book, Jimi Hendrix - The Day I Was There, tells the story of Jimi Hendrix's live shows from those who were there: the fans, the musicians, the promotors, and the accidental bystanders.

Amongst accounts from the likes of John Mayall, Terry Reid, Brian May and Eric Clapton comes this excerpt from industry veteran Rod Harrod, the man who booked Hendrix to play his first UK show, at The Scotch Of St James in London, on September 26, 1966.

Jimi Hendrix - The Day I Was There is out now.

When he appeared at my club, the Scotch of St James, it was the first time he performed as Jimi Hendrix. He had to change from being Jimmy James, which he did on the plane coming over, as there was already Jimmy James and the Vagabonds. If he hadn’t, there would have been no Jimi Hendrix, because he only had a seven-day tourist visa. That was all Chas [manager Chas Chandler] could get him on the way in from the US.

I thought I’d get down there about 11 o’clock to sort something out. It was a Monday night. There wasn’t a single record company person there. Chas invited them, but nobody came. Jimi went on and did four or five songs and when he came off stage, a couple of guys were jumping over the tables and chairs to try and get to him. One guy in particular was saying to Chas, ‘We want to manage him.’

I’ve got a picture of the actual amp he plugged into, which belonged to the lead guitarist of the VIP’s. He was an electronics buff.

America turned Hendrix down, virtually. He’s sold more albums since he’s died than he did in his life.

Jimi turned everything way beyond advisable levels. Feedback was coming from everywhere and it was a club that only held 120 in the downstairs room maximum and another 50-odd upstairs, if you squashed them all in.

We only served miniatures, like you get on an airline. A Scotch and coke would be 12/6 (62p). It was empty when I took it over. They weren’t doing a thing. But I peppered the industry with free memberships and on our official opening night we had three Beatles, three Rolling Stones, two Who and two Kinks out of 130 people. It’s like the whole of the charts was there, and remained while I was there. We would have a house band every week. One week it would be the Graham Bond Organisation with Ginger Baker and Jack Bruce. Another week we’d have Mick Fleetwood and Peter Green, and Rod Stewart would be in another band. Those were our weekly bookings.

The jam sessions were unparalleled. But then every month to six weeks I booked a top American soul or blues or Motown artist, from Gladys Knight and the Pips to Solomon Burke and Fontella Bass. Other than having a sister outfit of the Krays coming and putting pressure on us to pay protection money, everything went well. When Princess Margaret was there I put a bottle of Black Label on the table in front of her and left them to serve themselves rather than serve them miniatures. It was that type of prestige place. We served no beer. The only time we served beer was when we sent for some expensive Swiss beer for Darryl F. Zanuck.

So it was unusual, even on a Monday night, to have virtually nobody there who was famous. Except for one person who claims he was and who has dined out on it for the past 50 years - Mr Paul McCartney. He says it was one of the most important days of his life, but I can’t recall him being there.

Kit Lambert and Chris Stamp, The Who’s managers, were there, and when Jimi had played they were falling over themselves, tripping over the chairs to get to Chas. They told him, ‘He’s great. We want to manage him.’ Chas said coldly, ‘Sorry, boys, I’m going to be managing him with Mike Jeffery.’ ‘Well, we want to produce him.’ ‘Sorry, boys, I’m going to produce him.’ They were trying desperately to think of a way to get involved. ‘Well, we’re starting this label. We’d like to put him on our label.’ And he said, ‘Now you’re talking. Let’s go upstairs.’ They went to the quieter part where the Chesterfield armchairs were and thrashed out the heads of an agreement of a record deal on one of our burgundy paper napkins. And I don’t know how you write on one of those.

That was in September, and they were under a legal obligation that they couldn’t start the label until the following March. But that agreement was enough to get him his visa. ‘Hey Joe’ was  not on their label, Track Records. It was on Polydor because Chas needed a record out. He was broke. To keep him and Jimi in Hyde Park Towers he’d sold off most of his collection of bass guitars. Jimi wouldn’t have had a look in if Chas hadn’t been in with the ‘in crowd’ and known all of us.

Chas leant on everyone in a very nice way to do this and do that and support him. Brian Jones introduced him on stage at Monterey. He was on a record label owned by The Who’s management, so The Who were close to him. He was accepted right into the inner circle of the top echelons, but mainly because Chas was.

At the same time Chas went upstairs to talk with Kit Lambert and Chris Stamp, Zoot Money and his wife Ronnie and Kathy Etchingham arrived. Kathy was renting a room in Ronnie Money’s house in Fulham.

And Linda Keith arrived from somewhere. Keith Richards lost his virginity to Linda. Jimi was putting a hit on Kathy and Linda was getting very uptight, as if she owned Jimi. Linda introduced him to Chas, she’d got him a gig here, she’d given him a guitar, etc. There wasn’t an altercation as such, but Jimi admitted he was virtually living in Linda’s hotel room in New York, which is where she was staying because the Stones were out on tour. At one time she gave him a white Stratocaster, which went the same way as about five or six other Strats broken on the back of beds when Jimi got uptight or a woman tried to use it as a hold over him. The one he brought to England was almost cream with smoke dust. It was far from white, with burns on the head where he stuck his cigarettes while playing.

Kathy had been clubbing it the night before and was asleep upstairs. Ronnie Money went up and said, ‘Kathy, you’ve got to come and meet this guy downstairs - he’s phenomenal’. Kathy said, ‘Oh God, I’m tired, I’m asleep.’ She wouldn’t come down. But they brought her down to the club that night and that was the beginning of three years of living with Jimi. That first night she stayed in a single bed in Hyde Park Towers and they stayed there a few weeks. Then they, with Chas and Chas’s Lotta, moved into Ringo Starr’s flat in Montagu Square, which McCartney used as a demo studio and John Lennon and Yoko Ono used. That’s where they took the pictures of the nude album, Two Virgins. Ringo had to throw Jimi out because he got high and threw paint all over the walls. Then they moved to an address in Mayfair.

Kathy had been my deejay at the Cromwellian. She followed me over to the Scotch, but Kathy took the deejay booth and output of music as being her domain. I normally left her to her own devices but had a copy of a Beatles acetate, which was their next single. There were eight of them. The Beatles had one each. George Martin had one. Brian Epstein had one and there were two locked in the safe at EMI. One of the acetates found its way to my club. If you have that and you’re running a top club, you play that to death maybe every two, three or four records so everybody who’s in there that night can say, ‘I heard the Beatles’ new record first’. But Kathy played it twice and then said, ‘It doesn’t fit with my format’. So I said, ‘You go and perform your format somewhere else, Kathy.’ And I fired her. So an ex-girlfriend took over. I didn’t mind Kathy being there socially. She was a good friend of Brian Jones. She was a good friend of Keith Moon. I think she had an affair with both of them.

Are You Experienced was premiered at the Scotch as a thank you to us for putting him on. It was the first time it was ever played.

Jimi Hendrix: The Day I Was There is out now.