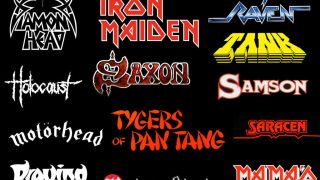 Three bands played at the Music Machine on May 8, 1979. Classic Rock's Geoff Barton was in the audience, and put a name to the chaos.

It was a defining moment in the annals of rock: the birth of the New Wave Of British Heavy Metal. Three bands – Angel Witch, Iron Maiden and Samson – making a spectacular re-emergence after years of punk rock oppression and doing a their celebratory Iwo Jima-style flag-raising thing in a gloomy old ballroom at the bottom end of Camden high street. But if only it had felt like that at the time.

Hindsight is a wonderful thing, particularly if you’re looking at photographs of Kylie Minogue. But the truth is I had no idea of what I was stumbling across, that long-ago spring evening at the Music Machine – a venue that would later metamorphose into the disco-mungous Camden Palace and then Koko.

“Welcome to the heavy metal crusade!” cried hippy DJ Neal Kay by way of introduction. “It’s peace tonight because tonight is the night of heavy metal in London town!”

Kay – who these days would probably rejoice under the pseudonym MC Catweazle – was the influential disc-spinner at the Bandwagon, a heavy metal haven that used to cling like a festering sore to the side of the Prince Of Wales pub at the Kingsbury Circle, London NW9.

For the Music Machine show, Kay boldly decided to group together a trio of the Bandwagon’s most popular acts under one roof at a major London venue, with himself presiding over proceedings.

It was an ambitious undertaking and I was as full of scepticism as Kay was with enthusiasm. What you have to bear in mind is that, in mid-1979, heavy metal – particular British heavy metal – was on a par with leprosy and everyone was humming My Sharona by The Knack or Rod Stewart’s Do Ya Think I’m Sexy?. Of course, major American acts like Kiss and Ted Nugent were still selling out venues such as London’s Hammersmith Odeon, and I was doing my best to fight a rockin’ rearguard action in the Blondie-crowded pages of Sounds. But quite honestly, to me this Music Machine show looked more out on a limb than a warehouse full of prosthetic body parts.

Angel Witch – all cheesecloth shirts and loon pants – grumbled through songs with titles such as Devil’s Tower and White Witch, proving that they were in league with Satan years before Venom got promotion from the Conference. Driven by Kevin Riddles’ lumbersome bass and the shrill guitars of Kevin Heybourne and Rob Downing, they encored “wiv a fing from an amazing band called Black Sabbaf” – Paranoid, of course. If Angel Witch ever had a finest hour, this was probably it because they received a more positive response than Iron Maiden, the second act on the bill. Amazing but true.

Kicking off in destructive style with Prowler, Maiden were just a four-piece at the time, with Dave Murray the sole guitarist alongside Paul Di’Anno (vocals), Steve Harris (bass) and Dougie Sampson (drums). Despite a promising start, formative versions of Sanctuary, Charlotte The Harlot and Another Life then proceeded to collide into each other horribly. The slow-paced Strange World prompted punters to drift away to the bar until – unbelievably, in this day and age – Maiden were only left with a handful of interested onlookers.

But I’ll always remember the sight of a guy down the front, playing a cardboard guitar lovingly cut out to resemble a Flying-V shape. At the end of Maiden’s set, in a moment of madness toward the end of Innocent Exile, Murray crouched down at the edge of the stage and rubbed the neck of his real guitar up against the fretboard of the cardboard one. It was probably at this moment that I became convinced that this band were destined for greatness.

The evening concluded with Samson – pre-Bruce Dickinson, and replete with drummer Thunderstick in misguided Cambridge rapist-type hood. More exploding bombs than Dresden successfully disguised the fact that this was workaday blues-rock led by Paul Samson’s tortuous guitar. Still, matters perked up when Thunderstick changed costume and came on stage as a wizened old schoolteacher. Cane in hand, he proceeded to give bassist Chris Aylmer six of the best across the backside and spit blood at the audience. You had to be there.

The next day, I spoke to Neal Kay on the phone and he proclaimed: “Believe me, Geoff, heavy metal took the Music Machine last night and won”.

And whaddya know, history has proved that the stubborn old crusty was bang on the button.

Below: bonus video footage not included in original edition: Neal Kay at the Bandwagon, with Danny Baker and air guitar