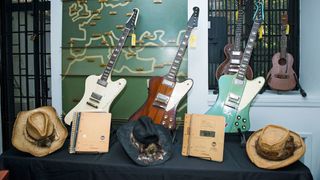 Today in New York City, over 400 items owned by Johnny Winter will go under the hammer.

As usual, it’s the guitars that will attract the serious bidders. The auction includes several of the legendary bluesman’s trademark Firebirds and Lazers, as well as the first instrument he ever owned — a ukulele — but there’s every likelihood you’ll need to find a cool $250,000 down the back of the sofa to get your hands on one.

It’s elsewhere that the auction gets truly interesting, offering a genuine insight into the home life of a career rock star, with dozens of t-shirts, hats, pendants, posters, plenty of awards, jewellery, photographs and more up for grabs.

“One of the most compelling sections of the sale will be Johnny Winter’s notebooks,” say the auctioneers, “handwritten in the late 1960s and ‘70s and filled page after page with songs he composed. But these notebooks only begin to give a sense of the many hundreds of lots in this two-day auction.”

They’re right. There are 426 items for sale, and we’ve selected a few favourites below, from the baffling to the brilliant.

The auction starts at noon Eastern Time today, with a second day’s bidding due to start at the same time tomorrow. The auction can be followed online at Live Auctioneer and Invaluable.