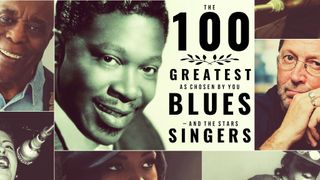 So here it is, a celebration of the 100 greatest blues singers, from the founders of the genre to the 60s blue-rock revolution, right up to the new voices keeping the scene alive…

It’s easy to sneer at Rod’s slew of Great American Songbooks, but dig out 1971’s Every Picture Tells A Story and you’ll hear a blood-and-guts vocalist rollicking through moments like That’s All Right. Even now, we’d love to hear him front a full Faces tour.

99) Ian Siegal: The Brit with a voice of pure bourbon

With a voice so gravelly and raspy, he makes Tom Waits sound like a choir boy, Siegal bridges the gap between the past and the future of the blues. It doesn’t matter whether he is singing traditional Americana, like Mary Don’t You Weep, or his own material, he nails it, each and every time.

Alligator is a magnet for killer vocalists, and the label must have jumped at Selwyn Birchwood. Trading in a lugubrious rumble that dovetails with his brittle fretwork, the Florida bandleader is as tough as they come: the chippy Don’t Call No Ambulance suggests you might need one after all, while Walking In The Lion’s Den unfolds like a seedy night out in Sin City. Above all, that voice makes Birchwood believable: when he drawls lines like ‘misery loves company’ and ‘drank my problems away’, it sounds like an older man’s pain, not a younger one’s posturing. HY

The original Royal Southern Brotherhood line-up found Cyril Neville, Devon Allman and Mike Zito all jostling for the mic, and a silver lining of the split is hearing the latter sing more lead. With confessional early albums like Greyhound, Zito established his modus operandi: write lyrics that truly mean something and the delivery will take care of itself (“It can’t just be fluff or something that rhymes,” he told us. “If you don’t believe a line, you won’t sing it the way you’re supposed to”). It’s an ethos that held firm with last year’s Keep Coming Back, especially on shiveringly sad moments such as I Was Drunk. HY

96) Dan Auerbach: The pride of Ohio

Driving The Black Keys’ early material with a ragged vocal through a knackered mic, Dan Auerbach was always a singer to prick up your ears, but the frontman proved his versatility when he unveiled his falsetto for the band’s 2010 breakthrough Brothers. (“Put that kind of vocal up against really fuzzy guitars,” he told Guitar World, “and you get a really interesting contrast.”) Since then, Auerbach has given us a fistful of vocals to treasure, from the soul swagger of Stop Stop to Weight Of Love’s psych-rock experimentation. Not just a Jack White clone, then.

95) Ottilie Patterson: The forgotten branch on the British blues tree…

A hugely important yet undervalued figure, Patterson was cutting blues records with bandleader, and eventual husband, Chris Barber when British kids were still listening to skiffle. For a fuller account of Patterson’s life and career, read William Stout’s tribute and portrait of the Northern Irish singer.

94) Maggie Bell: She knows the city like a lover…

93) Danny Bryant: Gets temperatures rising with his holler.

The Hertfordshire bandleader was always a safe pair of lungs, able to power through barn-burners like Shut Out The Light. Since 2013’s Hurricane, though, we’ve seen a marked evolution in Bryant’s vocals, with his more adventurous writing giving him a canvas to sing with greater expression and flair. Temperature Rising and Blood Money have only upped the ante – particularly the latter’s tender closing ballad Sara Jayne – though the bandleader himself remains modest. “I couldn’t imagine myself getting up and singing in front of Simon Cowell or anything,” he told us. “I don’t think I’d get very far…”

The best singing lesson Jay Buchanan ever received was watching his mother in church (“It wasn’t because she was a better vocalist – it was because her heart was in it”). Buchanan’s voracious appetite for music led him to the emotive delivery of Steve Marriott, Van Morrison and Nina Simone, and when Rival Sons set out in 2009, his soul-searching charisma was the big draw. He can nail the rabble-rousing stuff such as Keep On Swinging, but the true mark of his greatness is the angel-breath falsetto of True: a song that could reduce a biker rally to a blubbering mess.

Singer/guitarist Tony McPhee was a blues obsessed kid who formed 1960s band The Groundhogs. Named after John Lee Hooker’s Ground Hog Blues, McPhee and his cohorts backed The Boogie Man on his 1964 UK tour before providing the same service for harp legend Little Walter, Jimmy Reed and Champion Jack Dupree when they visited the UK. The band released their much-loved debut album Scratching The Surface in 1968; highlights include McPhee’s strident vocals on Muddy Waters’ Still A Fool.

“I suppose I’ve got quite a big voice,” said Jo Harman when we made her acquaintance back in Issue 5. No kidding. Whether she’s belting it out on (This Is My) Amnesty or breathing in your ear with I Shall Not Be Moved, she can suck the air out of the room with just a few swooped syllables. The influence of Eva Cassidy and gospel singers like Kim Burrell is palpable, but Harman’s worldview is hers alone, and when she applies that pure voice to personal lyrics such as those on Sweet Man Moses, your neck hair may never come down again.

89) Paul Jones: From Manfred Mann to The Blues Band, keep up with Jones

To the great British public at large, Jones will be forever known as the bloke who sang Do Wah Diddy Diddy, but he was also famously the singer Brian Jones approached before Mick Jagger to front his new outfit, The Rolling Stones.

We’ll never know what the Stones would have sounded like fronted by Jones, but his pedigree is there for all to hear on Manfred Mann’s 1964 debut, The Five Faces Of Manfred Mann, one of the finest British blues albums from that decade.

From Howlin’ Wolf’s Smokestack Lightning to Muddy Waters’ I’ve Got My Mojo Working, Jones is on fire. Sadly, as the 1960s progressed, Manfred Mann became more of a pop band. Jones left in 1966 and focused more on acting and musical theatre.

His first love came calling again in 1979 when Jones formed The Blues Band with Dave Kelly and his old Manfreds colleague Tom McGuinness. Since then, he’s been touring almost non-stop, singing the blues, night after night at venues up and down the country, keeping the flame alive. He’s also shared the stage with countless performers including Joe Bonamassa and Van Morrison. Singer, radio presenter and all-round national treasure, Jones is still the man.

88) Jo Ann Kelly: The girl who said no to America…

Kelly was so highly regarded as a blues singer and guitarist that both Johnny Winter and Canned Heat tried to recruit her. She declined. The albums she recorded with Tony McPhee, 1968’s Me And The Devil and I Asked For Water, She Gave Me Gasoline (1969), are classics.

Rougher than Frank Butcher shucking gravel, Bloater’s trademark delivery was honed through early years spent studying Howlin’ Wolf (“Those singers all had those croaky kind of voices, and I guess I was just emulating what they did and making it my own”). He’d probably crash and burn on The X Factor, but that rough-diamond voice box is the perfect tool to spin the jet-black anecdotage of new album Luxury Hobo. The strangest thing is, he’s never even smoked. “Maybe it’s down to the beer,” Bloater shrugs. “But I’ve sung sober as well, so I don’t know…”

86) Eric Clapton: The voice of God

John Mayall was the first to spot Clapton’s potential, handing the guitarist his debut studio lead in 1966 for Beano’s Ramblin’ On My Mind, and introducing a vocal that – even in his early twenties – sounded worldweary and wistful. Jack Bruce’s dominance in Cream pushed EC to the margins (even if he delivered some of their very best moments, including Badge, Crossroads and Strange Brew), but his voice only grew in resonance through the solo years, from the stripped beauty of Unplugged to the plaintive desolation of Pilgrim.

Chosen by Nine Below Zero’s Dennis Greaves: “I know everyone’s going to be shaking their heads, saying Sam Cooke’s not a blues singer, but his sheer influence on the blues genre makes him an important inclusion. You’d have no Long John Baldry, no Rod Stewart without Sam, and Rod is still championing him now, all these years later.

“With Sam, the moment he starts singing, the moment he even takes a breath before he starts singing, you know it’s Sam Cooke. His voice is that distinctive and it’s smooth and sophisticated, and yet it carries immense feeling, and what is blues but expressing feeling? He comes from that gospel background, so he’s deeply soulful and just singing daily in churches under – no doubt – a strict taskmaster with great peers, it just sets him apart. He was also one of the first to cross over into the mainstream, to go from church singing to secular singing and that was a really brave thing to do, because no one in the church encouraged that, and he paved the way for others to follow.”

The late Gallagher never did anything by halves. As a graduate from the fullthrottle “take no prisoners” school of rock singing, Gallagher used his whiskey-soaked voice to full effect both in the studio and on the road, winning over blues and rock audiences alike. He might not have had the range or technique of contemporaries like Paul Rodgers, but Gallagher always sang from the heart, particularly on early hits like Tattoo’d Lady and Cradle Rock. His presence can still be felt in modern rock acts.

One of the first things John Belushi said, upon meeting Dan Aykroyd in 1973, was: “I don’t listen to much blues.” But within a year, Belushi was a convert, and by January 1976, the double-act launched The Blues Brothers as a sketch on Saturday Night Live.

In 1980 came the film that is their great legacy. Belushi was a seriously dynamic singer, from his harsh Messin’ With The Kid to the chart-straddling version of Gimme Some Lovin’. Aykroyd said: “He was just one of those great charismatics who turned heads and dominated a room.”

John William “Long John” Baldry was a 6ft 7in mover and shaker who helped ignite the British blues boom in the early 1960s. A pal of The Beatles, Stones, Jack Bruce and others, Baldry was the vocalist on the first British blues album, R&B From The Marquee by Alexis Korner’s Blues Incorporated.

81) Dani Wilde: Wilde about the girl with the golden voice

The Brighton-based singer first burst on to the scene a few years ago, as one of a new generation of guitarists, but it’s her powerful voice that sets her apart from the rest of the crowd. With influences as diverse as Bonnie Raitt, Patsy Cline and Bobby ‘Blue’ Bland, Wilde is well-versed in all aspects of the blues.

She was influenced by heavyweights from Janis Joplin to Tom Waits, and when this gunslinger first opened her mouth on White Sugar, her voice had instant gravitas. Here was a fathoms-deep vocal that could distil whiskey at 50 paces, making you believe every word of love-gone-bad songs such as Almost Always Never and Lose Myself To Loving You. A typical Brummie, Taylor doesn’t make much of a fuss about the process. “I just open my mouth,” she shrugs, “and hope for the best.”