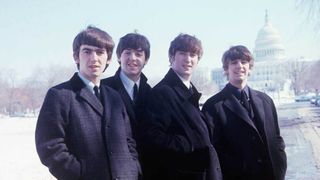 You almost feel winded by the pace and scale of it. One minute the Beatles are entertaining a small, steaming throng in the Cavern Club; the next a camera pans across Anfield stadium as a packed Liverpool crowd sings She Loves You. By 1964, the press are referring to “situations of pure havoc”.

A welcoming party of 250,000 people line the streets in Australia. The band have an entire floor at the New York Plaza but end up locking themselves in the bathroom for some peace and quiet. They have no choice but to play giant baseball venues as it wouldn’t be safe to be anywhere smaller and risk 50,000 ticketless people “going crazy outside”. Shrieking girls tell news cameras that George Harrison has “sexy eyelashes” as 240 fans are stretchered from one of their concerts in America. And just to pile on the pressure, the media keep wondering “when the bubble is going to burst”.

But the main delight of this hectic, joyous and gloriously entertaining documentary is that you get a sense of life on the inside during the super-charged years the Beatles toured the world. Paul McCartney thinks of the band as “one person, the four-headed monster”, the tightest, most enviable gang imaginable whose sparkling wit and self-belief shield them from the farcical nature of the surrounding circus.

They laugh at the absurdity of everything. They arrive onstage one night to find the drums pointing in the wrong direction. We hear the sound at their colossal Shea Stadium show as the audience heard it, through the tinniest of tannoy systems like “a giant transistor radio”. Asked at a press conference why their music excited people, Lennon said, “if we knew we’d form another group and be managers”.

At various points besotted fans who grew up with the Beatles offer their memories, Sigourney Weaver, Elvis Costello, Whoopi Goldberg and Eddie Izzard among them (Richard Curtis claims he tries to match the hilarity of the band’s dialogue in his film scripts). And the live footage is riveting: you get several songs in their entirety, the thundering rhythm section and the exchange of exuberant looks giving an idea of how it feels to be centre-stage.

By the time the Beatles reach the Philippines and Japan in 1966, the joy of live performance is evaporating. They’ve had to grow up artificially fast “like rhubarb in a hothouse,” as Harrison puts it, and their public exposure now feels like a freak show. “Every time a firecracker went off you’d think one of the others had been shot,” he reflects. There’s a fascinating sequence full of outtakes where they return to the sanctuary of the studio to make Revolver and Sgt Pepper, revelling in the freedom of having retired from the road where they were lords of all they surveyed but imprisoned by their own celebrity.

“How do you feel?” they were asked as they as wound up what became their final tour. In truth they felt knackered and disillusioned.

Eight Days A Week is a labour of love, so fond, fast and captivating it would convert a non-believer: unmissable.

The Beatles: Eight Days a Week - The Touring Years is being shown in UK cinemas from September 15. Find a screening.