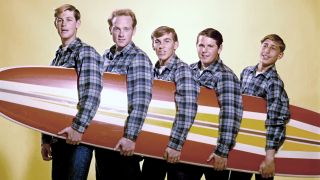 Most bands create an image. Some even manage to invent a sound or embody an era. But few can lay claim to seeding an entire myth. One of the latter is The Beach Boys, whose songs became the ultimate West Coast fantasy, creating a bronzed utopia where sun, surf and young love stretched out on the promise of an endless summer. The irresistible harmony-pop of Surfin’ USA, Fun Fun Fun, I Get Around and California Girls made them international superstars by the time they were barely into their 20s. But beneath the carefree exterior, things weren’t nearly so idyllic.

The Beach Boys actually came from the bland inland suburb of Hawthorne. Only one of them surfed. Centred on siblings Carl, Dennis and Brian Wilson, they were managed by their overbearing father Murry, whose tyranny involved psychological and physical abuse. Cousin Mike Love and friend Al Jardine completed the classic line-up, which began scoring hits in 1963.

Within three years, songwriter Brian had emerged as the only credible competition to John Lennon and Paul McCartney. He upped the stakes in 1966 with Pet Sounds, a concept suite whose depth and complexity were unheard of in the realm of pop. It was, he explained, an attempt to devise “the greatest rock album ever made”.

However, Wilson’s perfectionism was being undermined by an increasing reliance on marijuana and LSD. His behaviour became more erratic and self-destructive, which ultimately led to the failure of his next proposed masterwork, Smile. The project became the most celebrated unreleased album in history before Wilson revisited it nearly 40 years later. Consolation arrived when one of its prime cuts, the sumptuous Good Vibrations, topped the US and UK charts.

The collapse of Smile marked Wilson’s decline as a creative force. Beset by drug addiction and mental illness, he fell into a psychic malaise that only started to dissipate in the 90s. The rest of The Beach Boys duly stepped up as songwriters. And though the band were never able to shake their image as clean-livin’ surf dudes, some of their best music can be found on the experimental albums they made up to 1971, when they began to explore avant-rock and beardy psychedelia.

“We wanted to bring some love to the world,” Brian once said of The Beach Boys’ MO. “I thought we were good at doing that.”

An embittered Mike Love dismissed it as “Brian’s ego music”, but Pet Sounds remains the high-water mark of Wilson’s 60s vision. Conceived as his answer to The Beatles’ Rubber Soul, it brought another dimension to the idea of sophisticated psych-pop. Organs, harpsichords, flutes and theremins are folded into the mix, while the harmonies sound like they could’ve been fashioned by some heavenly choir. Wilson’s arrangements are given added depth by lyricist Tony Asher, especially on Caroline No, I Just Wasn’t Made For These Times and God Only Knows. The impact was enough to fire up the Fabs, who used it as a blueprint for Sgt. Pepper’s Lonely Hearts Club Band.View Deal

Long weary of the surf ’n’sun schtick that made their reputation, by 1971 the Beach Boys had immersed themselves in the counterculture. New manager Jack Rieley, a former DJ, insisted that Brian Wilson finish one of his abandoned treasures from Smile.

The result, heightened by mystical lyrics from Van Dyke Parks, was the gloriously baroque title track to their 17th album. Wilson’s other great offering was ’Til I Die, a hymnal beauty whose downbeat nature suggested that he was fast becoming the lost boy of 60s pop. Elsewhere there are eco songs, protest rock and, most impressively, Bruce Johnston’s achingly nostalgic Disney Girls (1957).View Deal

By late ’64, relentless gigs and the insatiable demand for new product were taking a toll on Brian Wilson. He’d started using marijuana, initially to combat stress, and the following year he told the other Beach Boys he no longer wanted to tour. Pouring his energies into the studio, his songwriting deepened. There were still ecstatic teen anthems (Help Me Rhonda, Do You Wanna Dance?), but songs about cars and surf were now replaced by complex, reflective ballads that mapped the trials of the heart. Session men the Wrecking Crew were brought in to add an extra slick of polish.View Deal

Few would have put money on Dennis Wilson being the first Beach Boy to have a solo album. The 60s presented him as the happy-go-lucky drummer, a free spirit living hard and loose. But come the following decade, just as the fast times were taking their toll, he began to emerge as a sensitive songwriter. Much of the metaphysical beauty of Pacific Ocean Blue lay in the contrast between the lush, crafted arrangements and the cracked ache of his voice. The tunes themselves portray him as a lost romantic, especially You And I and the enthralling River Song.View Deal

Salvaged from an album that Reprise nixed due to a lack of obvious singles, Sunflower is one of the most underrated records in the Beach Boys canon. Smiley Smile out-take Cool Cool Water is up there with the best of the Wilson-Love compositions, as is the vibrant single Add Some Music To Your Day. Perhaps most striking was the emergence of other band members, most notably Dennis Wilson, as more than capable songwriters on their own terms. The lush dynamics of Slip On Through is a case in point, as is It’s About Time. Alas, the buying public stayed away, and Sunflower became the worst-selling album of their career thus far.View Deal

Brian Wilson’s answer to the commercial failure of Pet Sounds in 1966 was to create a studio masterpiece billed as a “teenage symphony to God”. The venture finally collapsed under the weight of his own perfectionism and excessive drug use, though remnants of Smile cropped up on stray Beach Boys albums over the next decade.

It wasn’t until 2004 that he revisited the project for Brian Wilson Presents Smile, though the full picture is best appreciated on the comprehensive The Smile Sessions, which is as near as dammit to its inventor’s original sequence, with fascinating extras.View Deal

Released within months of Smiley Smile (patched together from the aborted Smile sessions), Wild Honey was no less baffling for critics and public alike. Brian Wilson has said that the band “consciously made a simpler album, just a little R&B and soul”. As such, it’s a back-to-roots beauty that’s wonderfully carefree in tone, evinced by Carl’s ecstatic lead vocal on the title track and the flutter of Country Air. Another highlight is the Motown-like Darlin’, originally written by Brian in 1963 as Thinkin’ ’Bout You Baby, but reworked for Danny Hutton, soon to form Three Dog Night. After the intense frustration of Smile, Carl cited Wild Honey as “music for Brian to cool out by”.View Deal

Uprooting to the Netherlands may have seemed like a curious move, but the Beach Boys’ manager hoped it might provide renewed inspiration and also coax Brian out of his creative funk. But it only made them all homesick.

Cue the ambitious three-part song cycle California, which seemed like an indulgent relic from the hippie era. Meanwhile, Brian’s epic modern fairy tale Mount Vernon And Fairway (tacked on as a bonus EP) revealed his less than harmonious relationship with Mike Love. When the record label refused to release Holland, Brian set about finishing Sail On Sailor, a prize tune he’d co-written with Ray Kennedy, which became the album’s opening track.View Deal

Easily their best post-Holland release, this is a Brian Wilson solo album in all but name. Its creator, who co-wrote some of the songs with controversial psychologist Eugene Landy, the man who’d helped him overcome his addictions, has even called it his favourite Beach Boys record.

Some of it skitters between throwaway and absurd – namely Ding Dang (with Roger McGuinn) and Let’s Put Our Hearts Together (a duet with his wife Marilyn) – but its simplicity and ebullience more than compensate. Johnny Carson is terrific. Brian’s new love of synthesisers gave Love You its prevailing mood, with I Wanna Pick You Up and The Night Was So Young as standouts.View Deal