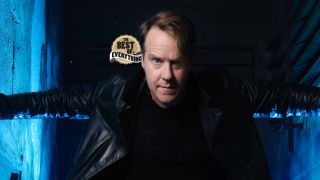 The Los Angeles industrial metal outfit have reworked songs by Head Of David, Nirvana, U2 and Killing Joke. His numerous side-projects have also tackled classics by the likes of Simon & Garfunkel and The Cult.

The vocalist seems the perfect candidate, then, to draw up a list of the greatest cover versions. But he responded with twice that, claiming that 10 was not enough. It’s his list, after all.

ZEN GUERILLA – Moonage Daydream (Originally by David Bowie)
“Let’s start with Zen Guerilla, who were on Jello Biafra’s Alternative Tentacles label. The song is a cover of David Bowie’s Moonage Daydream – but their version is the one I would rather listen to. It’s rocking and psychedelic, and they took it over the top. It’s full on power, and it’s smoking raw.”

THE DANDY WARHOLS – Hells Bells (Originally by AC/DC)
“The AC/DC Hells Bells is obviously solid, bluesy rock. But The Dandy Warhols took it, slowed it down, and turned it into shoegazer dirge. I love the original, but I put this one on, chill out and just think, ‘Oh my god!’ It has a shoegaze power that I never even knew existed.”

KARMA TO BURN – 24 Hours (Originally by Joy Division)
“The final moments of 24 Hours might be the most epic rocking ending to a song, ever. I get chills up my spine just thinking about it. They absolutely made it theirs.”

STEEL POLE BATHTUB – Just What I Needed (Originally by The Cars)
“Steel Pole Bathtub totally break down and simplify the The Cars’ new wave sound into an assimilation of noise, with this monotone beat driving it forward. When I first heard it I was like, “Wait, I know this song.’ Then the chorus kicks in and I was like, ‘Holy shit!’ They deconstructed it and made it their own; it’s heavy, but it’s so perfectly well done.”

CITY OF FIRE – Rain (Originally by The Cult)
“When I cover songs, I like to reinterpret the original and do it the way I hear it in my head. When we sat down to do this, I said, ‘This is what I hear’. I think we really captured it. We took a beautiful song by The Cult, and made it our own.”

FUDGE TUNNEL – Sunshine of Your Love (Originally by Cream)
“This was on their first Earache album Hate Songs in E Minor, and it’s a rocking song. To me, they were like the perfect grunge band. Seattle put a little more punk into it, but I think Fudge Tunnel were one of the forgotten bands from that era. They took this song, and made this grungey dirge out of it that’s just fucking smoking.”

NICK CAVE & THE BAD SEEDS – All Tomorrow’s Parties (Originally by The Velvet Underground)
“I’m a big Nick Cave fan, and this was off his album Kicking Against the Pricks, which was an album of covers. I love the whole album, but this is my favourite cover because he took a Velvet Underground song and gave it the sonic power that was lacking. He raised it up vocally, and turned it into this really driving song.”

**BIG BLACK – The Model **(Originally by Kraftwerk)
“As if a Kraftwerk song couldn’t be deconstructed any more, Big Black went and deconstructed it even further. It’s a fucking great song, and they rocked it out.”

**TRICKY – Black Steel **(Originally by Public Enemy)
“This is a Public Enemy song, and Tricky mixes it up by having a female sing it, and they kicked it up a notch to become this pure song of protest. You can feel the unrest in her voice.”

THE MISSION – Like A Hurricane (Originally by Neil Young)
“The Mission are one of my favourite bands from the late 80s, early 90s era. This is off their First Chapter compilation album, which had a few covers on it. I like Wayne Hussey’s voice on this song more than Neil Young. I think The Mission made it a little more powerful, and to me, just better.”

ASCENSION OF THE WATCHERS – Sounds of Silence (Originally by Simon & Garfunkel)
“Time for another little bit of self-indulgence here. This was my band with John Bechdel. I had the 45 single version of the original, and for shits and giggles, I played it at 33 speed. Then it became the heaviest goth song I’d ever heard. It maintained the tempo and the vocal harmony, and it didn’t sound out of tune – it sounded great. So we did it at that speed in the cover, put more of a rock beat to it, and I got my twin brother to sing harmony with me. Al Jourgensen produced the song, and he played laptop steel guitar on it too. If you haven’t heard it, you should definitely check it out.”

JOHNNY CASH – Hurt (Originally by Nine Inch Nails)
“For me, Johnny Cash made this his song. Country artists are always covering songs, but they’re usually originally by other country artists. I thought it was rather genius that he decided to cover contemporary artists from different genres. He took an already dark song, and put his heart and soul into making it even darker. And he lived every moment of those lyrics firsthand, tenfold. He knew exactly what he was singing about. The video is heart wrenching.”

WOVENHAND – Ain’t No Sunshine (Originally by Bill Withers)
“Wovenhand is the guy from 16 Horsepower [David Eugene Edwards]. His cover of Ain’t No Sunshine starts off very artsy, like you’re watching some movie, and then all of a sudden this evil banjo comes in and you can really feel the pain in his voice about the fact that she isn’t coming back. I love his version.”

**LORDS OF THE NEW CHURCH – Live for Today **(Originally by The Grass Roots)
“Stiv Bators [vocalist in LOTNC and The Dead Boys] rocked this one up, man. He did a really great version of it. I think it’s one of the highlights of his career.”

FEAR FACTORY – Dog Day Sunrise (Originally by Head of David)
“I’ve gotta put it in. I think we did a great version of it. It’s a cool song to begin with, with production from Steve Albini and the performance was really raw, too. We put an organ in the mix and gave it a little more production value, and we made that song our own.”

**CURRENT 93 – St Peter’s Keys All Bloody **(Originally by Simon & Garfunkel)
“This is the original mash-up of Sounds of Silence and Scarborough Fair. It’s probably the most evil, scary song I’ve ever heard in my life, and there’s two different vocalists interweaving these two different songs. It’s evil as hell. Pure evil. And it preceded DJ mash-ups by about three decades. I’d never heard anything that cool or creative before.”

MINISTRY – Lay Lady Lay (Originally by Bob Dylan)
“The original is cool and mellow, and it sounds like Bob Dylan singing in bed. But Al [Jourgensen] took it and made it sonically perfect. He turned it into a cool contemporary song. It was definitely the highlight of the Filth Pig album. He told me the story about why he wanted to cover it as well, and that made me love the song even more. He was in a taxi in London coming down from something, and the driver had the original song on the radio. He was just there cruising along, and it came to him in a vision. So they did it.”

THE YOUNG GODS – Mackie Messer (Originally by Bobby Darin)
“The Young Gods doing Mackie Messer, also known as Mack the Knife. It’s off The Young Gods Play Kurt Weill. First of all, The Young Gods are just geniuses. This record came out in 1991, and it preceded a lot of post-industrial bands. It’s also a song that loads of artists have covered, but to me this is by far my favourite, because it’s just so different and originally done. They’re a great band.”

ARADO – Space Truckin’ (Originally by Deep Purple)
“John Bechdel, who was in the …Watchers with me, as well as Ministry, Prong and Fear Factory for a while, had a project with his buddy Steve Howard. The band was called Arado. They did a version of Space Truckin’ that’s so amazing, you’ve gotta check it out. Deep Purple are cool, but they turned the song into this electro tune with a vocoder on it, and it rules. It’s a really cool version, and they totally made it their own.”