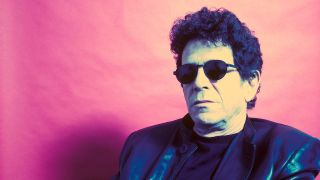 Lou Reed famously changed his mind, frequently, regarding which of his songs he liked and which he loathed. Getting mildly annoyed with me in 2004, as he tended to do – and not, in fairness, with me alone – he told me, “Follow the dotted line. Look, put all the songs together and it’s certainly an autobiography. It’s just not necessarily mine. I write about other people, tell stories, always did.

After the dissolution of The Velvet Underground, Reed's body of work grew from uncertain beginnings through a prolific and wildly diverse 70s surge – for this writer, his golden age – and on to a late 80s revival of inspiration.

There were many turkeys along the way, as well as many triumphs. We can’t squeeze everything into this operation, so while each have their advocates, there’s nothing from those fire-starters Metal Machine Music or Lulu. There’s no The Original Wrapper. And technically Sweet Jane was a Velvets song, before you start.

Mercurial, contradictory, vaulting from throwaway garage-candy to high art concepts and back again, Lou Reed’s enthralling, provocative solo catalogue remains, six years after his death – Oct 27, 2013 – aged 71, as fascinating, frustrating and full-on as the man himself.

Lou’s Magic And Loss album, which he compared to Beethoven’s Fifth, was a set of buttoned-up ponderings on cancer and death which came dressed as Lofty Art: audiences who came to see him play it were barred from drinking or talking. Some believed his hype: weirdly it’s his highest-charting UK album (no.6). But it was no Berlin, bar this slow-burn finale about passing through fire.

“When I was thirty my attitude was bad”. Yes, and your records were good. Mistrial is, apart from the hilarious The Original Wrapper, the sound of a forty-something man yelling at the telly from the sofa (Video Violence), and even Reed later bemoaned the production. This closing curveball, where Lou mistakes a film set for a UFO, carried a sly hint of the ghost of Transformer.

After a run of painfully worthy, hark-at-me I’m-so-profound albums, it was a relief and release to hear Lou crank up the guitars again, even if it meant his interviews became yawnsome drones about amplifiers and studio technology. It’s full of clumsy poetry, but this attempt to echo Dylan Thomas’ “Do not go gentle” does climax with a flare of the old heat.

The Blue Mask marked a new chapter, with a new, often loud guitar band. But its best moments involve restrained musical subtlety. Stand-out The Gun has that, but also has Reed’s sinister, deadpan narration covering violence, intimidation, home invasion, possibly rape. It’s genuinely scary, reminding us that Reed had the genius to make a track haunt your psyche.

Transformer’s nursery rhymes from Purgatory made Lou a strange kind of pop star, and its opening simple-but-great guitar riff set free his new persona. With lines inspired by Warhol ('hit me with a flower') and Mick Ronson restraining himself until the fade, it’s a great “hate song” despite David Bowie’s production leaking much of its power.

On the witty, intricately arranged Growing Up In Public, Reed takes one last long hard look at his various personalities before hitting forty. 'I’m so damned sane', he said. This pomp-rock opener, all piano pirouettes and dovetailed dynamics, a capella blurts and handclaps, borders on Queen. Lou gives it conviction, asking how he’s supposed to talk to pretty girls when his father was “weak” and “simpering”.

Warhol died, Nico died, but Reed somehow pulled himself out of the creative doldrums to deliver his most acclaimed album in many years, New York: so good he named it once. Its “fierce poetic journalism” (Rolling Stone) now called out, instead of wallowing in, urban squalor. Here he chronicles the decaying ideals of his beloved city as it sinks and burns like the fall of Rome.

It’s emblematic of Reed’s career that as many fans think Coney Island Baby is a flaccid filler as rate it as one of his strongest. Following Metal Machine Music with a tender, vulnerable pastiche of soul and doo-wop had everyone confused. Yet its mellow mood is broken by the incongruous, visceral fusion of words, music, muttering voices and jolting sounds which constitute Kicks. It’s as if Reed’s dark side is banging on the closet door, demanding to be let out. Sex, blood and adrenalin: it’s intense.

Reed claimed to hate Sally Can’t Dance (his only US top ten album), but it’s rich with wry asides. Ennui, all but hidden away, is one of his frequent accidental not-trying-too-hard flashes of genius. It floats on a sullen mood, his voice so low it rumbles as he, cynical but arch, advises, 'Pick up the pieces of your life/maybe someday you’ll have a wife'. Then he adds, 'And alimony'. That punchline’s so unexpected that you laugh as you reel. “It’s the track most people skip, I guess”, said Lou. “It must be; it’s the one I like”.

“If you can’t play rock and you can’t play jazz”, declared Lou, “put the two together and you’ve really got something”. The Bells is a bizarre, bipolar mix of experiments in binaural sound and so-dumb-it’s-smart pop, as if he’d noticed Bowie’s Berlin wall-demolishing and fancied some of that. Hated by punk purists at the time, “proof” to them that Reed had “lost it”, Disco Mystic is white funk if you ran it through a photocopier fifty times then drained its blood then got an inauthenticity expert to triple-check it was fully inauthentic. Pastiche? Homage? It’s stupidly, brilliantly funky.