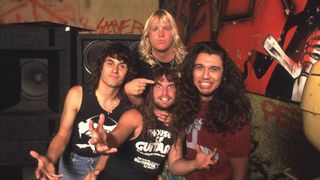 It used to be easy. Ever so easy. There was heavy. And there was metal. But then something began stirring in San Francisco at the beginning of the 1980s. And no, it wasn’t Metallica’s James Hetfield twirling a teaspoon, trying to get his artificial sweetener to dissolve in a mug of lapsang souchong. That would come much later. What essentially happened was that some spotty, basement-dwelling oiks who rarely ventured out into the West Coast sunshine began getting inspired by rapid-fire mid-70s punk ethics, along with late-70s New Wave Of British Heavy Metal aggression.

These kids were dorky, disaffected and rancid looking; they held no truck with overblown US acts such as Kiss and Aerosmith; and they couldn’t quite decide whether their starter-for-10 on University Challenge would be on the subject of Satan, suicide or stage-diving. The scene was set for the birth of thrash metal: extreme noise terror, five years before the band of that same name would begin playing thrashcore (the inevitable marriage of thrash and hardcore) in the rather less exotic location of Ipswich.

But that’s another story. Thrash metal doesn’t really need explaining. The secret is in the first word of the term. And if you’re dumb enough not to know exactly what ‘thrash’ means, here’s a handful of dictionary definitions to assist: Beat severely, esp. with stick or whip… Defeat thoroughly in a contest… Act like a flail… Deliver repeated blows… Move or fling the limbs about violently or in a panic… Got the moshin’ message? Never was a style of music more aptly named. The genesis came when a fledgling Metallica – at this time still based in Norvale, California – made a demo, No Life ’Til Leather, in ’81. This was thrash at its most formative, and the band’s scabby cassette even had a pre-Dave Mustaine chap called Lloyd Grand on guitar. But the tape came at the right moment.

These were stodgy times for heavy metal in the States. Metallica’s live-wire tactics jolted a mordant scene back to life like an adrenalin-filled medieval cake-icing implement plunged straight into the heart. One single jolt was enough. Frisco duly exploded with a livid rash of raw young thrash acts. Before long the creeping death had extended countrywide, right across the US. Then the disease spread to Europe and, most notably, to Germany. But the UK, which was still in the grip of the NWOBHM, lagged behind. Surprisingly, we never spawned an act capable of competing with the American, Teutonic and, yes, Brazilian thrash masters.

Incredibly, Slayer were something of a joke before Reign In Blood. Admittedly, the depraved Hell Awaits (’85) had the cognoscenti raising their coffin lids in curiosity. But it took Reign… to perform a full-blown exhumation. This isn’t just a superb thrash record, it’s one of the greatest metal releases ever. Period. Producer Rick Rubin finessed Slayer into seriously warped gore-hounds. The album, which kicks off with the molten Angel Of Death, lasts for only about 25 minutes. But imagine standing for that length of time beneath a windfarm generator, and having your skull cleaved repeatedly by its whirling propellers. Such is the impact of Reign In Blood.

1983 Metallica started off young, dumb and full of Absolut vodka. But they quickly outgrew their ‘Alcoholica’ nickname, denounced the thrash movement and distanced themselves from their peers. Nevertheless, debut album Kill ’Em All still sounds raw and rampant. The guitars rattle like Gatling guns, but there are also all-important songs as NWOBHM influences are brought to bear. The track titles remain achingly familiar: Seek & Destroy, Phantom Lord, Whiplash… and, of course, there’s the stunning showcase for late bassist Cliff Burton, Anasthesia (Pulling Teeth). This is as far away from St Anger as the Earth is from Pluto.

Megadeth were the first act to take the essential ingredients of thrash – volume, attitude, brutality – and streamline them with shred-like soloing. Dave Mustaine’s fancy guitar brought hitherto uncharted musicality to the genre, and his highbrow lyrics had noise-hungry Neanderthals scratching their heads in bewilderment. But the seething indignation and leg-breaking intent that crackled through Wake Up Dead and Black Friday, plus the songs’ convoluted structure, made people realise this thrash thing wasn’t simply about grunting and murder. Never was Mustaine’s fuck-you-Metallica message put so eloquently.

Years before they pioneered rap metal with I’m The Man and Bring The Noise, Anthrax were battling with Testament for a spot in the thrash top three dominated by Metallica, Slayer and Megadeth. Shrill singer Joey Belladonna (who succeeded Neil Turbin) was too traditional a frontman for some, but what set Anthrax apart was a dark sense of humour. (It was truly evident on side projects, SOD and MOD.) Spreading…, the band’s third album, recalls a light-hearted Metallica and is fuelled by Scott Ian’s chunking guitar playing. Anthrax set out their stall on debut Fistful Of Metal with the song Metal Thrashing Mad. Spreading… delivers the Aftershock.

Testament began life as Legacy with vocalist Steve ‘Zetro’ Sousa (later of Exodus). Lumbering frontman Chuck Billy joined for this first album, whose title paid homage to the band’s, er, legacy. Testament also gained a new guitarist (Alex Skolnick) and the results were spectacular. The band were more adept than many of their rivals. Twin-guitar harmonies and melodic intros dragged you out of the pit and gave you a hose-down. Then tracks like COTLOD (Curse Of The Legions Of Death, natch) threw you back into the flailing bodies again. Billy was the first thrash throat with the skill to switch seamlessly from shouting to singing, and back again.

Even though their singer laboured under the namby-pamby moniker of Don Doty, Dark Angel were immense. Some might quibble at our rating of the band’s semi-obscure Darkness Descends, but in the language of the time we can only retort: FOAD. Produced by Randy Burns (Nuclear Assault) and stoked by bulldozing drummer Gene Hoglan, Dark Angel never matched the glories of this, their second album. Every song is an evil riff-monger, as you would expect with names like Hunger Of The Undead and The Burning Of Sodom. Meanwhile, if neck-shivering nihilism is your bag, then Death Is Certain (Life Is Not) is the track on the rack.

Kirk Hammett was in an early version of this band’s line-up. Hammett was poached by Metallica to replace Dave Mustaine, and Exodus drafted in replacement guitarist, Rick Hunolt. But by the time Bonded… came out, Metallica were poised to deliver their breakthrough Master Of Puppets; Exodus had become just another snarling band in a burgeoning scene. That said, this is still full of pummelling power, and A Lesson In Violence is just that: a tutorial in bloody ferocity. Vocalist Paul Baloff (who died in ’02) quit after this, to be replaced by Steve ‘Zetro’ Sousa. Baloff rejoined in the late 90s, but it was too late. Time had again passed Exodus by.

Sepultura - Beneath The Remains (Roadrunner, 1989)

Brazil’s Sepultura were more of a death metal outfit on their initial releases. But by the time …Remains came around the band had refined their sound, replacing studied morbidity with superhuman intensity. This is a marvellous record, up there with the best of Slayer. It’s a triumph of lacerating technicality, with high-speed grinding riffs and a sludgy industrial undercurrent. You know exactly what you’re getting on Lobotomy with its chant of ‘Brain killing brain!’ while Inner Self (‘Walking these dirty streets/With hate in my mind’) is a chilling tale of life in a third-world country. The last great thrash album of the 80s. Stronger Than Hate, indeed.

We saw Destruction support Motörhead one time. Lemmy & co had an off-night and the German band took full advantage, reducing them to the level of a geriatric string quartet. Spearheaded by charismatic bassist/vocalist Schmier, Destruction showed that even if the local take on traditional heavy metal was clueless (yes, we’re talking to you, Running Wild), by contrast Deutschlanders were born to distort. Destruction struck just the right chord on Life Without Sense, which bristles with breathless hate and power. Curse The Gods is equally mind-numbing. If you can’t bear an entire album, the Mad Butcher EP (’87) should do nicely.

Possessed bestrode both the thrash and death metal genres like a terrifying Satanic colossus, and their Seven Churches album features such sordid family favourites such as Exorcist, Pentagram, Burning In Hell and Satan’s Curse. Follow-up album Beyond The Gates wasn’t nearly as good, and by the time the band turned to Joe Satriani to produce their third release, The Eyes Of Horror, things were clearly headed in a downwards spiral. Guitarist Larry LaLonde later found fame and fortune in Primus.