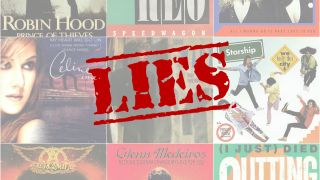 We’ve all been socked in the feelings by a good power ballad, haven’t we? But guess what?

It turns out those beautiful, often fluffy declarations of love and longing are nothing more than planned-out attacks of bombastic trickery.

“I will be right here waiting for you” – Richard Marx

Lie. I arrived home this evening, expecting to find Richard Marx right here waiting for me but there was no-one around. Disappointing.

“Everything I do, I do it for you” – Bryan Adams

Lie. I once caught Bryan Adams doing something for someone else. He was helping a lady to carry her shopping. This was in direct contravention of the promise he made to me via this power ballad in 1991. Upsetting.

Lie. They wanted to do lots of things. Once, they wanted to go for a walk. Another time, they wanted to bake a sponge cake. There was also an evening where they wanted to watch back-to-back episodes of Twin Peaks. They were not as single-minded about making love to me as their power ballad implied. Misleading.

“I just died in your arms tonight” – Cutting Crew

Lie. Clumsy attempt to get me charged with the murder of Cutting Crew. Several alibis can attest to the fact that I was nowhere near the scene. Disgraceful.

“I can fly higher than an eagle” – Bette Midler

Lie. I’m not even going to dignify this one with a scientific experiment. Just an outrageous lie, Bette. Can’t believe you thought I’d fall for that. Egregious.

“My heart will go on” – Celine Dion

Lie. Celine Dion’s heart will not go on. It will one day stop beating. She is not immortal and it was wrong of her to claim otherwise. Deceptive.

Lie. Aerosmith were perfectly happy to miss my one-man improv show in 2007. I sent them an invitation and everything. The highlight was when I acted out what it would be like to be accidentally trapped in a bakery after closing time. The audience loved it. Not that Aerosmith care. Despicable.

“We built this city on rock and roll” – Starship

Lie. Architecturally, rock and roll is amongst the worst possible foundations for a city. I’ve done some research into Starship and it turns out that not one band member has any experience in city planning. The idea that they built an entire city on such unsolid infrastructure is fanciful at best. Untrustworthy.

“I can’t fight this feeling any longer” – REO Speedwagon

Lie. Can’t or won’t? Put it back in your pants, REO Speedwagon. You disgust me. Monstrous.

“Nothing’s gonna change my love for you” – Glenn Medeiros

Lie. For all his claims, Glenn’s love for me changed noticeably after I borrowed his credit card without asking, crashed his car, tried to hit on his mother, framed him for a crime he didn’t commit and accidentally killed his pet goldfish Fishstick Medeiros. Not a man of his word. Unreliable.