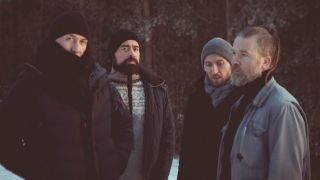 “I’d like to pick a band which I think has really challenged the conventional frameworks of the genre throughout their career,” says The Soundbyte’s guitarist Trond Engum, when asked about ideas for this year. After thinking for some time, he chooses Norway’s ambient experimentalists Ulver, a band that he shared distribution with in the late ‘90s.

“During my time in The 3rd and The Mortal I was given a copy of their Blood Inside album from the record company when it was first released in 2005,” he says. “I’ve revisited their music a lot since then and putting together this list was a great opportunity to delve even deeper into their back catalogue. While they started as a metal band it was their constant experimentation with music over the course of time that I admired the most, along with the way they challenged genre conventions and explored the use of technology.”

And with that exploration and expansion in mind, let’s take a look at the mind-warping music from Ulver, as seen through The Soundbyte’s eyes.

I find their collaboration with Sunn O))) on 2014’s Terrestrials to be really fruitful and would recommend people be patient and listen attentively. Dwelling guitars and solo strings performing small melodies; it’s complex and simple at the same time but cleverly provides a sort of ‘organic carpet’ underneath everything. While it develops slowly, it has these interesting complex sonic structures in place of tonal and rhythmic variations.

It Is Not Sound

Just listen to that brilliant start with the abrupt feedback loop, synth choir and string samples. This is the first of three songs I’ve chosen from the album that initially turned me onto Ulver, 2005’s Blood Inside. The start gives way to a great riff and groove-based theme that completely opens up the landscape. I also really enjoy the variations in the arrangement and composition. There are no clear repetitions of the themes that are being introduced and it almost tips over into 70s prog at one point before entering back into melancholic strings.

This is just a great song and another that slowly swells from that signature synth sound, lo-fi drums and piano before generating a strong feeling that continues to build and build. Ulver are truly something else when key elements blur and the intensity grows.

This is the final track I’ve chosen from Blood Inside and it has a much more mellow approach with that xylophone-like sound accompanied by floating and unpredictable structures. It reminds me in many ways of the ‘80s Australian project Dead Can Dance. But again, sampled strings, this time to accompany the voice, never feel predictable and it’s always in one direction to the piece itself.

Now on to one of my absolute favourites and a record that sees Ulver team up with the Tromsø Chamber Orchestra. Taken from 2013’s Messe I.X-VI.X, like the majority of Ulver’s albums it’s best listened to from beginning to end, but this particular piece alone incorporates a mix between orchestral instruments and electronics seldom heard in contemporary music. Except maybe in film music. It’s beautifully arranged and paints a sweeping landscape in the eyes and ears of the listener.

Taken from their fourth EP A Quick Fix Of Melancholy and released in 2003, this track resides in darker places. I really enjoy the transparency in the instrumentation at the very beginning, that persistent drone which eventually gives way to crushing drums that lift the track up even further into a dark, yet melancholic landscape. How can anyone not enjoy this one?

Again, another track that is very reminiscent of Dead Can Dance and one that I highly recommend people check out. That filtered vocal line that comes in after a while, paired with the calm and floating melancholy of the song’s strong melodies and the introduction of an organ-like layer to really keep pace. Excellent.

I’ve included this one for a number of reasons but mainly because it’s another track that’s more of a state than a developing composition. It’s taken from last year’s ATGCLVLSSCAP album and the production is exceptional. Great guitar fills too, and I love the elements of percussion before it dips steadily into a groove.

This one can be found on 2001’s Teaching In Silence and what I like here is the soft melancholic keyboard and cymbal theme against sheer noise that is used to highlight the contrasts. It’s a sound with a lot of ring modulation and creates a sense of time that is really needed in a piece like this.

When listening through their back catalogue, this song jumped out at me because it’s clearly inspired by the trip-hop era with subtle references to the likes of Massive Attack and Portishead. It really shows the diverse influences they play around with in their music. The loop-based grooves accompanied by that floating soundscapes showcase just how well they use different technologies.

The Soundbyte’s new album Solitary IV is out now, via Temple Of Tortuous. You can watch their new video for Solitary below.

Ulver: "The idea that pop music’s easy to make is a myth"