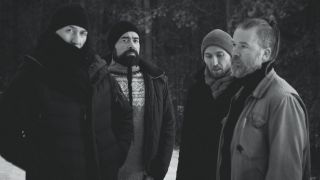 “I guess we all tipped 40!” chuckles frontman Kristoffer Rygg, explaining the timing of Ulver’s decision to release an album of exuberant, shimmering pop and dance music. Anyone with a passing awareness of the Norwegian avant-garde collective will know they’ve been blindsiding listeners with a sequence of exploratory curveballs for more than 20 years. Emerging from the black metal underground via acoustic orchestral folk, by the end of the 1990s they’d mastered electronic, ambient, trip hop and industrial forms, yet 2017 is the first time the band have fully embraced the transcendent euphoria of pure pop.

“We joke internally about that being the case; we’re old enough now, so we can make our pop album without an ounce of shame,” Kris reiterates. “We’ve flirted with themes from pop music for a long time, but obviously not in such a devout way as on this record. But I still see traces of our previous music in it, I sometimes feel that our genre-hopping gets a bit exaggerated. I guess it’s just choices we make. It’s a deliberate choice on our part, this album; maybe more so than some of the others we’ve done in recent years, which have been born in a different context and created in a different way.”

The other crucial point about Kris turning 40 in 2016 is that it means he turned seven in 1983, so the era predominantly evoked on this album is the one that formed his earliest musical memories. In the 90s, the early 80s were regarded as a laughing stock of gauche bad taste; nowadays they have a cultural currency that informs present aesthetics.

“That’s what I was trying to say; we’re old enough now for this stuff to be so far back that it takes on a romantic aspect,” Kris concurs. “Ten years ago maybe it would have just been a bit cheesy. I guess it could be called cheesy to some extent, but it’s also sincere. Things go in circles, the winds blow differently as the decades go on. All that ‘tastemaker’ stuff, the musical hierachy, it’s always there lurking, but it too changes over time. We’ve always stood on the outside of that, looking in, trying to fathom it but not always being able to, and done our thing regardless.”

The other reason The Assassination Of Julius Caesar transcends any doubts about taste and style is that it’s simply a beautifully crafted example of the form. Bringing decades of versatile creative experience to bear on the music they absorbed in early childhood, Ulver appear to have nailed 80s pop in under a year, yet there are certain essential technical stipulations and qualities that this music needs to succeed creatively.

“Definitely, especially from a production angle,” Kris affirms. “The idea that pop is simple music that’s easy to make, that’s a myth. If you toy around with forms that are more abstract and abstruse, it’s much easier to get away with things, I would argue, than if you aim to make well-produced, immediate-sounding music. I love experimental music, of course, so we’re not pitting these things against each other. They’re just very different disciplines, is all.”

The difference shows in the amount of time needed to hone the material. Whereas Ulver’s last album, 2016’s fiendishly abstruse, largely instrumental drone opus ATGCLVLSSCAP, was assembled via free improvisation in live performance, The Assassination… is the complete opposite, featuring upfront vocals, sumptuous production, tight structures, polished melodies. How long did it take to assemble?

“About a year, on and off, like five hours a day, three days a week,” replies Kris. “We usually say, amongst ourselves, that to make a good album takes a year. We spent that long making albums like Blood Inside, Shadows Of The Sun and Perdition City; they were all one-year processes. The soundtracks, EPs, more experimental stuff, we can set aside a month or two, maybe? A proper album will usually take a year, but music takes the time it takes. There is usually a consensus though, a collective vision, which comes into play quite early in any process, and which dictates how long things will take. It has to do with how long you can afford to work with something as well, naturally. We’re a project-driven entity, and quite in unison about the whys, whos and hows from early on in any process.”

The earliest stage of the creative process was writing lyrics, which here take a mischievous, lateral time-scoop approach, plucking people and places from ancient and modern history like a malfunctioning TARDIS. The album’s name suggests that these all connect to a titular event of supreme significance, but Kristoffer’s not called Trickster G for nothing.

“In reality it was the title of the first lyric that we started writing for this album, which later turned into something else,” he explains. “The album toys quite a lot with titles, words, names, people and places or references to specific events or pieces of art, in a bricolage sort of way. Anyways, it all started with this title. Not that everything has to do with this one specific incident – although it was a key event in history – of course, but it sets a tone and precedent: the fall and the rise and all the bread and circus in between.”

“It ties together with these odd pairings that we’ve been into, whether it be lyrics or images. They’re not necessarily illustrative – although they are, maybe, to us. That’s been part of the exercise. In Nemoralia, the lyric started with the myth of Artemis – who the Romans called Diana – being surprised by the hunter Actaeon when bathing naked. He got killed by his own dogs. That story weirdly resonated with the paparazzi hunting Princess Diana; for us there was an uncanny similarity between the myth and modern history. Those weird pairings of things across space and time are all over this album. Maybe these modern events, like the death of Lady Dianna, in a thousand years will be as mythical as the Artemis story?”

Perhaps the most surprising thing about The Assassination… is that, although it has what you might call an ‘Ulveric backbone’ of darkness, there is a radiant, euphoric uplift to the material that feels positively subversive, even therapeutic, in these troubled times.

“Just looking at the world last year, at how much dark shit is going on, it almost felt necessary to do something that’s ‘not really us’, this time, something a bit more elated. We’ve committed our fair share of pessimism in our history, so there was a consensus of ‘Why the hell not?’. Might as well, Rome is burning. In dark times people need to dance, they need diversion. We are no different. And even if this album is still fairly dark lyrically, there is an element of that; it’s a sort of getaway, I suppose, away from the most recent horrors in the world.”

Ulver confirmed for Be Prog! My Friend 2017