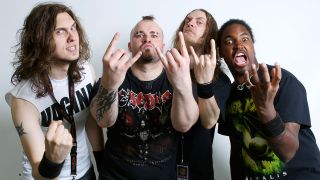 We're now at our fourth and final chapter of the Best Thrash Songs odyssey. We've charted the different eras of thrash since its birth in 1983, its heyday in 1986 and its slight decline in the '90s. Now we're here at the 21st century, when the big names are still going strong and more young blood has come up through toilet circuit, playing faster and heavier than ever before.

Destruction – The Butcher Strikes Back (All Hell Breaks Loose, 2000)

Audibly furious with themselves for wasting a decade, the reunited pioneers reclaimed territory on this wistful memoir – our first clue that the 00s heralded a new thrash Golden Age.

As soon as this explosive opener burst out of the speakers, we were all trying to wipe away tears, even as our heads were banging.

After helping Testament and Kreator renew their thrash vows, producer Andy Sneap worked his magic on Exodus's long-awaited comeback, blown up by this raging volley of anti-American attitude.

Of all the bands blackening thrash, this Oslo trio had the sleekest chops, becoming the first band to sign with Darkthrone's label, Tyrant Syndicate.

These guys stuffed a firecracker up thrash's arse in the 00s, unleashing delicious garish, frantic crossover suckerpunches, like this flailing tale of mechanised warfare.

With the return of drum god Dave Lombardo, Slayer got their edge back, as trailed on this obsessively blasphemous advance cut (release date: 6/6/6).

The Huddersfield hellions (pictured at the top) dropped jaws in 2007 with the strength and purity of this time-warped assault, upping the ante on the genre's revival.

A whirlwind of thrashy technicality, Headcrusher was the best Megadeth single to drop since the early 90s, and Endgame cemented a return to the very top of their game.

Prolific hard-workers Overkill always kept up solid form, but in 2010 few expected anything as resoundingly powerful as this rugged, gleaming thrash masterclass.

After decades away from thrash, the men who kicked it off are napping necks again on this righteous riff labyrinth, closing their latest LP with spirited momentum.