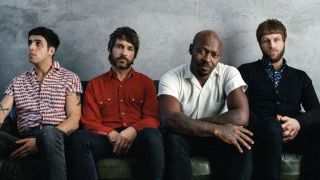 The Heavy may not be a name you're immediately familiar with, but chances are their work is something you're already acquainted with. Having netted spots on the soundtracks of a number of films (Dallas Buyers Club, The Hateful Eight, The Big Short), TV series (Entourage, True Blood, Suits), and even a Presidential election (they're quick to point out it was Obama, not Trump), the British blues-rockers have become one of the most heavily-featured bands on TV and film in recent years. Their streaming figures typically hold more digits than the average phone number.

The Heavy's cinema-friendly sound makes all the more sense when you consider the impact the silver screen has had on their work as songwriters. Influenced by soundtracks and their composers, their music drips with evocative, seductive attitude as a result.

To celebrate new album Sons dropping on May 17, we sat down with The Heavy to hear their favourite soundtrack moments (and accompanying scenes) of all time.

Dan Taylor: "De Niro's entrance to the bar with a girl on each arm to Jumping Jack Flash by The Rolling Stones – I've yet to witness a cooler way introduce a character."

Kelvin Swaby: "This track highlights Horsemouth’s pride with his new motorbike and the journey he’s about to take across Jamaica, meeting a rainbow of colourful characters/legends throughout. A childhood favourite of mine."

Chris Ellul: "This piece of music by Angelo Badalamenti, The Pink Room, is for me the highlight of the series, and the movie. It’s the peak of the story, the place where everything went wrong. The drum sound, the music, the scene and the editing are all disturbing and disorientating."

Spencer Page: "The opening scene of Trainspotting was incredibly iconic and came at a great time for British cinema. Danny Boyle’s soundtrack for the whole film was so well put together and featured lots of classic artists such as Iggy Pop, Brian Eno, Blondie and Lou Reed. The song choice for that opening sequence with the chase through Edinburgh and the ‘Choose Life’ monologue was absolutely spot on. It set the tone for the whole film brilliantly."

Dan Taylor: "The wedding scene featuring Luna Mezz'o Mare sung in Italian. I'm half Italian and although I don't speak the language, this song and scene seems to resonate through my bones."

Kelvin Swaby: "The bass trombone and clattering percussion are just mean, mean, mean. Tarantino would later use film this as inspiration for Reservoir Dogs."

Dan Taylor: "I could have chosen any number of Ennio Morricone's soundtracks, but I've gone for this beautiful score. Deborah's Theme gets me every time."

Track: The Coasters - Down In Mexico

Kelvin Swaby: "That film. That 1969 Dodge Charger. That lap dance!"

Track: The Who - My Generation

Chris Ellul: "This film was my bible growing up, so I had to pick something from it."

The Heavy's new album, Sons, is out on May 17 via BMG. Check out the video for single, Better As One, below: