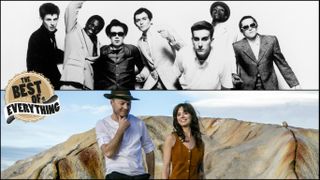 What do a dirty-blues duo from San Diego and a 2 Tone band from Coventry have in common? Decidedly little on paper, but when CC Spina and Tone Catalano joined musical forces to form Little Hurricane in 2010, it was The Specials who provided a key jumping off point for their musical exploration. When they were asked to join the band for a number of their US tours, their influence on Little Hurricane’s restless sound and ethos only deepened.

Based on the idea that humans are more alike than they are different, Little Hurricane’s new album Same Sun Same Moon spreads a message of unity in the face of growing global diversity, and an ideal that we’re all connected in one way or another. It’s an idea that borrows from the blueprint laid out by the ska legends, and their songs tackling class disparity and social inequality in broken 80s Britain.

We caught up with drummer CC Spina to get her 10 best moments from The Specials.

“A Message To You Rudy was the first introduction to The Specials for both of us. Tone first heard it on a punk covers CD he got in high school, while I first heard it as part of a Sublime song when I was maybe 13. The lyrics ‘Stop your messing around, better think of your future, time you straightened right out, or you’ll wind up in jail,’ are probably something that every teenager needs to hear at some point in their lives.”

“I love this song because it reminds me of watching [Specials’ Singer] Terry Hall perform it live. He would always have an incredibly blank expression on his face throughout the night (particularly during this track), but occasionally surprise everyone on a random night where he would run back to the green room, grab a handful of candy bars, and start throwing them at the crowd. I’ve seen him throw water bottles, raisins, fruit, or just about anything he could find. It always made for a fun night when he was in good mood.”

“Rat Race describes how I feel about most people. It’s a song that puts life into perspective: you might be getting a fancy degree or house, or your PHD, but you’re just part of the system. Most people don’t live for themselves, but to impress others or for material gains. It’s a race I never want to be a part of, and as much as I might struggle with my choice in work, I am happy to work for myself and make my own rules.”

“This song runs through my head every time we play a shitty bar. It’s so descriptive, and I am not really sure what the intention was behind the song, but it feels like a place I have been. I have thought more than once “What am I doing here?” and then the song starts playing in my head.”

“Gangsters is such a cool song with really riffy guitars. I love the story behind it, of how The Specials were on tour in France and ended up getting charged for another band’s damage to a hotel room. They also include a (not so nice) shout out to their former manager, which makes me feel better about our own struggles with managers in the past. I also find it inspiring how they turned a difficult situation that was unfair into their first hit single, and one of my favourite songs.”

“While A Message To You, Rudy was my first introduction to The Specials, Ghost Town reinvigorated my love for them in the mid-2000s. It’s still in pretty frequent rotation at a local San Diego radio station, 91X, and reminded me of how much I love this band. It’s a timeless song, and it’s great that it still receives so much love from the radio world. The melodica in the song is my favourite part, and has inspired us to use melodica in many of our songs and acoustic sessions. It’s also Tone’s favourite song of theirs.”

“This song has a powerful message of being present and not letting life pass you by. I loved watching the band perform it all together because of the group vocals. Every night I would hear it live and remind myself that no matter how hard tour can be, it’s still important to savour every moment. I think it shows its influence in tracks of ours like Isn’t It Great, where we try to convey a similar message.”

“On tour, this would be The Specials’ closing track. I have this bittersweet memory of being at The Stone Pony in New Jersey on the last night of the tour, listening to this song live with tears streaming down my face. ‘You’re wondering now, what to do, now you know this is the end.’ I didn’t want it to end! The song felt like a soundtrack to the tour, and this was the final scene. The song is has an upbeat reggae feel, but to me is so sad in its own way. It marks the end of a chapter of memories that I will cherish for a lifetime.”

“Do The Dog will forever remind me of The Specials’ drummer, John Bradbury. The song has such a distinct drum beat and is the perfect opening track to the live set. Brad was probably the most influential musician in my life. When we toured together, he always took the time to talk with me and encourage me. I’d see him some nights side stage, watching our set, and I’d always try extra hard when he was around. I loved the way he would sit at his drum throne; he had perfect posture. He would listen to a click track on headphones for hours before their set. I treasure the times I got to watch him play, and was devastated to hear he had passed. He was and will forever be my idol.”

“My number one song from The Specials is Doesn’t Make It Alright. It brings back so many memories of learning from the members. I remember Lynval [Golding, guitarist] telling me he learned to skank to avoid people throwing bottles at him on stage because they were a multiracial band. It broke my heart. He also explained to me that “We are called The Specials because we didn’t think we were special at all.” But the truth is they are so incredibly special and kind, and they have forever changed the way I look at music and the world.”

Little Hurricane’s new album, Same Sun Same Moon, was released on April 14th via Mascot Records. You can check out the video to their new single OTL below.