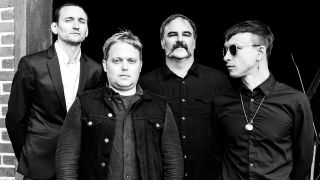 Between us, we like a lot of different music, but Daughters are right up there for all of us in Irk. They’re completely fearless – not in a ridiculous macho sense like a lot of lesser noise rock bands, but in their ability to do precisely what they want, regardless of what’s come before, or what’s expected. Without ever stepping too far from the framework of what’s recognisable as a band playing rock music, they are without limits.

With that said, this was the hardest thing we’ve ever had to do; picking 20 tracks would’ve been hard enough, but 10 was near impossible. It broke our hearts to exclude so much excellent music.

Matt: This was the first Daughters song I ever heard and it remains a favourite. An exhilarating track from start finish. The dense, layered production sees Daughters managing to 'up' the wall of noise factor, whilst making one of their finest anthems.

Ed: This is the first song that came to my mind when we were putting together this list. It’s got all the things I really dig about Daughters: frenetic guitar and drum parts, vocals that wander around the song and bass parts that punch into the mix and lock it all in. The horns that come in later in the song layer up the intensity and anxiety. Damn it’s good!

Recorded Inside A Pyramid (Hell Songs, 2006)

Jack: I think this song perfectly captures everything I love about Daughters. The threats of melody and harmony stalking the shadows of the inimitable guitar squeals and the drum patterns that sit equally barbarous and meticulous. It’s all topped off with perfectly measured ramblings that punctuate the song. Highlights include the incredibly effective instrumental drop-out when Alexis says the word “throat”, and the multiple vocals in the outro lending to the psychopathic path the track treads.

Jack: What a comeback. The war drums, the pulsing elastic bass, the air raid siren guitars, all leading into that clangourous chorus complete with what sounds like a haunted honky-tonk piano. Hearing this for the first time was exhilarating because what could be so easily understood as unexpected restraint or some kind of enforced repression, is in fact just the latest manifestation of that same intrepid self-determination that produced all the other excellent music which preceded.

Matt: This track sees Daughters giving the grindy sound from their first album a makeover, and probably pissing off a few people in the process (what, no screaming?). Wild, awesome stuff.

Matt: The end of this song is one of Daughter’s greatest moments. 'Love is a disgusting thing' is spat over and over a head spinning racket. Just when you think the track is at breaking point, it pushes you a bit further.

Matt: An early, trashy, and a slightly disturbing little number. There’s something about the wonky guitar work, nonsensical song structures and creepiness of it all that makes this track and the rest of the album really unique.

Jack: To me, this is Daughters knocking on your door and asking if you have a moment to talk about Jesus Christ. There is a polite knock in the battering drums before a short wait, measured by blinking guitar tweaks. You open the door and with sudden joy, you realise that your saviour is here. It’s easy to think of as “grind” with the manic tempo and unrelenting drums, but the ambulance-like guitar wails and meandering, drifting rhythms speak of something much less dogmatic or restricted. Let Jesus into your heart.

Ed: The Dead Singer is the song that got me into the band. How could that intro not grab your attention? The first half of the song bounces between tense riffs and crazy circus-sounding shenanigans before the middle section builds into one the heaviest moments on the album. It’s all over the place in the best possible way.

Ed: One of my favourite things about their latest album is hearing Daughters venture into more of a noise rock territory. I think this song is a great example of that with the repetitive riffs and driving rhythms. There’s all that tension they’re so good at creating bubbling away underneath it all though, and the guitar riffs sound like they’re straight out of nightmares.

Irk's debut album, Recipes From The Bible, will be released on 07 December. If you like Daughters, there's a high possibility you'll like this lot too, so check out their video to single Spectre At The Fiesta below.