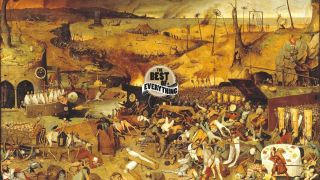 With centuries of dark and macabre imagery by some of the world’s all-time greatest artists to plunder – much of it public domain – it’s perhaps surprising that so many metal album sleeves are thrown together by a mate of the band with Photoshop or some coloured pencils. These are arguably the 10 most powerful and iconic examples of paintings from the past adorning the sleeves of 10 killer albums…

**DEEP PURPLE – Deep Purple (1969)
**The Garden Of Earthly Delights (c.1504) by Hieronymus Bosch
American psych-folk act Pearls Before Swine used the creepy eggy tree-man thing from the Hell panel of Bosch’s apocalyptic triptych for their 1967 debut sleeve; in 1969 the Purps focused on the bit just beneath that, where the birdlike Prince of Hell scoffs naked sinners and excretes them into his toilet-throne, surrounded by musical instruments being used for genital torture. Initially printed black and white by mistake, the band evidently preferred the monochrome effect.

BLACK SABBATH – Greatest Hits (1977)
The Triumph Of Death (c.1562) by Peter Brueghel the Elder
It wasn’t officially approved by the band’s management, but this 1977 NEMS sampler was the cut-price introduction to Sabbath for a generation of cash-strapped ‘70s kids who spent their pocket money in the Woolworths bargain bin, and it remains a charity shop staple. Brueghel’s merciless skeletal army laying waste to a burning village is thus forever associated with the primal howl of classic Sabbath, although this medieval aesthetic owes more to the painting being conveniently out of copyright.

CRYPTOPSY – None So Vile (1996)
Herodias With The Head Of John The Baptist by Elisabetta Sirani c.1660
There aren’t many 90s tech-death metal albums with sleeves taken from 17th century Baroque religious fine art – still less painted by a woman – but Elisabetta Sirani’s dispassionate depiction of a Biblical beheading on Cryptopsy’s breakthrough second album still strikes a more chilling impact than the lurid gore that dominated contemporary DM art. The album title is an accurate description of Herodias herself, who used her daughter to seduce Herod into decapitating the preacher for exposing her sins.

ANGEL WITCH – Angel Witch (1980)
The Fallen Angels Entering Pandemonium (c.1840) formerly attributed to John Martin
At a time when NWOBHM cover art was dominated by teenage comic strip amateurism, the epic immensity of the Angel Witch debut sleeve leapt from the racks with class and distinction. A turbulent depiction of Lucifer’s expulsion from Heaven – with God’s citadel in the background and the formation of Hell in the foreground – this Book Of Revelations tableau was traditionally credited to English Romantic landscapist John Martin; its derivation now seems more of a mystery.

CANDLEMASS – Nightfall (1987)
The Voyage Of Life: Old Age (1842) by Thomas Cole
The celestial elegance of this Swedish doom classic was neatly presaged in the first of two Candlemass sleeves from the work of English-born American landscapist Thomas Cole. The original is dominated by a beam of otherworldly light, here there’s just a pale suggestion of it encroaching on the murky darkness. The placing of the band’s gold logo between the ship of life and the redemption of Heaven is another pleasing touch.

BATHORY – Blood Fire Death (1988)
Åsgårdsreien (1872) by Peter Nicolai Arbo
Odin and his ravenous Valkyries swooping dramatically across an angry clouded sky; what better inaugural image for Bathory’s seminal assertion of Norse mythological themes? This was Norwegian painter Arbo’s thrilling depiction of the Wild Hunt of Norse myth – ghostly rampagers in the sky preying on earthbound victims alive or dead – an event likened to the noisy whirling tumult of black metal in the book Lords Of Chaos.

11 PARANOIAS – Stealing Fire From Heaven (2014)
The Temptation Of St Anthony (1945) by Max Ernst
Bizarrely, this mind-boggling surrealist vision was actually the winner of a competition to create a painting with this title for inclusion in a 1947 Hollywood movie, The Private Affairs Of Bel Ami. It also proved a fitting harbinger for the hallucinogenic, otherworldly atmospheres conjured by doom jam trio 11Paranoias. “It just fit,” guitarist Mike Vest told Metal Hammer. “It’s this organic obscure landscape, that’s pretty much the album.”

KANSAS – Kansas (1974)
Tragic Prelude by John Steuart Curry (1938-40)
The original mural dominates the Kansas Statehouse, trumpeting the arrival of kick-ass abolitionist John Brown in Kansas to lead the battle against pro-slavery forces in 1855 – an event presaging the American Civil War, hence its title, Tragic Prelude. Pomp craftsmen Kansas were so overawed by the 31-foot oil painting they instantly resolved to use the image for their first album cover; a chance meeting with a local gallery photographer clinched it.