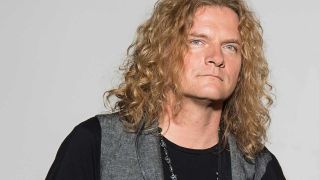 “There are a lot of great albums that I’ve loved over the years,” says Tesla guitarist Frank Hannon. “But there are certain records that are more than that. These are the albums that have helped shape the soundtrack of my life, to use a cliché phrase.”

For Hannon, albums released between 1976 and 1986 transcend all others. “I guess you’d call that period my ‘formative years,’” he says. “I was a young kid getting into music, so the albums that I listened to were very, very important to me. They were my escape, but more than that, they paved the way for my wanting to become a musician.”

Below, Hannon runs down the 10 records that changed his life.

“This is number one for me. I love live albums, and this is one of the greatest of all time. A lot of live records sound like crap, but Frampton Comes Alive! was recorded and mixed beautifully. The sound of Peter’s guitar and his voice is so crisp and clear.

"You feel like you’re right there in front of the stage. The audience is going nuts, too – the whole thing is so exciting. I played air guitar to this one all the time before I actually started playing."

“This one was a strong contender for the top slot. What can I say about Jimi Hendrix? He was on fire here – literally setting his guitar ablaze. My mom was a hippie, so she was playing this in the house when I grew up.

"This entire performance at the Monterey Pop Festival was historic. If you don’t dig this, you need to check your pulse or something."

“Most guitarists would say that hearing Jimi Hendrix was life-changing, and I can attest to that. When I heard Purple Haze for the first time, it was scary. The sound seemed to be so out of this world. I was like, ‘How is that possible?’

"This music was made 50 years ago, but it still sounds revolutionary. When I do my solo shows, I play a lot of Hendrix as my tribute to him. I fully admit that I’m still trying to master his songs."

“Man, I was so into Get Your Wings and Toys in the Attic – both perfect records. But I have to again go back to a live album. Just the raw, raunchy, real sound of Aerosmith mixed with the audience going crazy – this is really exciting stuff that captures the era perfectly.

"I started playing guitar with Frampton Comes Alive! and I was totally jamming to this one."

“Heart was one of the first female-fronted bands that I got into. They totally kicked ass. Great songs and phenomenal guitar playing. The way the acoustic and electric guitars blended on Crazy On You was a big influence on me.

"If you listen to Tesla, you can hear how I’m mixing acoustics – it’s Heart all the way. I’ve met Nancy Wilson, and I got to jam with the band’s original guitarist, Roger Fisher. As you can imagine, I was a total fanboy."

“Man, this is one of my favourites. The whole performance is stunning – there was no live band better than the Rolling Stones at this time.

"If I had to pick one moment that really stands out, it’s the breakdown in ‘Midnight Rambler.’ I get goosebumps every time I hear it. It’s scary and epic – talk about setting a mood."

“Before Ozzy Osbourne’s solo albums, the darkest and heaviest stuff that I had ever heard was AC/DC. Then I heard Randy Rhoads’ playing with Ozzy, and I just lost my mind.

"It’s been said before, but Randy changed everything. The way he mixed classical with metal was a cut above what everybody else was doing. I’d never heard chord changes like that before. He was a genius, no doubt about it."

“This album is the second part of a trilogy, but you don’t have to know that to appreciate it. It’s really far-out, psychedelic jams, and it flipped me out the first time I heard it. I never knew this band before, but when Tesla played in New York some crazy guys played it for me, and I just lost my marbles.

"If you want to get high without taking drugs, listen to this record. You’ll think your brain was taken over by aliens.”

“Johnny Cash had already done the Folsom Prison concert album, but I think this one is superior. His voice is bold and haunting – you can really feel his heart just pouring out to the prisoners. And they give back everything he’s giving them.

"There’s a lot of danger and sadness here, but there’s defiant joy, too. If you want to get familiar with Johnny Cash, this is where you should start."

“I could just say two words – Free Bird – and leave it at that. But, of course, the whole album is beautiful. There’s an honesty and earthiness to the songwriting that comes through on each track. You can feel how the band paid their dues playing dives and honky tonks – it’s there in every note they play.

"I love the Allman Brothers and bands like Blackberry Smoke, but this is some of the best Southern rock ever. From the time they came out to the end of their original inclination in ’77, Lynyrd Skynyrd ruled."