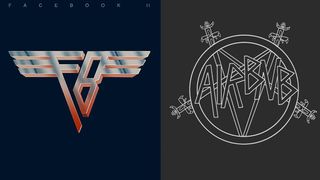 San Francisco based designer Sean Ross has taken the logos of a number of Silicon Valley tech giants and re-imagined them as Heavy Metal Album sleeves. Google’s familiar logo has been given a gothic twist and unceremoniously dumped on the cover of Dio’s Holy Diver, while peer-to-peer hometstay network AirBnB’s branding has taken on a distinct Slayer feel.

Sean tells It’s Nice That, “Having grown up in the 1980s, heavy metal music became the perfect spark for to explore these ideas, because metal does a pretty good job at visually representing what it actually is—loud, disruptive and shocking—anything but safe.

“Some of my first brand experiences were from studying and drawing the names of bands on my Pee Chee folder. There’s an honesty to them. Each one is differentiated in meaningful ways, but they also make sense as a collection of ideas”

For more of Sean’s work, check out his website.