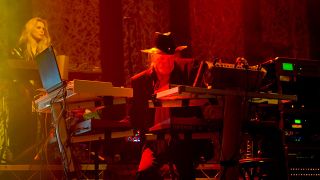 It was rather like being being at the Royal Opera House. Nobody even dared to breathe, especially in the first half of the show.

The audience was very subdued throughout

It was rather like being being at the Royal Opera House. Nobody even dared to breathe, especially in the first half of the show. At one point, someone called over one of the security people to complain there were two people actually daring to talk quietly, and insisted they go and shut them up! You have to wonder if you can ever enjoy yourself when you’re more concerned about what others are up to, than paying attention to the band.

Edgar Froese can still be flustered

There were points in the performance when the great man went through his guitar ritual. This consisted of picking up the guitar, carefully putting his hat on the neck of the instrument, strapping it on, and then replacing the hat. It was all carefully choreographed. But the third time he did this, the hat slumped off the guitar neck, and Froese got very flustered; it took him a while to recover his composure.

Not much of a stage show

While the band extensively used lasers at some European shows, and also on the Cruise To The Edge, there were none at this gig. And both the lighting and video back drop were a little lacking creatively. It was a bit of an anti climax. You’d had expected more of a tour de force presentation.

Thank goodness for the two girls at the back!

Both Linda Spa, who plays keyboards and a variety of wind instruments, and Iris Camaa, who is on percussion, were not only quite brilliant musicians, but gave the performance some pep and dynamism. Spa even came to the front of the stage a couple of times, and got a rapturous reception for her rock star posing. These two added glamour, plus a sparkle.

There were just so many themes played tonight that were immediately recognisable. From Sorcerer Theme to Sphinx Lightning and Grind, these are indelible musical magic. Ultimately, the Dream have always been about their music, and everyone was enthralled.