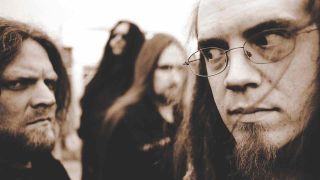 Back in the early part of the new millennium, Devin Townsend was, by his own admission, in a bad way. “To a certain degree my entire career has been based on me trying to unfuck myself,” he half smiles when asked to recall a difficult chapter of his life. “During that period I was screwed up, but totally by my own hand. This is no ‘Oh woe is me’ thing; I had just become totally fascinated and immersed in my creative process and I hadn’t had kids yet. I think, in hindsight, I was actively going out of my way to make myself crazy so that I could write crazy music.”

Today, we all recognise Devin one of as heavy metal’s true visionary voices, but in 2004 he was treated with a touch of suspicion by the mainstream metal world. Despite having put his name to records like Strapping Young Lad’s crushing City and his stirring and epic solo album Ocean Machine – both now rightly regarded as classics – he had yet to cross over to metal’s wider fanbase. Instead, he was almost exclusively being painted as ‘crazy’, a ‘mad scientist’ or an ‘eccentric’ by the rock press, who leaned heavily on his openness regarding his mental health issues.

“Now I can look back on it much clearer,” Devin sighs. “I realised that this romantic notion of putting yourself through these crazy things and abusing yourself to make crazy music, just results in your life being personally crazy and fucked up. I didn’t think that was going to happen, but I suddenly became really sensitive as to how I was being perceived. These things that I had proposed of myself as – callous and sadistic and unhinged – they were just fear more than anything.”

So, as Devin headed into the studio at the end of 2004, feeling burnt out from a decade spent embracing all manner of negativity through Strapping Young Lad and self-medicating himself heavily with drugs and alcohol, he did so in the knowledge that the band would very soon be coming to an end.

“I felt like I had taken that project as far as it could go,” he says. “There was very little left that I thought could say in that manner. It was exhausting. The studio was crazy; I was just surrounded by lots of soft drugs and stupid people.”

An album still needed to be made, though, and despite the mounting problems Devin found a way to write a record featuring a song that would, against all the odds, give him the commercial breakthrough that introduced him to a whole new fanbase.

“I brought Love? in to jam one day,” Devin tells us. “We started working on it and then Jed [Simon, SYL guitarist] came up with the ‘duggy-duggy-dah-duggy-duggy-dah’ riff, and we arranged it so there were those two main riffs together. Then, for the chorus, it was really important to me to come up with something memorable, whether it’s brutal or not. It’s not from a commercial slant; I just need something to sink my teeth into.”

Devin did indeed manage to come  up with something memorable. Well, maybe not ‘come up with’, in the strictest sense of the term, but hey, a little plagiarism goes a long way.

“I really needed to get this chorus right,” he laughs. “And so, the chorus on Love? is a direct rip-off of a song from Yes’s 90125 album. There is a song on that record called City Of Love, which is basically the chorus to Love? – even the name is the same! A few months ago Machine Head did a song and a bit of it sounds kinda like Love? and all these kids were giving them shit about it, like, ‘Oh you guys! Why did you steal from Strapping Young Lad?’ Well, just so you know, I ripped off somebody first! It only seems fair that it goes the same way.”

With the album, entitled Alien, in the bag, it was now time for a lead single to be chosen from the album, and Love? stood out a mile. Considering how challenging much of SYL’s material up until that point had been, the song even represented something with potential crossover appeal. Not that Devin sees it that way.

“No!” He immediately shoots back when asked if he saw the song as a gateway to huge arenas and a lavish rockstar lifestyle. “Before that I had Ocean Machine and Infinity; there are far more songs that are ‘commercial-sounding’ on those records than Love? There seems to be this common misconception of my career that I’m trying to achieve this commercial success by writing commercial songs. The truth is that I just love Def Leppard, I just love Enya, I just loved The Eurythmics and Broadway musicals and pop. In fact, it’s been much to the label’s chagrin when they say, ‘Oh, why don’t you do that again’, and I tell them that I’ve done it so I’m going to go and write a record about a cheeseburger.”

So, it was more a happy accident than by design when Alien was released on the March 22, 2005 and became SYL’s best-performing record commercially, peaking at No.32 on the Billboard Heatseekers Chart. Much of its success was down to its lead single.

“For the majority of my time in that band, I really wrote music to stop people paying attention to Strapping Young Lad,” Devin shrugs. “And when you listen to that record, Alien… dude, it’s a heavy, brutal, dark, angry record. Songs like Skeksis, Shit Storm, Info Dump… those aren’t nice songs. So, it’s kinda fun to have Love? on there and, truly, the only reason it turned out like that was because I walked into the studio one day with that chorus in my head.”

Another contributing factor for the song’s success was its video, which took inspiration from Sam Raimi’s classic 1983 video nasty The Evil Dead, and saw the band playing in a cabin similar to the one from the movie and being pursued by a supernatural force. It’s a great, fun video, one that perfectly suits the song and, bearing in mind the link between heavy metal and horror movies, makes a great deal of sense. But, if Devin had his way…

“I have a really hard time with horror movies,”he says. “I have a horrible time with sadism and guts and gore. I just don’t know why people invest their time making art like that? But, weirdly, I really like Evil Dead, particularly the third one, Army Of Darkness. I thought that was great. It got proposed to do a version of that. But I hated the whole shoot. I did not get on with the director, and it all just felt a little too Los Angeles, a little too artsty and self-important. I looked around and thought, ‘What am I doing here?”

There was one moment in the video shoot that Devin does admit to enjoying, though…

“I had this absolutely horrible hair at the time,” he laughs. “They hired these very lovely make up ladies for the shoot and at one point they came over and offered to give us all a scalp massage while we were in our make-up. I do remember thinking, ‘I guess it’s not all bad!’ Ha ha!”

As the band went out and toured the record, Devin eventually began to come to some sort of realisation and resolution to his problems post-Alien. “I definitely learned everything that I needed to learn and move on with from that period,” he tells us. “My behavioural patterns started to change in the aftermath.”

And we even got one more Strapping Young Lad album in 2006’s The New Black before the band did split and Devin Townsend embarked on his next set of projects. Still, Love? remains a song that he is rightfully proud of.

“I love it, it still sounds great to me,” he nods. “Am I the same person now as I was then? No. Do I still feel the same way now as I did then? Definitely not. But I can still look back at it and see it for what it was: a snapshot of my life at that point. And in some ways, that’s why every song I’ve ever done will always be as important to me as the latest one that I have out now. All I can tell you is, at the time, I did my best. I couldn’t have done any better.”

You’d think that would wrap the story up, but not quite. Before we go, Devin recounts us with a chance meeting he had with one of the men that inspired the creation of Love?.

“We did this prog-rock cruise a few years ago,” he smiles. “And my tour manager calls me up and said, ‘Jon Anderson [former Yes frontman] wants to meet you.’ I was like, ‘Holy Shit!’ I was just thrilled. We set up this dinner, and my friends are there, I’m telling them that one of our heroes wants to meet me, he walks in, my tour manager says, ‘Jon, this is Devin’ and Jon Anderson goes, ‘Who is this guy? That’s not the guy I wanted to meet!’ Turns out he wanted to meet Anathema! I busted his ball for that, but, to be fair to him, he stayed and chatted with us until Anathema came down. It was actually a really fun, funny experience.”