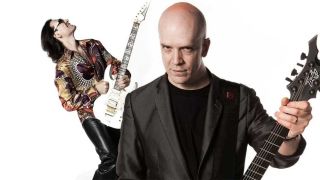 Steve Vai has made an indelible mark on heavy music. Even before emerging as one of the world’s premier six-string virtuosos, he played with prog legend Frank Zappa and in Dave Lee Roth’s solo project.

In 1990, he collaborated with Ibanez to create the first mass-produced seven-string guitar, which paved the way for nu metal and technical bands like Meshuggah. Then, while making 1993’s Sex And Religion, he introduced the world to a 19-year-old Devin Townsend.

Their relationship fractured due to creative differences, but over time they reconnected; Steve recorded voiceovers for The Devin Townsend Project’s Ziltoid shows, and the pair teamed up to revisit Sex And Religion songs at last year’s Starmus festival in Norway. We asked Devin to interview his old mentor.

Devin: Hey Steve! Why did you first pick up the guitar? Was it the guitar from the very beginning?

Steve: “Hi Dev! I was always fascinated with composition. One of the records in the house was West Side Story; it had a big impact on me. But when I was about seven, I saw this kid playing guitar in school – it was an epiphany. It was the most beautiful thing I’d ever seen. It seemed out of reach because it seemed so cool, so I never really touched it until I was about 12, when my sister came home with Led Zeppelin II. That’s when I decided I really wanted to play. The only other thing I played was tuba in the high school band.”

Devin: “Yeah dude! That was my thing all through high school. I originally picked it because it was the most obnoxious instrument, but after a while I was like, ‘Wow, there’s a lot of power in this thing.’”

Devin: “When the teacher was out the room, we’d pour soda and water in it. The teacher would be like, ‘Man, you need to empty your spit valve,’ and when you did it was just… [outlandish amateur talent show] The Gong Show.”

Devin: What do you think made the guitar so alluring to us back in the 70s and 80s, in a way it seems it isn't to kids today?

Steve: “It’s obviously a cool-looking instrument – it hangs off you, it’s kinda phallic, it takes two hands to wield – but the thing that struck me was the sound made when the strings crash, that clang, this resonance unlike anything else. That was the immediate power. When we first started playing together, I was stunned at your command of the instrument – you’d obviously put in a lot of practice.”

Steve: “Ha ha! Things ebb and flow. With the evolution of technology, there’s a lot more distraction for young people. When people ask me if the guitar is dead, there’s always a contingent that take it to a different level – this whole underground subculture of shredders playing the thing in mind-boggling ways. Once that rare individual comes along with the perfect blend of fresh perspective, sound, structure, look… when that happens again we’ll see a shift. That’s how it’s always been.”

Devin: I agree. It's truly interesting to meet your heroes and learn from them. When you joined up with Zappa, how socially awkward was he?

Steve: “I wouldn’t say Frank was socially awkward. He was adaptable, but in any situation what was miraculous was how intuitive he was. When you were talking to him, you had his 100% attention. It was intimidating in a sense; he could read you.”

Devin: “Maybe that’s what made him such a fascinating musician. In my experience, the type of musicians most efficient at articulating emotions are the ones who are prepared to listen.”

Steve: “Great call. He was absolutely creative all the time, constantly in the mood for in-the-moment creativity. It was so fun to watch. He was like a teenager – excited, tweaking and adding things, laughing while doing it; he never stopped.”

Devin: I was convinced that the idea of creating art in a fundamentally chaotic universe seemed like egocentric wank, but then I started thinking that art is of true value to the species. Here's the question: how much time do you take for yourself away from writing music?

Steve: “I’ll get to that, but I want to address what you said about creation being about ego. The funny thing is, if a person creates music so everyone knows how great they are, it usually sounds insincere. But the true artists, there’s something in them that doesn’t have a choice. I see it in you, I saw it in Frank.”

Devin: “In the process of creation and the compulsion, I’m not able to see anything until I’ve articulated it, and then you’re able to say, ‘Oh, that’s what I was feeling.’ I think compulsion is tied to mental health in some people.”

Steve: “I go on vacations, spend time with my family, but I cannot lie and tell you that there’s not something in me that’s always feeling like I should just be working.”

Steve: “Lately I’ve struck a bit of balance. You nailed it – it’s about realising what’s true creative compulsion and what’s your ego. When I was younger, one of the reasons I had to know music notation, theory, was because I felt inferior and had to have something over everybody else.”

Devin: Prior to hearing your music as a kid, for whatever reason I was really interesting in meditation. so when you came out with the Passion And Warfare album [in 1990], that really had that aesthetic attached to dit. What would you say to the new generation of musicians, in light of that part of your trip?

Devin: “For people reading this interview who don’t want to meditate, how could we summarise what we’re talking about into a statement?”

Steve: “Be friendly with yourself. Realise that stress is an option. It’s empowering when you realise that you’re OK; you have all you need, and to get in touch with it you have to see what’s obscuring it – let your instincts guide you to what you like to do in life the most.”

Devin: “I think people would see folks like you, or even myself, and they’d say they’re capable of doing something in the music industry because they’re fundamentally different. I read something the other day, any of these iconic world figures, Steve Jobs, Elon Musk, they didn’t have a leg up – they just went for it. Of course there are things that can happen fortuitously or you can get help, but there’s no rulebook that says you can’t do something the way you think it should be done. Whatever it is that moves you is where you should focus your energies.”

Steve: “That’s what life’s for, to be inspired by creative ideas and align with them in the knowing that all the cooperative components required for you to manifest them are here now and they’re there for you.”

Devin: You're a guitar hero to myself and generations of musicians. Did it ever become a hindrance to have that level of expectation projected on you?

Steve: “The expectation is not from the outside world, you create it in yourself. It’s almost impossible [for it not to be a hindrance]. I never thought I was good enough to be recognised as a unique guitarist by any stretch of the imagination. To some extent, I still don’t understand it.”

Devin: “Maybe that’s why it worked out for you. My thought was, ‘I’m too awkward, too odd, so fuck it, I’m just gonna do what I do.’ That’s why Steve Vai is Steve Vai, because what people hear in you is something no one else can be.”

Steve: “I’ve watched myself perform, and my body moves weird! I’ve thought, ‘I’m not gonna do that anymore, it looks ridiculous’ but I fucking can’t help it! I’m not gonna stop! You do that too man, it’s so obvious.”

Steve: “No! I mean you’re authentically you, and the nature of our relationship now is very different than what it was before.”

Devin: Very much. What do you remember about us working together in the 90s?

Steve: “I wanted to put a band together and I asked labels to help me find a singer. They sent me this tape of you and I was blown away. I wasn’t interested in co-writing, I wanted someone who could sing well – I didn’t know the depth of your musicality. It was tough for you, because I wanted it my way, and even though you were young, you were wildly creative. In hindsight, the things we did where I loosened up and said, ‘Hey, let’s collaborate’, are the things I now like the best. You have every reason to hate my fucking guts.”

Steve: “I became a fan and I’m happy for you, and for the things we get to do together now and then. We grew together in different ways but powerfully through each other.”

Devin: “When I was a teen, your music was a huge thing for me, and when we met I had a lot to learn but I didn’t realise. To be with somebody who was a mentor to me, I was able to learn my strengths and weaknesses and get to the point I’m at now. [To Hammer] Steve and I have been working on an email-type collaboration. It’s nice because our relationship has evolved over such a long arc, to be able to mirror that with music is important.”

Steve: “Just two guys kicking shit around, not caring what anyone’s gonna think, and trying to find a side of ourselves we wouldn’t have if we were alone. If it turns into one song, if it turns into an album, who knows? I’m not used to collaborating, and I’ve said this in the press, it isn’t a wank – when the press ask, ‘If you could collaborate with anyone dead or alive?’, my answer is Devin Townsend, always has been.”